As one of the original developers of RTCP, NUM continually enhances the function to meet the changing needs of machine builders and end-users. The company’s implementation of RTCP includes twenty-four predefined kinematic configurations and its Flexium+ CNC systems can accommodate different kinematics on the same machine – for example, when different milling heads are needed. 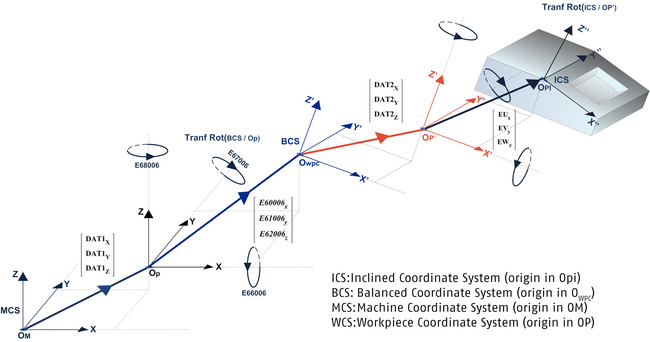 NUM’s basic RTCP function, invoked by ISO code G151, offers a number of user-specified variants. The function can be activated with an inclined coordinate system or after a positioning move. In either case, the CNC system automatically calculates the mechanical offset to ensure that the tool centre point is always in touch with the defined workpiece surface while the rotary axes are moving. The RTCP function can also be activated by the actual positions of the rotary axes.

Until now, programming 5-axis machines has often been considered an onerous task. The rotary axes are usually programmed directly with their angular position, which has the advantage that the position of the machining head can be imagined when viewing the part program. The disadvantage, however, is that the part program depends on the kinematics of the machine, and cannot be transferred to another 5-axis machine without modification.

The tool vector programming option of NUM’s RTCP function enables the direction of the tool to be determined by the vectors’ components along the X,Y and Z axes, rendering the part program independent of the machine kinematics.

The RTCP function in NUM’s Flexium CNC software can now be activated by the actual positions of the rotary axes.

In some circumstances, aligning the workpiece to be processed on the machine can be a complex procedure. In these cases, to increase productivity, instead of moving the workpiece, NUM’s Flexium+ CNC system can now compensate for positioning deviations (including angles) by applying appropriate correction values. The workpiece remains misaligned, but the CNC system is aware of the deviations and compensates for them automatically.

NUM’s Flexium software, version 4.1.00.00 or higher, now features a special HMI (Human-Machine Interface) to allow the corresponding correction values to be entered. The coordinate system resulting from the shifts and rotations is called a ‘Balanced Coordinate System’ (or BCS) and the compensation function is known as 3DWPC (3D workpiece compensation).

Additionally, the software now includes a function to help machine users accelerate the roughing operation’s tunings and then achieve optimal surface finishes. Invoked by ISO code G732, the new function simplifies parameter optimisation and automatically computes pre-settings for roughing and finishing, with adjustable smoothing levels. The machine operator can select a range of attributes – such as profile tolerance, permissible chordal error and segment length – and invoke an optional smoothing algorithm to reduce mechanical shock and smooth the workpiece surface.

To further help machine operators achieve optimal results, NUM has also introduced a new algorithm that keeps the pivot point at constant speed. Part programs generated by CAD/CAM systems invariably comprise a multitude of small G01 segments – in the case of rotary axes, these are often distributed inhomogeneously – resulting in speed variations which affect surface quality. The new algorithms maintain constant speed at pivot points during the movement of rotary axes, allowing the discontinuities to be smoothed, resulting in an improved surface.

Five-axis machining, in which the tool is oriented in relation to the machining surface, has really come to the fore in the last few years. Machine tool builders are increasingly developing new kinematic configurations that capitalise on this technology, to help end-users further improve the performance of their machining operations.

A key factor behind the success of five-axis machining was the introduction of the Rotation Tool Centre Point (RTCP) function for CNC systems. NUM was an early developer of this function, which makes interpolated points track correctly by applying real-time compensation for the motion of the rotary axes.

More in this category: « Report shows optimism amongst SME manufacturers, despite staffing and supply chain issues ANDRITZ to supply new pickling line for aluminum strip to AMAG Rolling GmbH »
back to top