Until now, most linear motors on the market have been designed for general-purpose automation involving fast A-B positioning capabilities but relatively low duty cycles. NUM has taken a more conservative design approach, waiting until the market matured before creating a linear motor expressly intended for continuous operation in the harsh environment of modern machine tools. 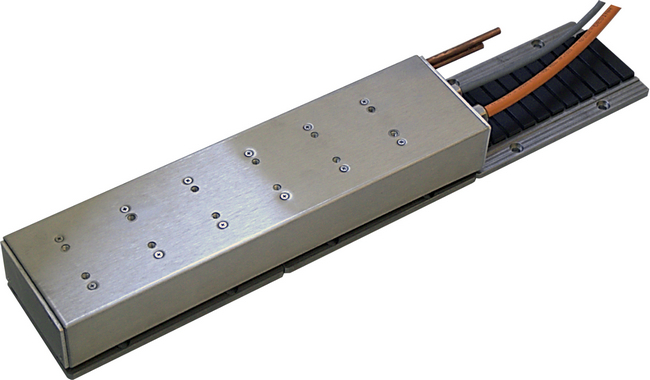 LMX linear motors comprise a metal track with multiple embedded rare earth magnets, and a coil assembly supported by a customer-supplied guideway. A key feature of the motors is that they are designed to operate with a comparatively large air gap of 1 mm, to reduce the impact of mounting tolerances on performance characteristics. For most machine tool applications, the track is held stationary and the coil assembly is free to move – but converse mounting arrangements are also practicable, with similar performance attributes.

Suitable for use with standard 3-phase sinusoidal brushless servo drives, NUM’s LMX series linear motors are especially cost-effective when teamed with the company’s NUMDrive X or new NUM DrivePro drives. Both these families of high performance drives feature a high degree of functional integration, making them some of the smallest on the market, and offer extensive safe motion monitoring and control options to help simplify design-in.

NUM produces a wide range of electric motors, including spindle, servo, torque, synchronous and asynchronous, and now linear. According to Massimiliano Menegotto, Managing Director and CTO of NUM Group, “Choosing the best kinematic solution for any machine often involves a tradeoff between various technical factors. NUM can support machine designers, during the machine's development phase, with the selection of the most appropriate solution."

More in this category: « Securing the future of spring manufacturing Metso Outotec to deliver filter services to platinum plants in Africa »
back to top