IDTechEx Asks If There Is Untapped Potential for Capacitive Sensors

Ever wondered how a touch-sensitive screen works? The answer is capacitive sensing, which can detect the presence of your finger through the protective glass sheet and doesn’t require any pressure. However, this perhaps under-appreciated technology is not limited to touch-sensitive displays: it is increasingly being utilized for many other established and emerging applications, ranging from automotive controls to leak sensing and even eye tracking.

How Does Capacitive Sensing Work?

Understanding the operating mechanism of capacitive sensors is key to understanding the applications to which they are well suited. Briefly, the sensors work via capacitive coupling to detect objects that have dielectric properties substantially different from air – fingers, being mainly water, work well. Since electric fields can travel through dielectric materials such as air or glass, there is no requirement for electrical contact. However, depending on sensitivity and readout methodology, the object being sensed often needs to be close to the patterned conductive layer, which is why it’s often difficult to use touchscreens or other capacitive controls while wearing gloves.

Although capacitive sensing is widely associated with touch-sensitive displays, it is also increasingly used on opaque surfaces. These include car steering wheel controls and touch panels – the conductive material used to make the capacitive sensor is sometimes a transparent metal mesh so that the controls can be backlit. Capacitive touch sensing is also an essential feature of in-mold electronics, in which conductive traces and LEDs are first printed/mounted on a flat substrate, then thermoformed, and finally, injection molded.

Moving from conventional mechanical switches to capacitive switches brings multiple benefits: fewer components, a reduction in materials used, an interface that can be wiped clean (since there are no grooves between buttons), and a sleek modern aesthetic. However, some drivers have expressed concerns that capacitive sensors are less tactile and hence more difficult to use while driving – integrating haptic feedback is a possible solution. 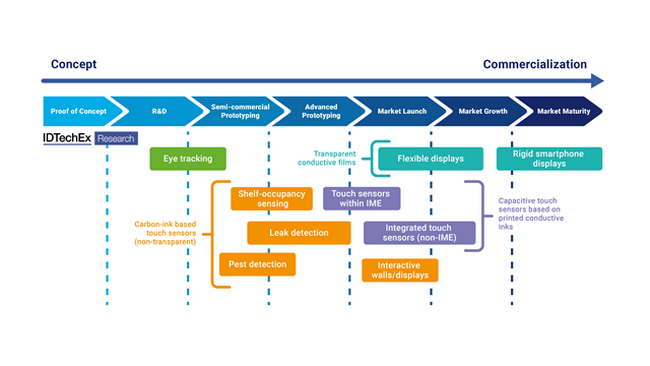 As anyone who has tried to operate their smartphone in the rain will attest, capacitive sensors are extremely sensitive to water due to its high dielectric constant. While this might be undesirable on a touch-sensitive display, it does enable capacitive sensors to be used for leak detection.

By utilizing low-cost materials such as carbon inks printed onto plastic using conventional methods, it is possible to produce rolls of printed/flexible sensors for just a few dollars. These can then be placed around plumbing, under kitchen appliances, and even along pipes – a small control unit housing a circuit board with a micro-controller and batteries measures the changing capacitance. If a leak occurs, a change in capacitance is detected, and a signal is sent to an app to provide a notification. This capability is proving compelling to insurance companies since limited capital investment would substantially limit the property damage caused by any leak.

Perhaps the most surprising emerging application of capacitive sensors is an early-stage technology that provides eye-tracking for virtual/augmented reality glasses. Based on multiwalled carbon nanotubes (MWCNTs) embedded within paper to produce a conductive material with a very large surface area and hence high sensitivity to changes in the dielectric environment. Utilizing three sensors enables projected capacitance, in which the relative response of each sensor enables the location of the change in dielectric properties of the target object to be determined via triangulation. Compared to competing approaches such as machine vision, capacitive sensing promises a much shorter processing time and hence a more responsive system.

IDTechEx guides your strategic business decisions through its Research, Subscription and Consultancy products, helping you profit from emerging technologies. For more information, contact This email address is being protected from spambots. You need JavaScript enabled to view it. or visit www.IDTechEx.com.

More in this category: « Winners of the WorldSkills Competition 2022 Special Edition in Denmark raise the bar in automotive car painting skill and sustainable practices Innodisk Proves AI Prowess with Launch of FPGA Machine Vision Platform »
back to top