Fluke, a global technology leader in the manufacture of compact, professional electronic test and measurement tools and software, has just launched a new CO2 emission indicator to the online LeakQ reporting tool. In addition to the existing estimated leak size and costs, this new feature adds a third element: the estimated electricity-related CO2 emission in relation to the identified leaks.

Maintenance engineers and sustainability managers who work with compressed air and gas distribution systems every day can be unaware of exactly how much gas and energy is wasted due to small leaks in the system. For compressed air applications, LeakQ used in conjunction with Fluke’s online CO2 emission calculator enables users to quantify the financial value and environmental impact of detecting and fixing leaks in the system by creating detailed reports from images that have been captured using the Fluke ii900 Industrial Acoustic Imager and ii910 Precision Acoustic Imager. 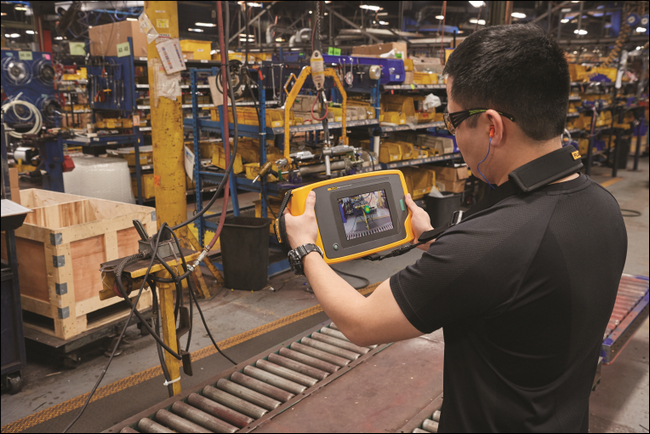 Approximately 90% of all processing companies use compressed air in some aspect of their operation, such that it is sometimes referred to as the fourth utility. It is estimated that if there were no maintenance systems in place at all, the losses due to leaks in the network would be between 25-30%. Whilst desirable, it is highly unlikely that any plant will achieve a 100% leak-free compressed air system.

Compressing air is an energy-intensive process and as such any leaks in compressed air systems mean a significant proportion of the electricity used by a compressor to compress the gas should be perceived as energy waste. Due to the energy-intensive process, and the potential environmental impact of electricity production, the ability to quantify the environmental and financial value of maintenance is helping companies drastically reduce their energy (costs) use and carbon footprint.

Typical leaks to focus on are quick connect leaks in a joint or interface that isn’t threaded, open-end leaks in large holes or open-ended pipes, threaded coupling leaks via metallic threads or weld cracks, and leaks in rubber, flexible and plastic hoses and pipes. Standard leak detection tools only measure dB on a narrow frequency band but LeakQ carries out an automatic scan of the full frequency spectrum and captures the actual frequency range that the leak is generating. This makes estimations far more representative of the real leak rate than those that are achievable using more traditional measuring tools. 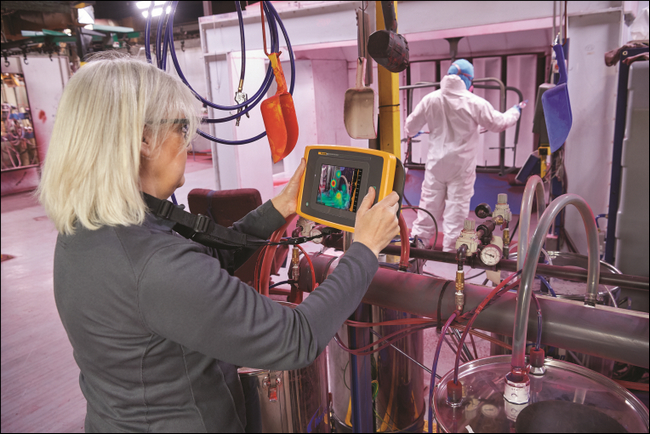 To develop a report and estimate the potential costs of leaks, the user simply transfers inspection data from the ii900 or ii910 to a computer, where they can be dropped into the online LeakQ report generator. The user then inputs the operating variables such as gas type, pressure, cost of electricity and System Specific Power ratio, which is a measure of compressor efficiency. The report generated will include a summary of all the leaks listed as well as their estimated individual and annual volumes, costs, and emissions. Leak images are also inserted into the report which can be shared as a PDF or downloaded as a CSV file for importing into existing maintenance systems. A feedback option enables users to relay their experiences directly back to Fluke so that the company can continue to make the leak detection tool better and easier to use.

Tako Feron, Global Product Manager of Acoustic Imaging at Fluke said: “Being able to prioritise, quantify and cost leaks in such a simple way is a game-changer for maintenance engineers who will be able to see the full financial and environmental impact of even the smallest leak in a compressed air system. Having the ability to reduce electricity usage is clearly a major bonus at any time but particularly in this challenging climate regarding the cost of energy. At the same time, it is essential to minimise leaks in compressed air systems if we are to meet our crucially important sustainability targets.”

Feron adds: “It’s estimated that around 90% of companies use compressed air in some aspect of their operations and the majority of this is generated on-site. That means it is down to the user to keep the costs of compressed air as low as possible and the LeakQ™ leak detection reporting tool provides an extremely powerful means of helping them to achieve that goal.”

About Fluke: Fluke’s mission is to be the world leader in compact, professional electronic test tools. The company’s products are used by technicians and engineers in service, installation, maintenance, manufacturing test, and quality functions in a variety of industries throughout the world. Founded in 1948, Fluke has offices in 13 European countries and distributes its products to over 100 countries around the globe. The company’s European revenues contribute approximately 40 per cent of worldwide sales. Fluke’s headquarters are located in Everett, Washington State and the company employs over 2,500 people internationally. Its European sales and service headquarters are located in Eindhoven, The Netherlands.

FLUKE is a registered trademark of Fluke Corporation. For more information, visit the Fluke website at http://www.fluke.com.