Caldera Heat Batteries has secured a £295,000 grant from the Department of Business Energy & Industrial Strategy (BEIS) for a feasibility study on how to roll out thousands of Warmstone heat batteries for use in industrial settings.

The Southampton firm has developed, and already begun to deploy in residential settings, a zero-carbon heat battery, known as Warmstone, which stores heat energy using renewable electricity (either off-peak or generated on-site) and can be released when required as high-pressure steam – the main source of heat for many industrial processes including pharmaceuticals, food processing and brewing.

They have received £295,478 Phase 1 funding from the BEIS Industrial Fuel Switching competition to investigate the design and build of a UK factory capable of rolling out Caldera heat batteries to support the rapid decarbonisation of British industry. 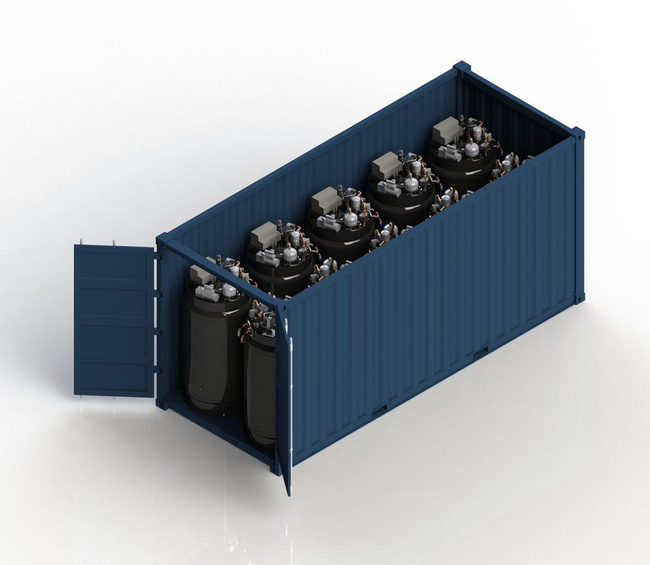 “Industrial steam makes up 31 percent of the UK’s total industrial process heat requirement. This is normally provided by multiple steam boilers and accumulators that burn natural gas or oil.

“Warmstone is a direct replacement that can provide steam on demand. Single or multiple units contain solid Warmstone material which can be heated up using cheap off-peak electricity and on-site renewables such as solar PV which can be stored with very high efficiency until needed.

“Banks of Warmstone heat batteries can then deliver high-pressure steam as required at temperatures up to 200C. This will enable factories to switch off fossil fuels as their primary fuel source, enabling an easily adopted route to low carbon electrical power.

“The adoption of Warmstone heat batteries avoids these risks due to the low quantity of water used without combustion,” Macnaghten concludes.

“As we accelerate the UK’s energy independence by boosting clean, home-grown, affordable energy, it’s crucial that our industries reduce their reliance on fossil fuels.

“This investment will help them to not only cut emissions but also save money on energy bills, on top of supporting jobs by encouraging green innovation across the UK.”

According to the UK Government, industry accounted for 16 percent of UK greenhouse gas emissions in 2018, making it the third-largest emitting sector – therefore meeting the Net Zero target requires near-complete decarbonisation of UK industry. The Committee on Climate Change (CCC) estimated that decarbonising industry will take c. £8 billion in public and private investment a year.

The BEIS Industrial Fuel Switching competition aims to address this by providing innovation funding, as part of the £1 billion Net Zero Innovation Portfolio, to develop fuel switching and fuel switch enabling solutions for industry, while building the UK’s decarbonisation skills and supply chain.

The competition supports the recently published Industrial Decarbonisation Strategy (March 2021), which identified that government investment is required to advance the development of low carbon technologies to address the barrier around uncertainties associated with novel technologies for the private sector.

More in this category: « Seeq and Customers to Showcase Benefits of AWS Partnership at Hannover Messe Connectors and Wearin Launch Conextivity Technology Group »
back to top