Mexico was among the first countries globally to announce the phase out of coal power by 2030. However, the country has retracted from the plan and does not have any phase out policy presently. As a result, the coal power capacity in Mexico is likely to marginally decrease from 6.02 GW in 2020 to 5.67 GW in 2030. Despite this minor dip, the thermal power generation will continue to dominate till 2030, says GlobalData, a leading data and analytics company. 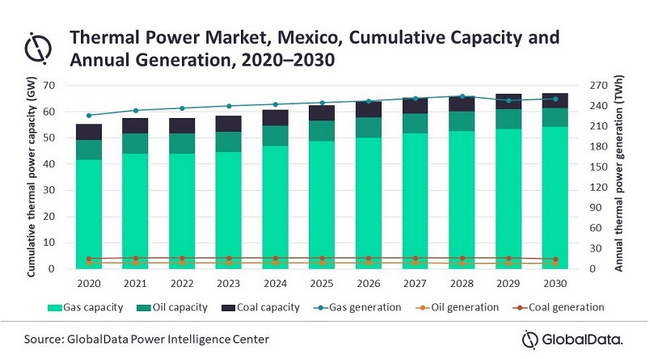 In March 2021, the Mexican Government passed an energy bill that favors government-owned generating plants that majorly run-on fossil fuels. Under this new bill, electricity will be bought first from state-owned hydroelectric plants and those that run on coal and oil.

Mr. Ravetkar concludes: “Steps taken by the Mexican Government such as not raising their targets for reducing CO2 emissions under the Paris Agreement, passing an energy bill that favors electricity generation from fossil fuels and the purchase of two million tons of coal for power generation shows that power generation from fossil fuels is there to stay in the country for a long period of time. The government’s lack of support for renewable technologies is expected to reduce the interest and investment of foreign companies in the country’s renewable sector.”

More in this category: « Let's not waste time and energy East Anglia Hub design contract clinched by UK’s Wood Thilsted for its next generation turbine record and cost focus »
back to top