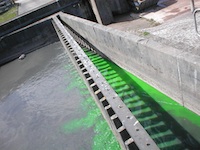 United Utilities has some 9000 projects ongoing in the current AMP, investing £787 million in 2012/13 – about £100 million higher than the previous year. Cumulative investment across the first three years of AMP5 is now just over £2 billion.

The Capex, said CEO Steve Mogford, reflects a smoother and more effective investment profile than the previous five-year cycle. The company, he added, is on track to deliver the five-year programme within the regulatory allowance of around £3.5 billion.

The utility recently recorded its best performance for many years on the Environment Agency’s operational performance metrics, and Mogford promised more investment in the wastewater network to help adapt to changing weather patterns.

For 2012/13, United Utilities returned to a minimum of 'stable' on all its key serviceability measures – having last year seen the rating for its wastewater infrastructure slip from 'stable' to 'marginal'.

"In AMP4, our poor performance in delivering our regulatory commitments led to us receiving a shortfalling revenue penalty of over £80 million at the last price review. Whilst we still have two years to go in this AMP, our performance to date is significantly better than in the last five-year period," he reported.

United Utilities is considering extending its integrated pipeline network between Manchester and Liverpool to north west Cumbria to improve security of supply there, according to its CEO.

Following a £100 million-plus investment, the pipeline is now contributing to United Utilities integrated water network and helped keep customers supplied throughout the dry period in the first half of 2012.

Reviewing other major projects, Mogford said a £200-million Liverpool wastewater treatment works expansion – the utility's largest capital programme in AMP5 – was progressing within budget and ahead of schedule.

The extended treatment works is expected to come online in early 2016 and will treat up to 11,000 litres of wastewater per second – helping the rejuvenation of the River Mersey.

The project is intended to reduce the number of spills to the River Ribble from combined sewers and contribute to significant improvement in bathing water quality in the Ribble Estuary and along the Blackpool coastline.

Looking ahead, Mogford said new and more stringent environmental legislation, such as the European bathing water standards coming into effect from 2015, would drive further investment in wastewater assets.

In response to Government plans to reform water abstraction arrangements in the UK, United Utilities has launched a pioneering scheme to restore two rivers in the Trough of Bowland in Lancashire.

The project, which is in conjunction with the Environment Agency, is helping to rejuvenate the rivers by taking less water for the local population in dry periods.

To compensate for any resulting shortfall of water for homes in the area, United Utilities is building a new £12 million pipeline to connect the local water treatment works to a nearby service reservoir.

"Partnerships like this will increasingly become a way to deliver the changes needed as we adapt to climate change," said Mogford.

More in this category: « Southern Water adds heat exchanger for poo-power Pfannenberg Highlights Thermal Management and Signaling Solutions for the Water Industry »
back to top