The last five decades have seen tremendous advances both in robotics and in CNC machining centre technology. In recent years manufacturers have begun reaping the benefits of bringing these two technologies together and robot tending of CNC machines is already helping to improve productivity for many businesses. However, there is more to come from these two important technologies thanks to the development of a single programming environment for both.

Barry Weller, Product Manager at Mitsubishi Electric, looks at the evolution of these two technologies, and the new possibilities for machine builders and OEMs to develop an important competitive advantage in the design of CNC machining centres, making it easy for their end users to reap the full benefits of automation.

A journey through the last 50 years of automation technologies is a story of increased sophistication and of democratisation. The products that were once state-of-art just a few decades ago would look like children’s toys today, while the high cost meant they were only available to a select few. The modern equivalents, while orders of magnitude more complex, are at the same time more compact, simple to use and readily affordable. Even on some of the biggest machinery assets where investment is still significant, the return on that investment can often be measured in months thanks to the increased productivity they deliver.

CNC machining and robotics are two good examples of this pattern. While CNC (computer numerical control) technology actually dates back to punch card programming of machines as early as the 1950s, CNC machines as we’d recognise them today – offering multi-axis, fully automated, computer-controlled milling and machining – are really quite a recent innovation. And with them has come a growing need for operators of this specialist equipment, with the Institute of Technical Trades US boldly claiming in 2016 that in many industries up to 40% of job positions would be in the field of CNC. 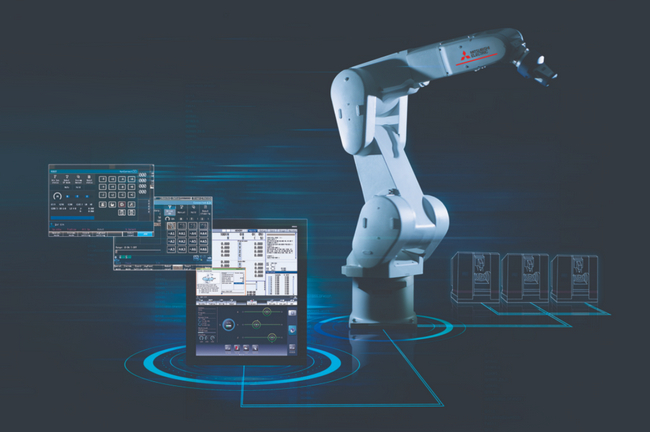 With Mitsubishi Electric’s Direct Robot Control, a robot can be programmed using G-Code in the CNC machining centre itself.

Robotics has seen a parallel evolution. The first industrial robots were developed in the late 1950s, with the Unimate in 1961 being the first commercially used industrial robot, lifting and stacking hot metal parts on a General Motors assembly line in New Jersey, USA. Another notable development came in in 1969, with Standford University presenting the first all-electric, 6-axis articulated robot – a combination of rotary, revolute, prismatic and spherical joints.

The 1970s brought the first robot arms as we’d recognise them today, with PUMA (Programmable Universal Machine for Assembly) arms which employed only revolute joints, increasing the dexterity of the arm. At the same time, elementary computing to control the position of the arm was introduced.

The 1980s saw a new take on robotics, with the University of Yamanashi in Japan pioneering a robot technology it called SCARA – selective compliance articulated robot. The arm had only four joints and was able to move in just X, Y and Z directions – hence the term ‘selective compliant’. But it had a number of advantages over more complex 6-axis arms, including speed, installation footprint and price. Mitsubishi Electric was one of the companies that commercialised the technology, and it quickly followed that development with the launch of a compact, 6-axis version that brought more dexterity to complex assembly processes.

Over the last 40 years Mitsubishi Electric has followed up those developments with the design of some 14 different generations of robot arms, each delivering improvements over the last. Some of the biggest advances have been in the reductions in robot cycle times; if we compare a robot model from 1998 to a modern-day equivalent, the contemporary version is six times faster. In contrast, in the same period, the speeds achievable by the fastest road cars have increased just 1.4 times, according to Auto Express.

It’s not just the baseline speed of the arm that has improved; modern arms will also accelerate faster, and they have more sophisticated control that gives them a smother motion. Both of these drive dramatic improvements in the cycle time of the application they are used in.

The number of models of robot that Mitsubishi Electric offers has also increased. Originally there were fewer than 10 to choose from; currently there are over 160 different variations with special modules and features tailored to the requirements of different industries. These include special coatings for the food and beverage sector, or special seals for clean room applications.

There have been significant developments in approaches to safety as well. Originally industrial robots operated behind fixed guards; today robots are designed with safety interfaces that allow them to operate without any fixed guarding, working even in close collaboration with people to bring new levels of flexibility to modern manufacturing processes. 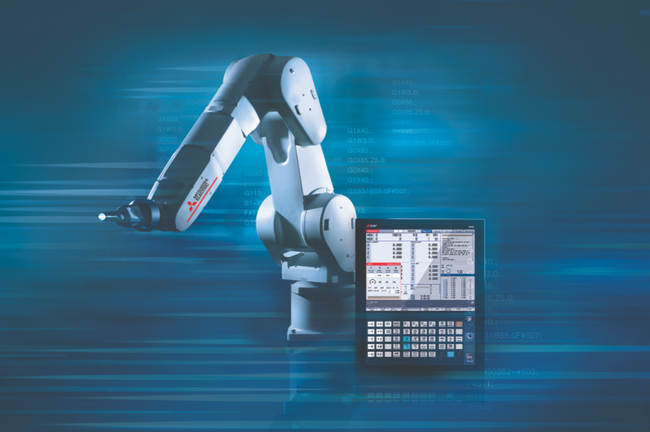 Just as developments in computerisation brought increasingly sophisticated CNC machines, so advances in control systems have changed how robots can be used. Early robot designs relied on just digital signals to interface the robot with the rest of the machine’s control system. Now the robot and the machine’s Programmable Logic Controller (PLC) can be integrated onto the same platform, increasing the amount of data that can be transferred and the speed of the data transfer itself.

This availability of data has opened up new possibilities for improving productivity and getting the maximum return from the assets. Information on total run time and the performance of individual components within the robot can be used to provide predictive maintenance information, eliminating unnecessary machine stoppages and reducing unscheduled downtime. Data could also be passed up into the cloud where robots from different sites can be either managed or compared to see how they are performing.

Associated technologies have also evolved and progressed. It is now commonplace to have sensors on the end of the robot arms that can detect the force that is being applied, driving up quality. As an example, if the robot is inserting one part into another, then the force feedback to the control system can form a key part of the quality assurance process.

Vision sensors have also become commonplace in robot systems, enabling guidance of the robot to the required position. Importantly, their integration is now simple and practically seamless.

Perhaps the most important developments of all have come in the software used to program robots. These software tools vastly simplify the process of programming even the most complex of tasks while also allowing systems to be fully simulated before any hardware has been purchased, giving both engineering designers and their customers the peace of mind that a system will perform as planned.

Advances in software are at the heart of the most recent innovation: self-guided robots that use sensors to scan their environment and plan their motion path to avoid obstacles – all in real time. This means a further increase in the safety of robot installations, even where multiple robots and people are all working in the same space, enabling robots to operate without guarding.

Bringing robotics and CNC together

Recent years have seen CNC machine designers begin to embrace robotics, in particular for machine tending where robot loading and unloading of the machining centre can significantly increase overall throughput. This reduces the cycle time, but it also frees up human labour for more complex tasks, driving greater efficiencies and opening up new opportunities. For example, while machinists reconfigure the process for each new batch in short-run jobs, larger batch jobs can be configured to run overnight without requiring any changes.

For machine designers looking to integrate robotics into the CNC machining centre, and indeed for the customer’s operators who will need to work with the machine, there has traditionally been a stumbling block. The language used to program modern robotics is still very different to the G-Code programming language common on CNC machines.

For a skilled machine programmer or machinist, G-Codes enable a machining centre to be set-up relatively quickly. But this advantage is lost if they also have to learn a second language to program the robot, where the programming language is typically script-based. Now, though, Mitsubishi Electric has brought these two previously disparate fields of automation together with the new Direct Robot Control for its MELFA range of robots.

With this Direct Robot Control, rather than programming the robot and CNC separately, the robot can be programmed using G-Codes in the CNC machining centre itself. The robot is seen as another part of the machining job. Built into the MELDAS CNC controller – as used by a number of the largest CNC machine manufacturers – are a set of G-Codes that program and teach the robot. The robot can even be moved with the machine’s handwheel. All the alarms and warnings from robot and CNC are also recorded in the same log file.

This innovation opens up a whole realm of new possibilities in CNC machining, freeing companies from the need to find either two sets of specialist programmers or one who is adept in working with two different languages. It makes it easier for OEMs to integrate robotics into their CNC machine designs and provides a genuine competitive advantage for both them and their customers.

The last 50 years have seen massive changes and a rapid evolution in the fields of both robotics and CNC machining. The present has brought these two technologies together as never before, and doubtless there is more to come. A look at the benefits that tightly integrated robots have brought to other fields can yield some clues as to what the future might hold in the CNC world. Certainly, we can expect to see improved asset availability and perhaps the ability to bringing greater levels of automation even to high-mix, low-volume CNC machining. With technologies such as artificial intelligence also filtering through into mainstream automation components, we can expect machine learning in the robotised machining centre to also drive new efficiencies.

Perhaps we can’t confidently predict how machining processes will look in another 50 years’ time, but we can certainly anticipate that automation generally and the robotisation of CNC machines in particular – will play an increasingly important role.

With 100 years of experience in providing reliable, high-quality products, Mitsubishi Electric Corporation (TOKYO: 6503) is a recognized world leader in the manufacture, marketing and sales of electrical and electronic equipment used in information processing and communications, space development and satellite communications, consumer electronics, industrial technology, energy, transportation and building equipment. Embracing the spirit of its corporate statement, Changes for the Better, and its environmental statement, Eco Changes, Mitsubishi Electric endeavors to be a global, leading green company, enriching society with technology. The company recorded consolidated group sales of 37.8 billion dollars* in the fiscal year that ended on March 31, 2021.

The role of Industrial Automation – UK Branch is to manage sales, service and support across its network of local branches and distributors throughout the United Kingdom.