ArcelorMittal and the Government of Canada announce investment of CAD$1.765 billion in decarbonisation technologies in Canada

ArcelorMittal (the ‘Company’) has just announced with the Government of Canada its intention for a CAD$1.765 billion investment in decarbonization technologies at ArcelorMittal Dofasco’s plant in Hamilton. The intended investments will reduce annual CO2 emissions at ArcelorMittal’s Hamilton, Ontario operations by approximately 3 million tonnes, which represents approximately 60% of emissions, within the next seven years. This means the Hamilton plant will transition away from the blast furnace-basic oxygen furnace steelmaking production route to the Direct Reduced Iron (DRI) – Electric Arc Furnace (EAF) production route, which carries a significantly lower carbon footprint.

ArcelorMittal will introduce new manufacturing processes that contribute to a considerable reduction of CO2 emissions and deliver other positive environmental impacts including the elimination of emissions and flaring from coke making and ironmaking operations. 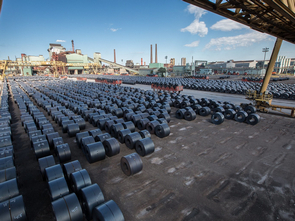 At the heart of the plan is a 2 million tonne capacity DRI facility and an EAF facility capable of producing 2.4 million tonnes of high-quality steel through its existing secondary metallurgy and secondary casting facilities. Modification of the existing EAF facility and continuous casters will also be undertaken to align productivity, quality and energy capabilities between all assets in the new footprint.

The new DRI and EAF will be in production before the end of 2028.

This project contributes to the sustainability of well-paying skilled positions in advanced manufacturing and is also expected to support as many as 2,500 jobs during the engineering and construction phases. It will also support ArcelorMittal Dofasco’s customers decarbonization ambitions while further enhancing ArcelorMittal Dofasco’s capability to support the most demanding product segments including automotive exposed, advanced high strength steels, and consumer packing.

This new production route for ArcelorMittal Dofasco will provide a technically advanced manufacturing environment for operations, maintenance, and technology staff to work in, with improved health and safety. New positions, training, and development will be provided for employees moving from existing business units to new assets, with approximately 160,000 training hours required to transition our workforce to the new footprint.

“Our government has been steadfast in defending and championing our steel workers. Today’s announcement, through the Net Zero Accelerator, is about investing in the low-carbon transformation of Canadian industry, taking serious action in the global fight against climate change, and supporting good middle-class jobs in Hamilton. We will continue to be there to support growth and a strong economic future for our steel workers and the broader Hamilton community.”

“We are supporting our steel workers and companies like ArcelorMittal Dofasco as they seize today’s opportunities in the low-carbon economy and they do their part in the fight against climate change. This investment will ensure that Canada’s largest producer of flat-rolled steel adopts innovative technologies, continues to provide economic opportunities for Canadian workers, and contributes meaningfully toward our climate targets. This investment will create good jobs in communities like Hamilton and clean Canadian-made products for the world for decades to come.”

“This $400 million investment by our government in reducing greenhouse gas emissions at ArcelorMittal Dofasco will transform Hamilton. It will position ArcelorMittal Dofasco to become a world leader in the development of advanced steels and make a significant contribution to achieving Canada’s carbon pollution reduction targets. We are proud to work with organizations like ArcelorMittal Dofasco that are committed to building a stronger, more competitive economy by innovating to fight climate change and creating 2,500 new jobs.”

“The plans we have announced today represent a historic moment for ArcelorMittal in Canada and North America, marking the beginning of a new era of steelmaking in Hamilton, that will result in a 60% drop in CO2 emissions within the next seven years. We are very pleased to be in partnership with the Government of Canada - as partners, we all recognize that it is vital to accelerate our carbon emissions reduction and strengthen our climate action. Indeed progress in the next decade is vital if the world is to reach net zero by 2050.

“This project is part of ArcelorMittal’s new global 25% CO2 2030 emissions reduction target which was announced yesterday in our second climate action report. DRI-EAF technology, such as that being introduced in Dofasco, is at the heart of our new target although we do also continue to develop our smart carbon technology route. Transitioning from the blast furnace route to the DRI-route, offers an immediate significant reduction in emissions in the first phase through natural gas and then in a second phase, which we call innovative DRI, harnessing green hydrogen or other Smart Carbon technologies.

“This is the first significant decarbonization project we have announced outside Europe and again reflects ArcelorMittal’s determination to lead the decarbonization of the steel industry. Across the company our people are highly motivated to demonstrate that steel can reach net zero and will be the core material for a carbon-neutral world. This project in Dofasco is a very significant and important milestone in this journey.”

“The Government of Canada’s investment accelerates the realization of low carbon steelmaking in Canada. This significant total investment in Hamilton will transform our organization and deliver exceptional benefits to all our stakeholders including our customers, our employees and the community.

“The new steelmaking footprint will improve our capability to support the most demanding product segments with advanced high strength steels, including those used for the emerging electric vehicles in the automotive sector. The new steelmaking stream also sustains well-paying skilled positions in advanced manufacturing in Ontario, with the opportunity for our highly skilled employees to work in the most technically advanced Steelmaking assets in North America. The company’s bayfront property has been re-imagined and we are well on the way to a significant and broad reduction in environmental impacts, contributing to the health and sustainability of our community, the environment and the economy.”

ArcelorMittal has an ambition to be net zero by 2050. Yesterday the Company published its second group Climate Action Report in which it set a new 2030 global carbon emissions intensity reduction target of 25%. It has also increased its European 2030 carbon emissions intensity target to 35%, from 30%. ArcelorMittal estimates the cost of achieving its global 2030 carbon reduction target is c. US$10 billion and believes government funding support of approximately 50% is required to enable the Company to remain competitive regionally and globally through the transition period given the capital investment required and higher operating costs of low-carbon steelmaking technologies. The Company has developed two technology pathways, Smart Carbon and Innovative DRI, both of which it believes will have an important role to play in helping the Company achieve net zero by 2050.