The Middle East is expected to register the highest refinery condensate splitter capacity additions globally between 2021 and 2025, contributing more than half of the total capacity additions by 2025, says GlobalData, a leading data and analytics company.

Teja Pappoppula, Oil and Gas Analyst at GlobalData, comments: “Iran is the sole contributor to the Middle East’s condensate splitter unit capacity additions as it continues to process gas condensate produced from the giant South Pars field. Among the new build refinery projects in the country, the planned Siraf refinery in Iran is likely to add a capacity of 360 mbd in 2025. The refinery will process gas condensate mainly to produce gasoline and petrochemical feedstock.” 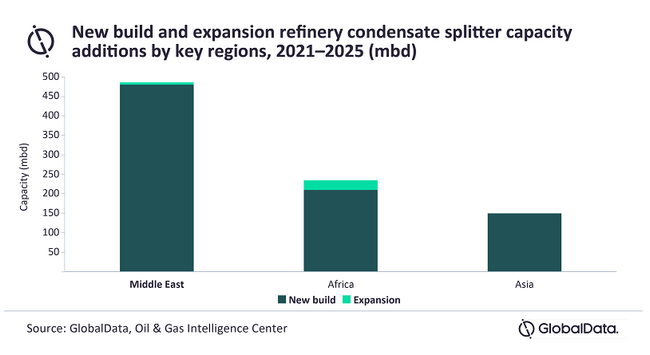 GlobalData identifies Africa as the second highest contributor, accounting for around 27% of the total additions by 2025. Forcados and Ohaji are two refineries in Nigeria that are contributing 100 mbd of capacity each in the region and both are expected to become operational in 2023.

Asia ranks third globally, contributing around 7% of global condensate splitter unit capacity additions during the outlook period. Malaysia accounts for total capacity additions in the region, with 150 mbd of capacity expected to be added by 2025 from the new build Pengerang II project.

Announced/Planned: Denotes only new build assets that are in different stages of development and have not started commercial operations.

This report was built using data and information sourced from proprietary databases, primary and secondary research, and in-house analysis conducted by GlobalData’s team of industry experts.

More in this category: « Global oil and gas contracts activity in Q2 2021 declined by 7%, says GlobalData Oil price trajectory: Tug of war between supply constraints and weak demand outlook »
back to top