Macclesfield-based Tidy Planet has shipped four of its A900 Rocket Composters and a bespoke Dehydra Dewatering system to an oilfield in Kazakhstan, to compost the site’s 255 annual tonnes of food waste.

Situated in Western Kazakhstan in the Burlin region, the remote 50km² facility is a major producer of oil and gas and has 4,000 employees working on the premises at any one time.

Its workers’ camps and canteens generate a quarter of a kilotonne of food waste every year, from staff plate scrapings, and prior to investing in an on-site composting solution, this material was sent for a combination of incineration and landfill – in the absence of any commercial food waste processing sites that could accept the waste.

The new equipment – procured and operated by Demtec Solutions – will, for the first time, enable the oilfield to convert its wastage into compost, reducing the greenhouse gas emissions associated with incineration and pushing the organic waste stream further up the Waste Hierarchy.

Commenting on the new project, Tidy Planet’s sales manager, Huw Crampton, said: “There’s hardly any infrastructure yet available to process food waste in Kazakhstan, so when the law recently changed around how it could be dealt with, this prompted our client to invest in a process that treated it as close to its source as possible.” 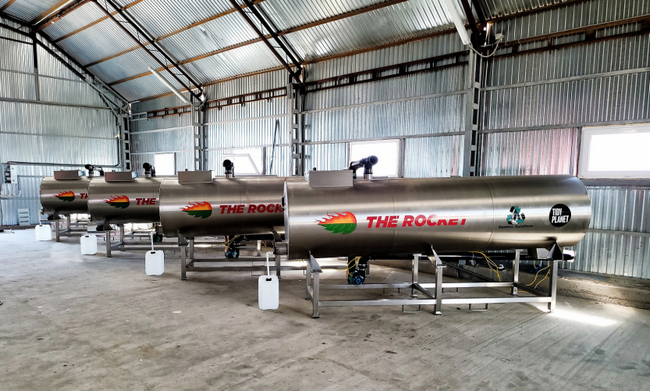 In January this year, Kazakhstan brought in a new law which prohibits the burying of food waste – to help combat the country’s five million tonnes of solid waste being landfilled every year.

Huw continued: “Demtec is a waste management contractor to the oilfield, so when the law changed, the team built a new composting facility a stone’s throw away from where the waste is produced. As a result, this avoids excessive transportation – reducing the firm’s carbon emissions and eliminating off-site disposal costs.

“The nutrient-rich compost will also enable the site to sequester 70 tonnes of physical carbon into the surrounding soils each year – removing the CO2 from our atmosphere. It’s a better solution than any off-site process could ever have offered.”

Bakhitzhan Setzhanov, director at Demtec Solutions, also added: “With the new laws surrounding what we can do with food waste, we wanted to find an environmentally friendly solution that we could also use on other projects.

“We saw that the Rockets were already being used on other oilfields, so it made sense to look at learning more about the equipment. We’ve never made compost before, but when we realised that we could do it on site – treating our wastage at source – it was something we definitely wanted to pursue.

Bakhitzhan continued: “We’ve done some research into composting and know that the quality of the output is important. So, we asked Tidy Planet to build our dewatering unit into a special inspection bench – where our team will handpick all the non-compostable items from the food waste before it’s fed to the composters. This way we know that the product we make is clean and good for the soil.”

Huw concluded: “With temperatures ranging from -40°C in winter to +40°C in the summer months, this might be one of the world’s most extreme working environments – proving if you can compost here, you can do it anywhere.”

The equipment was shipped in late June and is now being installed at the Kazakhstan oilfield site.