The life of a crane

In 1992 the ambitious Van Seumeren company purchased four Demag CC4800 cranes. This was a bold move because the 800t CC4800 was one of the world’s biggest models of crane at that time, and the business had not yet undergone the merger that transformed it into the global leader we know today.

But the purchase proved to be a wise one, and the four cranes went on to play a crucial role in the economic development of countries and industries around the world for the next three decades – supporting the rapid, successful growth of Mammoet in the process. We follow one of these cranes to explore some of its more remarkable lifts and how it is still proving invaluable for its new owners today.

“The purchase of the CC4800 was a brave move for the business, as at the time we still mainly worked in the Netherlands and nearby European countries. In those days a crane with 800t capacity was not as common as it is today; it was a special piece of equipment.

Fortunately, we recognized that there was growing demand for bigger lifts to keep the crane busy, particularly in developing nations where the energy industry was expanding. In hindsight, the CC4800 really helped to announce the company on a global scale.”

This meant that the CC4800 was soon working across the globe, primarily on a range of major oil and gas projects. A key appeal was that the crane required relatively little space in which to operate, could be relocated on its tracks and drive with its load.

Amongst its early projects was Exxon’s Srirarcha Expansion Project in Thailand, where it lifted a range of large modules from a single position – helping to minimize the project’s construction time. In the early 1990s it was used alongside another CC4800 to perform the tandem lift of an 800t reactor in Venezuela; at the time a record for South America.

Wherever the crane travelled, so did its specialist crew:

“Because the capacity of the CC4800 was so rare, there was demand for it all over the world. Today, there are cranes with the same capacity in many more countries in order to avoid the time and expense of shipping such a big piece of equipment. That was simply not the case in the 1990s.

This meant that crews travelled across the world with the CC4800, from Canada and South America to the Middle East and throughout Asia. As well as seeing different countries, it was extremely satisfying work - performing big lifts that helped to make large-scale projects like refinery expansions and steel mill builds more efficient.” 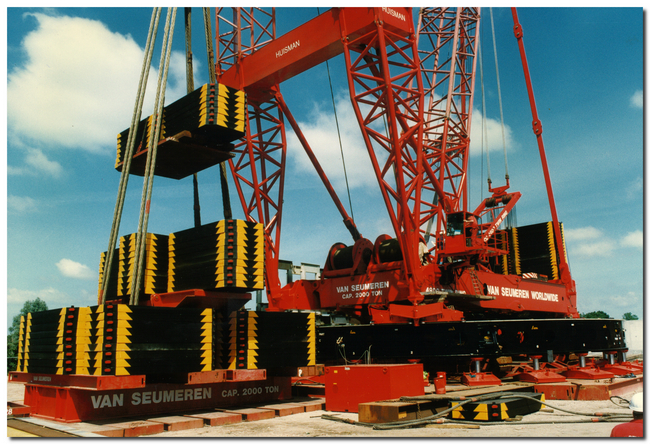 Pushing through the 1,000t barrier

As lifting bigger leads to more efficient project schedules, demand for the crane grew. So much so, that by the mid-1990s even greater capacity was needed to accommodate the emerging trend for modularization.

This led Mammoet to look beyond the crawler crane format, into how the CC4800 could be upgraded for use as a ring crane with a capacity of over 1,440t – unlocking a new level of work for the business, and more efficient methodologies for the client.

Although modularized construction is now widespread in the oil and gas industry, this was not always the case. Cranes such as the newly upgraded CC4800 Twin Ring provided the critical lifting capacity to support this new methodology, and the efficiency gains it could support.

Furthermore, the crane could be used in both crawler and ring configuration on a project to provide greater lifting options without the need for two cranes on site. So, the new crane could lift ultra-heavy loads in ring configuration, but still travel around site while lifting smaller loads, thanks to its crawlers.

This was the case during work for Foster Wheeler at Exxon’s Rotterdam facility. This project involved the lifting of seven items, including two columns weighing 606t and 759t, in Twin Ring configuration, and then further smaller lifts in its standard crawler crane format.

Project Managers that worked with the crane remember the advantages of working with this now traditional piece of equipment:

“We used to joke that all you really needed to make running repairs and fixes to the CC4800 was a screwdriver and a hammer! This was a huge help when we were working out in remote locations such as Venezuela or Trinidad, where we would need to wait days if an engineer had to be flown in. Instead we were able to deal with many problems ourselves, keeping the project on track.”

“Although the CC4800 was not easy to move – its crawlers weighed upwards of 90t each – it was a strong and reliable crane. It was dependable when we needed it to be, in part because so much of the assembly was done by hand – we would knock the boom pins in with sledgehammers, which isn’t something you see nowadays!”

Whilst the majority of the CC4800’s work has been in the oil and gas sector, it has had an interesting working life beyond that industry. Dirk Knoester continues:

“The CC4800 has been involved with a wide variety of different projects. This has included helping to move a steel mill from Germany to India, and a number of high-profile stadium builds. In 2006 it proved critical in building China’s centerpiece Beijing National Stadium, the ‘Bird’s Nest’, for the 2008 Olympic Games.”

Shortly after this project, following over 20 years of service with Mammoet, the CC4800 found a new home with Shepherd Offshore in the UK. Here it is located on the quayside of Shepherd’s Newcastle upon Tyne facility where it undertakes ship-to-shore lifts and can use its crawler capabilities to move across the quay as required.

“One of Shepherd Offshore’s main objectives is responsible and sustainable regeneration; we bring value to a site or location and then in turn the wider community benefits. The CC4800 has helped increase the level of services that we can offer clients which results in more business for the local region.

During this time, it has handled a wide variety of loading and discharging projects and has successfully handled over 50,000 combined tonnes to and from vessels. It follows that our CC4800 crane has been an invaluable cog in the Shepherd Offshore machine and a lynchpin of our Neptune Energy Park operations.

The CC4800 operations have been so successful that we have recently constructed even more quay space, to allow increased movements. Further, we have recently transformed our dry dock into a maritime test tank. Here, the CC4800 is crucial in providing heavy and movable lifts.

Shepherd Offshore is working with several partners at Neptune Energy Park, where our expertise allows us to deliver the best and most cost-effective possible solutions. The CC4800 fits this objective, adding to our proven track record and capabilities. We envision continuing to work with Mammoet and further developing this harmonious relationship.”

The durability of the CC4800 has again proven to be a benefit, as more recently Mammoet was able to supply Shepherd with parts to make essential repairs to the crane and keep it running. Julian Alkemade of Mammoet Used Equipment, comments:

“We were delighted to help find the CC4800 a new home when it had reached the end of its working life here at Mammoet. Equipment maintenance is key to how we operate, which means we can be confident that assets meet the most demanding requirements and standards.

As a global business with an extensive equipment inventory, we frequently have high quality assets available for purchase - such as cranes, prime movers and SPMTs. The Mammoet Used Equipment platform creates value for our customers, offering equipment that is reliably well-maintained according to the manufacturer’s instructions.

This equipment is available throughout the world, at a price that is affordable to most local crane and heavy lift suppliers. Even when cranes have been in service with Mammoet for decades – like this CC4800 – our customers can rely on the quality of the equipment they receive”.

Mammoet
Mammoet helps clients with Smarter, Safer and Stronger solutions to any heavy lifting or transport challenge. We aim to develop long term relationships in order to understand their businesses and challenges best, so we can realize the most efficient and cost-effective approaches. We have a unique global network and an unparalleled fleet of equipment. Through deep and longstanding engineering expertise and the highest quality and safety standards in execution we bring an intelligent and flexible approach to projects across a wide breadth of industry sectors. Clients trust us to help them achieve feats that were once considered impossible, and we have often broken records in doing so.

More in this category: « Eurotransit orders Konecranes RMGs for new intermodal terminal in Kazakhstan Outokumpu signs a new deal on three cargo vessels with Langh Ship to reduce CO2 emissions in transports »
back to top