The UK could see the construction of hundreds of new purpose-built underground hydrogen stores to help fuel the green economy of the future.

Underground energy storage specialists Gravitricity have signed a memorandum of understanding (MoU) with infrastructure major VSL Systems UK to complete the design of the purpose-built underground lined rock shafts which could be rolled out nationwide. They plan to build a scale demonstrator in the next 24 months ahead of commercial rollout.

VSL is part of the French Bouygues Construction group and is a specialist contractor for the construction, preservation and repair of major engineered structures and infrastructure. Gravitricity is an Edinburgh based energy storage company which is developing below ground gravity energy storage systems in the UK and mainland Europe.

Gravitricity believes their storage technology – known as FlexiStore – is a ‘goldilocks’ solution to the future challenge of green hydrogen storage – offering a system that is larger and more secure than above ground hydrogen storage, and more flexible than subterranean salt caverns, the two most commonly-proposed alternatives.

Each rock shaft would be six metres in diameter and 365 metres deep and lined with steel. A single store would hold up to 100 tonnes of green hydrogen – sufficient to refuel more than 1000 HGVS, or to power 500 buses for a week. 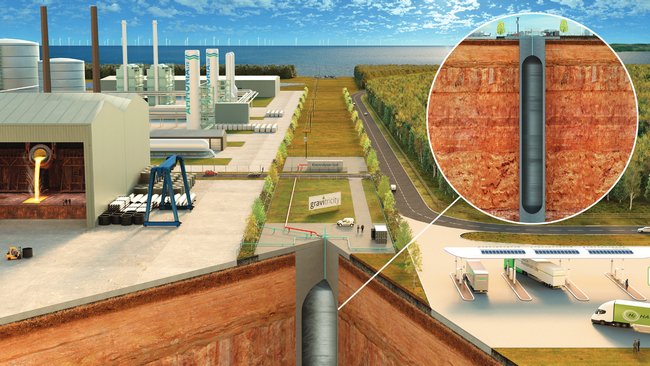 Gravitricity calculates that construction of just 1000 FlexiStores would meet a quarter of the UK Government’s predicted 2050 hydrogen storage needs[i].

Crucially, the stores can be constructed wherever required and are not dependent upon specific geological locations (a drawback of salt caverns). This means single or multiple FlexiStores can be built close to renewable-powered green hydrogen production facilities where they can fuel hydrogen-powered industrial hubs and commercial hydrogen filling stations.

A single FlexiStore would store the green hydrogen generated by a 460 MW offshore wind farm and could be emptied and refilled daily, whilst multiple stores could soak up vast amounts of otherwise wasted or ‘constrained’ wind – which amounted to 3.6TWh in 2020[ii].

The Edinburgh firm is now seeking funds along with VSL to build their first scale demonstrator project in the UK. Once complete Gravitricity then plans the rollout of hundreds of purpose-built green hydrogen FlexiStores nationwide. The company is also in advanced discussions with Cumbrian steel specialists Bendalls Engineering to fabricate the linings for the rock shafts.

[i] National Grid’s ‘Future Energy Scenarios 2021’ suggest that between 12TWh and 51TWh of hydrogen storage will be required in 2050 across varying net zero compliant scenarios. UK Hydrogen Strategy, August 2021: https://assets.publishing.service.gov.uk/government/uploads/system/uploads/attachment_data/file/1011283/UK-Hydrogen-Strategy_web.pdf

“Green hydrogen will be a vital fuel of the future in industrial applications and in heavy transport, where electrification is just not feasible, or where industrial grey hydrogen is already used,” says Charlie Blair, Managing Director of Gravitricity.

“Purpose-built lined rock shafts will be the safest and most affordable way to store large volumes of hydrogen near to where it will be required. It is difficult to transport hydrogen. It therefore makes sense to locate hydrogen storage systems close to sources of renewable power – which can generate green hydrogen – and to potential users.

“At present, the main proposals for storage are underground salt caverns and above ground storage. Salt caverns offer scale, but very little flexibility – they only exist in certain locations; whilst above ground systems lack scale.

“We believe we have a ‘Goldilocks’ solution which can be delivered safely and affordably to meet the growing hydrogen economy’s needs,” Blair says.

“VSL is delighted to partner with Gravitricity to develop and deliver these pioneering ground engineering solutions for renewable energy generation and storage. This project is fully aligned with the VSL vision to focus our engineering capabilities and solutions on the global transition to a low carbon future.”

The UK Government has highlighted a number of electrolytic hydrogen projects across the UK which will require hydrogen storage alongside renewable powered electrolysers[iii].

Gravitricity recently completed a £300,000 feasibility study, conducted with ARUP and funded by the UK Government’s BEIS HySupply programme, which showed it is technically and commercially feasible to store large amounts of compressed hydrogen in an underground lined rock shaft.

“If green hydrogen is to become a mass market fuel of the future then we need to find ways to store it safely and in large quantities close to where it is needed,” Blair says.

At Gravitricity we are developing long-life, below-ground technologies which store energy safely and deliver it on demand at a lower lifetime cost than current alternatives.

Our gravity and hydrogen storage technologies each offer unique attributes, ideally suited to the fast-evolving energy markets of tomorrow.

As a specialist in post-tensioned and cable-stayed structures, foundations and ground engineering, VSL contributes to the design and construction of transport infrastructure (bridges, tunnels, roads), buildings, and industrial & energy-producing structures, and it maintains, repairs and upgrades all structural systems that guarantee performance, safety and durability.

VSL is part of Bouygues Construction group. It has 3,800 employees in 25 countries, mainly located in Asia, Oceania, the Middle East, Europe, Canada and Latin America.