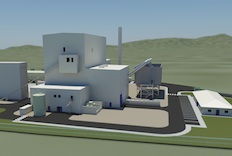 A newly formed Danish JV is to invest £160 million to establish the Brigg Renewable Energy Plant – a 40MW biomass power plant in Lincolnshire, which will be primarily fuelled using locally sourced straw.

Due for start-up in early 2016, the plant will be the first project to be delivered by BWSC PLC – the venture formed specifically to build, own and operate power plants by PensionDanmark and BWSC, which is putting up £32 million of the investment.

BWSC has a 15-year agreement to operate and maintain the Brigg power plant, which will employ boiler technology from Danish company BWE to provide steam for the turbine generator.

The Lincolnshire plant was developed by Eco2, a UK renewable energy company that is currently collaborating with BWSC on a woodchip-powered plant in Wales and a straw-powered plant being built in Sleaford, Lincolnshire.

The new investment was agreed between all parties on 8 Aug following on from what BWSC said was a much awaited announcement by the UK government regarding biomass funding.

"With this model, not only will we be market leaders in power plant technology, but we will also own, operate and finance new plants in collaboration with PensionDanmark," he added. "This boosts our competitiveness considerably and establishes Danish energy technology on the world map.”

According to PensionDenmark, the JV provided a blueprint to generate attractive returns, with limited risk as most of the investment was in the form of loans and the bulk of earnings are regulated. Costs, it added, would be fixed via long-term contracts.
The Lincolnshire project announcement came just days after a £55-million order for BWSC to build a 15.8 MW biomass CHP plant in Derry/Londonderry, Northern Ireland. The contract with Evermore Renewable Energy (ERE) also includes a 15-year operation and maintenance agreement worth a further £39 million for the Danish power plant company.

The Irish biomass plant will be fuelled by recycled wood and is expected to be handed over to ERE for start-up of commercial operation during summer 2015.

Identifying the right kind of fuel and amendments in the UK legal framework conditions for renewable energy were among the challenges faced during four years of effort to secure finance for the NI project.

BWSC said it and ERE had been in contact with several potential investors, before obtaining financial approval for the project. Denmark's EKF (Export Credit Agency), it noted, played a decisive role in helping to ensure risk cover and funding.

Funding for the Evermore plant was eventually provided by the UK Waste Resources & Energy Fund (UKWREI) – a fund managed by the Foresight Group and in which the UK Green Investment Bank plc is a cornerstone investor – and Investec Bank plc.
”Developing and constructing energy projects is a very complex process which involves local authorities, government agencies and many specialists from different professions," said Jensen of BWSC

"Technical skills, high levels of cooperation and trust and, not least, a lot of patience are crucial factors for our business to achieve a successful project implementation,” the CEO concluded.