The need to increase resilience and optimise resource management in light of COVID-19 will be among the key drivers for the growth of Digital Twins over the next five years, according to ABI Research. The global tech market advisory firm expects the number of urban Digital Twins to exceed 500 by 2025, and that implementation will expand beyond limited pilots to widespread multi-purpose deployments.

The latest quarterly report from ABI Research entitled Smart Cities and Smart Spaces positions Cityzenith alongside Bentley Systems and Microsoft as businesses best placed to capitalise in this expanding market. 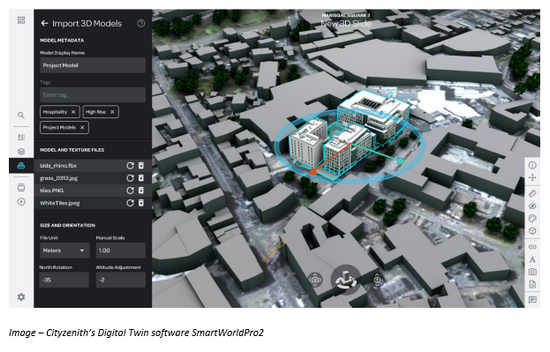 He noted that since the first Digital Twins were deployed in cities such as Singapore around three years ago, features have quickly expanded to enable a much wider range of application areas including infrastructure coverage planning and green infrastructure management. Boston is one city to have already employed the use of Digital Twins, alongside Helsinki, Jaipur and Dublin.

“The Digital Twin ecosystem system activity is growing quickly with more suppliers announcing more deployments in more cities,” said Bonte. “Vendors like Dassault Systèmes and others are paving the way for extending urban Digital Twins to marketplaces and opening access to key metrics and dashboards to the citizens themselves, increasing their overall involvement and helping gain approval of city government decisions and policies.”

In order to help cities achieve carbon neutrality, Cityzenith  announced in October 2020 that it will donate its Digital Twin software to up to 10 cities over the next year as part of their Clean Cities - Clean Future campaign. Additionally, Bentley Systems partnered with Microsoft to integrate Azure IoT Digital Twins and Azure Maps into its iTwins platform.

Michael Jansen, CEO and founder of Chicago based Cityzenith , said “We at Cityzenith welcome this news and are delighted to be a part of the growing Digital Twin industry. We believe our Clean Cities - Clean Future campaign can be a key component of this global effort towards cleaner cities and a safer environment.”

About Cityzenith
Cityzenith is based in Chicago with offices in London and New Delhi. The company's SmartWorldPro2™ Digital Twin platform was created for anyone designing, constructing, and managing complex, large-scale building projects, properties, and real estate portfolios. Find out more on www.cityzenith.com

Atlas Copco has extended its portfolio of GHS VSD+ vacuum pumps with the launch of a new model offering power...

Powerful electrical assemblies or components usually generate power losses, converted into heat. Depending on the ambient temperature, operating location and...

Frost & Sullivan has awarded SPX FLOW Inc. with the 2016 Global Industrial Mixer Solutions for Process Company of the...

The Ministry of Transportation of Azerbaijan with its new department “Baku Bus” has ordered 300 Iveco buses fitted with DIWA...

Supporting Function Development in Centralized Architectures with Enhanced Connectivity In the development of self-driving and electrically- powered cars, the connectivity requirements...

A decade of excellence and innovation

Sulzer celebrates 10th anniversary in Allschwil Sulzer Chemtech’s center of excellence in Allschwil, Basel-Landschaft, Switzerland, was established in 2009 following the...

Viking Analytics, a Swedish provider of advanced analytics solution for predictive operations, and iioote, an IoT solution provider and LoRA...

The Purdue Integrated Process Education System (PIPES) laboratory was fully designed and implemented through collaboration of industry professionals, faculty and...

Liquiphant FTL31 and FTL33 liquid level switches are based on tuning fork technologies to handle difficult process conditions that defeat...

The speed and efficiency of industrial control and machinery automation projects is enhanced significantly with a major new release of...