In a data-driven world, turning data into actions is the best way to boost efficiency. As businesses become more global and complex, operational data must travel across greater distances, at faster speeds and in larger quantities. Here, Jürgen Resch, industry manager at COPA-DATA, examines why manufacturers should move their information systems from serial communication to TCP/IP.

Generally, serial communication is a widely used method to transfer data between processing equipment and peripherals. Every device, might it be your computer or mobile, runs on serial protocol which serves as a reliable form of communication.

In fact, it was not until the 1990’s that fibre optics were implemented to guarantee immunity against electromagnetic interferences, which not only prevented interruptions but helped save tons of copper that were laid in cable conduits.

So, when ethernet became cheaper and new network topologies — the arrangement in which computer systems or network devices are connected to each other — were made possible, such as the Transmission Control Protocol/Internet Protocol (TCP/IP). 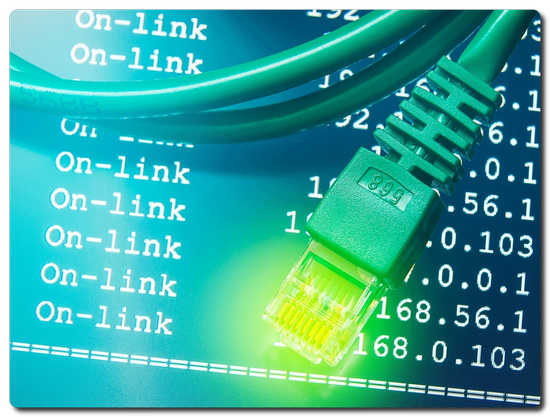 COP471 - Secure in the knowledge – BP.jpg: Industrial software can be vital in preventing the rising number of Distributed Denial of Service (DDoS) attacks against businesses.

TCP/IP is responsible for managing the connection between a client and a server, making sure the data that needs to be transferred is split into several packets, which will eventually reach their destination. Unlike serial communication, if data corrupts or does not reach its destination TCP/IP defines how the missing data will be retransmitted, while controlling the flow of data to the right place.

TCP/IP technologies have received much stronger development efforts than serial, due to the vast number of users currently utilising it. For example, TCP/IP is used for the internet, which obviously demands fast communication speeds and flexibility in topologies.

TCP/IP is also widely used in industrial settings, unless the facility has opted for fast Ethernet protocols. In these environments, TCP/IP can help support network protocols within substations and manufacturing plants, such as DNP3 and IEC 60870-5-104. These protocols are commonly used for wide area communication between the substation and the supervisory control and data acquisition (SCADA) master.

With this in mind, TCP/IP is essential for the plethora of new current remote working situations the industry finds itself in. This is due to its ability to control locations separated between long distances. That being said, TCP/IP is not without its downfalls.

Because they are so widely used, TCP/IP protocols can be vulnerable to attack. Today, hacking tools for TCP/IP related protocols are easier to find than serial protocols, so it is essential to ensure systems are secure.

Consider the consequences of this risk for an energy network, for example. While TCP/IP provides data communication for distributed assets, such as multiple substations and energy generation sites, this widespread infrastructure is at serious threat of cyber-attack. In fact, since the infamous discovery of Stuxnet in 2010, there has been an increase in attacks on the energy sector, with attacks rising by 380 per cent between 2014 and 2015.

When using TCP/IP protocols, the energy sector must be extra vigilant. When choosing technology, the energy industry involve options like Virtual Private Networks, coupled with standards like the IEC 62351 series, that provide the required levels of security. COPA-DATA’s energy grid software, zenon, for instance, meets the IEC 62351 standard for security in energy management systems and is developed using a security by design approach.

There are, of course, some instances where serial communication is used for security. In the power industry, this is only present in rare cases where a dedicated communication link is used serially for security reasons. This provides more protection against hackers, but security by obscurity is not a viable way to protect critical infrastructure. Instead, opting for secure TCP/IP is recommended.

TCP/IP ensures data can travel across greater distances, at faster speeds and in larger quantities. And, although TCP/IP might be at some risk to attack, by combining this with secure communication technology, like COPA-DATA’s zenon, we can protect data and in turn, the grid.

COPA-DATA is the manufacturer of the zenon® software platform, used in the manufacturing and energy industries for the automated control, monitoring, and optimization of machines, equipment, and power supplies. Founded by Thomas Punzenberger in 1987 and headquartered in Salzburg, Austria, the independent, family-owned company employs approximately 285 workers around the globe. The distribution of software on an international scale is made possible through the company’s eleven subsidiaries and numerous distributors. In addition, more than 270 certified partner companies ensure efficient software implementation for end users in the food & beverage, energy & infrastructure, automotive, and pharmaceutical industries. In 2019, COPA-DATA generated turnover of EUR 51 million.

zenon is a software platform from COPA-DATA for manufacturing and the energy industry. Machines and equipment are controlled, monitored and optimized. zenon’s particular strength is open and reliable communication in heterogeneous production facilities. Open interfaces and over 300 native drivers and communication protocols support the horizontal and vertical integration. This allows for continuous implementation of the Industrial IoT and the Smart Factory. Projects with zenon are highly scalable.
zenon is ergonomic, both for the engineer and for the end user. The engineering environment is flexible and can be used for a wide range of applications. The principle of “setting parameters instead of programming” helps engineers to configure projects quickly and without errors. Complex functions for comprehensive projects are supplied out-of-the-box to create intuitive and robust applications. Users can thereby contribute to increased flexibility and efficiency with zenon.

Fail to prepare, prepare to fail

~ Could investing in supporting software save headaches? ~ Benjamin Franklin enjoyed this old proverb: “A little neglect may breed mischief....

Which automotive drive system will become dominant in future? How can we achieve further reductions in energy consumption and emissions...

The CO2 specialist offers dry ice producers and distributors an effective solution for producing the required amount of dry ice...

The new archelios™ O&M Join the archelios™ Suite’s team at this event and be part of our exciting, new...

–Expanding the use of IIoT to help our customers run their businesses more efficiently– Yokogawa Electric Corporation announces that it will...

Virtual reality (VR) often makes the headlines as a game changer in technology, but is actually a niche brand of...

Electric motor failure can strike even with the best preventative measures in place, and it can be difficult to know...

Konecranes modernises the rotary crane at the test facility for rocket drives at the Deutsches Zentrum für Luft- und Raumfahrt...

Enterprise mobile security management is on the top of all CIO agendas worldwide as mobile working and bring-your-own-device policies grow...