"Since the launch of the world’s first driverless metro in Lille (France) in 1983, Keolis has been drawing on its expertise as a pioneer in autonomous mobility to make shared mobility smarter, more connected and more sustainable. This ground-breaking trial in collaboration with our key partners constitutes another important step forward," says Bernard Tabary, CEO International at Keolis. "We’re pleased to be conducting this trial in Sweden, where we already have a strong presence through our subsidiary Keolis Sverige and carry 730,000 passengers per day." 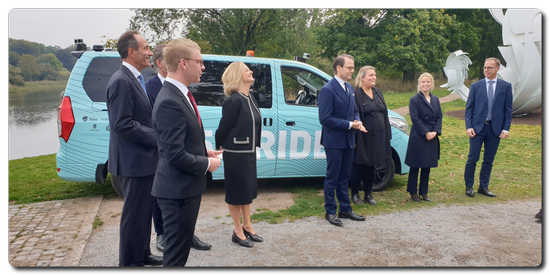 The pilot project at Djurgården explores how a system with 5G-connected vehicles, which are monitored by a control tower remotely, can facilitate the safe introduction of self-driving electric buses in more complex and demanding urban areas. Benefits of such a system include improved route planning and traffic flows, reduced operational costs and pollution and a more reliable, accessible form of public transport for passengers.

The unique technical features of the 5G network, including extremely high data speeds combined with low latency, mean that the connected buses can respond in real time to commands from the centralised control tower. This is a prerequisite for the safe remote control of vehicles and an important step in moving the driver from the bus into the control tower.

Keolis and Ericsson, which provides the technology for the connected control tower, initiated the project following demonstrations of remote control 5G vehicles in 2019 at the UITP exhibition in Stockholm and at the RNTP exhibition in Nantes.

Telia is providing 5G connectivity in collaboration with Ericsson. Intel is delivering processing power to both the IT system in the vehicles and the control tower, as well as the mobile network. The vehicle, which is equipped with self-driving technology, is provided by the Swedish technology firm T-engineering. It features seven seats and will drive at a maximum speed of 18km/h.

The trial ends on 8 October and will be continued in Kista Science City. The aim of this trail will be to pilot the vehicle from a control tower without an operator on board. In parallel with the Swedish trial, Keolis is testing fully autonomous vehicles at a site closed to traffic in Châteauroux in France.

Keolis Sverige has been present in Sweden since 2003 and today operates 1,650 fossil-free buses which cover 84 million km every year in five Swedish regions. With over 6,000 employees, it is the second-largest player in the Swedish bus market.

A pioneer in autonomous vehicles, Keolis Sverige partnered with Volvo in developing and demonstrating a 12-metre long electric which was parked, washed and recharged autonomously at the Keolis depot in Gothenburg in November 2019.

About Keolis
Keolis is a pioneer in developing public transport systems and works alongside public decision-makers who want to turn shared mobility systems into levers to enhance the appeal and vitality of their regions. A world leader in operating automated metro and tramway systems, Keolis is supported by a sustained and open innovative policy alongside all of its partners and subsidiaries –Kisio, EFFIA, Keolis Santé and Cykleo –to bolster its core business and develop new innovative and bespoke shared mobility solutions, including trains, buses and coaches, trolleybuses, shared car solutions, river and sea shuttle services, bike share services, car sharing, fully electric driverless shuttles and urban cable cars. In France, Keolis is the second largest parking company through its subsidiary EFFIA, and the country's leading medical transport solution since the creation of Keolis Santé in July 2017. The Group is 70%-owned by SNCF and 30%-owned by the Caisse de Dépôt et Placement du Québec (Quebec Deposit and Investment Fund), and employs some 68,500 people in 15 countries. In 2019, it posted revenue of €6.6 billion. In 2019, 3.4 billion passengers used one of Keolis’ shared mobility services. www.keolis.com
* Australia, Belgium, Canada, China, Denmark, France, Germany, India, the Netherlands, Norway, Qatar, Senegal, Sweden, the United Kingdom and the United States.

Transformer energy performance standards being introduced all around the world are spurring transformer manufacturers, as well as their electrical steel,...

Connector can be custom ordered with short delivery times available For the first time ever, users can now make customised adjustments...

The acquisition of Light Bureau reinforces ÅF’s offering within lighting design and provides an improved platform for taking on international...

Control with the best of both worlds

With the new DRC mini joystick hand-held transmitter, cranes can be ergonomically controlled with one hand using joysticks with a...

After the successful launch of the AUMA Support App for Apple devices earlier this year, the electric actuator manufacturer now...

GridBeyond, the leader in intelligent energy technology, have released a free online tool – the Energy Opportunity Calculator. The tool...

Industrial automation trends for 2017: Predictions for the future of manufacturing

As manufacturing facilities incorporate greater levels of automation, the demand for new technologies continues to grow. Recent years have seen...

CETA Testsysteme GmbH, as a manufacturer of leak and flow testing devices, has more than 30 years of experience in...

British manufacturing in 2019: Preparing for uncertainty

Increasing digitalisation, the growing skills shortage and the uncertainty of Brexit — British manufacturing has a lot to contend with....

For the first time ever on Sheringham Shoal offshore wind turbine farm, drones were used to inspect all 264 turbine...

~ Thermal fluid maintenance can maximise productivity and minimise downtime ~ The Oxford Electric Bell has been ringing constantly for over...