COPA-DATA has been developing software for the industrial automation and energy sectors since 1987. The subsidiary COPA-DATA CEE/ME has made a significant contribution to its success with its responsibility for market development and customer support in Central and Eastern Europe as well as the Middle East. Since its founding ten years ago, COPA-DATA CEE/ME has continually grown and generated a turnover of 4.3 million Euros in 2019. With additions to the sales team and its new Managing Director, Johannes Petrowisch, the company is now well positioned for the future.

COPA-DATA is the world’s largest independent manufacturer of software for the digitalization and automation of machines and plants. For over 30 years the Salzburg-based company has been developing the zenon Software Platform for process-oriented and discrete production as well as power generation and distribution. COPA-DATA CEE/ME has been successfully marketing and selling its software in Central and Eastern Europe as well as the Middle East. The company has shown further sales growth in this last year, for the tenth time in a row since its founding in 2009. To successfully continue on this track the team is being reinforced with additional employees. 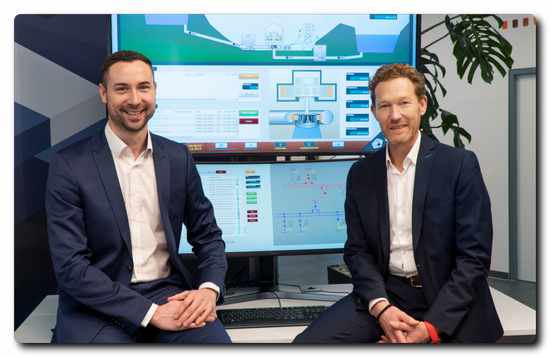 Johannes Petrowisch will become the new Managing Director of COPA-DATA CEE/ME, while co-founder Alexander Punzenberger, as proprietor, will concentrate fully on market development in the Middle East (from left to right).

Seizing the chance for growth in the region

The ongoing growth indicates that a broader positioning of the sales force is required. This is why the co-founder and previous Managing Director, Alexander Punzenberger, now in the capacity of proprietor of COPA-DATA CEE/ME, will be concentrating on market expansion in the Middle East. He explains his motivation: “This rapidly growing market is very important for us. More and more infrastructure managers see the added value of having zenon in place as a standard software for the energy and utility sectors. As the first and only independent software platform until now, zenon has recently been approved by the Saudi Arabian electrical power grid provider, Saudi National Grid.”

From the New Year Reinfried Kößlbacher, previously Head of Marketing and Sales Services, will take on a new position of Area Sales Manager for the Czech Republic, Slovakia and Hungary. COPA-DATA is thus expanding their sales team in order to reinforce their services in these countries.

Johannes Petrowisch already moved to COPA-DATA CEE/ME in November 2019. He had been working at COPA-DATA Headquarters for seven years prior to this. In his last role there he headed up the Corporate Partnerships team. His responsibilities also included managing the Partner Community, strategic partnerships, zenon Certification, IIoT/SaaS and the topic of Smart Cities.

“The years of experience he has gained at COPA-DATA will allow for a speedy and straightforward transition”, Alexander Punzenberger is convinced. “I’m excited about the collaboration and that this step will be laying the foundation for a successful future. This will allow a lasting basis to further expand and sustainably continue our success story with zenon in Central and Eastern Europe and the Middle East. This includes reinforcing the development of our locations across the region. We are planning a permanent presence in several of the countries looked after by COPA-DATA CEE/ME. We’re beginning this course with Saudi Arabia this year”.

COPA-DATA is the manufacturer of the zenon® software platform, used in the manufacturing and energy industries for the automated control, monitoring, and optimization of machines, equipment, and power supplies. Founded by Thomas Punzenberger in 1987 and headquartered in Salzburg, Austria, the independent, family-owned company employs approximately 270 workers around the globe. The distribution of software on an international scale is made possible through the company’s eleven subsidiaries and numerous distributors. In addition, more than 240 certified partner companies ensure efficient software implementation for end users in the food & beverage, energy & infrastructure, automotive, and pharmaceutical industries. In 2018, COPA-DATA generated turnover of EUR 44 million.

zenon is a software platform from COPA-DATA for manufacturing and the energy industry. Machines and equipment are controlled, monitored and optimized. zenon’s particular strength is open and reliable communication in heterogeneous production facilities. Open interfaces and over 300 native drivers and communication protocols support the horizontal and vertical integration. This allows for continuous implementation of the Industrial IoT and the Smart Factory. Projects with zenon are highly scalable.
zenon is ergonomic, both for the engineer and for the end user. The engineering environment is flexible and can be used for a wide range of applications. The principle of “setting parameters instead of programming” helps engineers to configure projects quickly and without errors. Complex functions for comprehensive projects are supplied out-of-the-box to create intuitive and robust applications. Users can thereby contribute to increased flexibility and efficiency with zenon.

The TrustSens RTD calibrates itself after every Sterilize in Place (SIP) operation to provide accurate and reliable temperature measurement. Endress+Hauser announces...

PetroHab, the world’s premier provider of Hot Work Safety Enclosures (HWSE), is pleased to announce the official launch of its...

New U.S. supercomputer is fastest on the planet

The U.S. Department of Energy’s Oak Ridge National Laboratory unveiled Summit, the world’s most powerful and smartest supercomputer, in June....

The next step: Demag V-type crane up to 50 t

Following the worldwide launch of the V-type single-girder crane, the Demag range of cranes has been extended: with its ZVKE,...

Industrial IT solutions provider, SolutionsPT, is hitting the road for a series of events focusing on ‘The Evolution of Industrial...

THE FUTURE IS BRIGHT FOR NEW GENERATION OF LIGHTING PRODUCTSTHE HUMBLE light bulb has evolved hugely in recent years and...

~ The future of vision systems in manufacturing ~ With four times as many as colour receptors as humans, the Mantis...

Industry-leading measurement distance and temperature resolution for maintenance of plants and other infrastructure Yokogawa Electric Corporation announces the release...

Altira Group joins Chevron Technology Ventures and next47 as Seeq looks to extend solutions for business insight derived from manufacturing...

It is nonsense to forecast pure electric cars costing the same as traditional ones, then life continuing much as usual....

Since September 1996, the at-speed balancing bunker in Sulzer’s Houston Service Center has been performing a critical service for clients...