A new form of energy storage – which uses massive weights in disused mine shafts – could store green energy more cheaply than batteries, an industry reports says.

Edinburgh start-up Gravitricity has patented their multi-weight system, which uses up to 24 weights totalling 12,000 tonnes stacked in a mine shaft, to capture power and then release it with sub-second response time.

The energy innovators have already received a £640,000 grant from Innovate UK, the UK Government’s innovation agency, and have teamed up with Dutch winch specialists Huisman to build a 250kW scale prototype of their idea [pictured].

Now a report by independent analysts at Imperial College London, working independently via Imperial Consultants, predicts that Gravitricity’s multi-weight system offers a better long-term cost of energy storage than batteries or other alternatives.

This leaves the firm ideally placed to tap into the growing energy storage market, which Bloomberg New Energy Finance estimates will be worth $620 billion globally up to 2040. 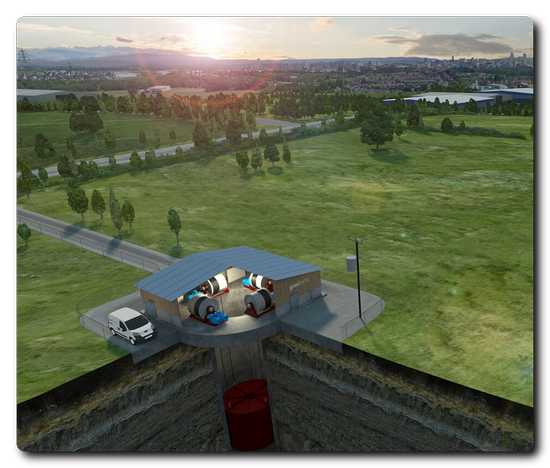 “The climate emergency means we need to find new ways to capture and store green energy so we can use it when we need it,” says Gravitricity Managing Director Charlie Blair [pictured].

“Our idea is very simple. We use excess energy to lift a massive weight or weights to the top of a shaft. These can then be stacked and released when required, delivering energy rapidly back to the grid. The beauty of this is that this can be done multiple times a day for many years, without any loss of performance. This makes it very competitive against other forms of energy storage – including lithium ion batteries,” Blair says.

Gravitricity has already received support from a number of angel investors and is now about to launch a crowdfunding campaign with CrowdCube to support their development plans.

Initially the firm will target former mine shafts, then in the longer-term they plan to sink purpose-built shafts wherever required. They are currently in discussion with mine owners in the UK, South Africa, Finland, Poland and the Czech Republic.

The report says the Gravitricty system performs particularly well in the ‘peak shaving’ market, a service which ensures the balancing of electricity demand and supply during peak demand periods to reduce the strain on power system infrastructure.

This typically requires a storage system to discharge for two to six hours, twice a day. The analysis was based on a 10MW maximum capacity delivering 24 MW hours (MWh) – this translates to around 2.5 hours discharge duration at maximum power output.

The system is also well suited to the fast frequency response market where the requirement for multiple short cycles and high power availability play to Gravitricity’s strengths.

“‘The report validates our belief that energy storage with a long-life can be built into the infrastructure of the grid, potentially saving billions in grid upgrades,” Blair says.

“Mechanical systems such as ours are very cost effective, as we can cycle several times per day with no performance degradation, enabling us to deliver a range of different services to grid operators. This means we can also stack up different revenue streams to improve our business case.”

The report was authored by Oliver Schmidt, a specialist in modelling energy storage cost reductions at Imperial College London, who was working independently via Imperial Consultants.

“The study has been rigorous in comparing all technologies on a level playing field. We have investigated a number of sensitivities, including discount rate, project duration and expected cost reductions using industry-specific learning rates.

“Gravitricity’s new system has a relatively low upfront capex and a design life of over 25 years. This explains why it is so competitive against other storage options. It is sensitive to the discount rate and the modelled project lifespan.  If we model a shorter response duration, a lower discount rate or a longer project life, then Gravitricity looks even more competitive.  I don’t expect Gravitricity to displace all lithium batteries on grids, but it certainly looks like a compelling proposition.”

For a copy of the report please contact neil@neildavidson.org.

Gravitricity uses heavy weights – totalling up to 12,000 tonnes – suspended in a deep shaft by cables attached to winches. When there is excess electricity, for example on a windy day, the weight is winched to the top of the shaft ready to generate power.

This weight can then be released when required – in less than a second – and the winches become generators, producing either a large burst of electricity quickly, or releasing it more slowly depending on what is needed.

Unlike batteries, the Gravitricity system can operate for decades without any reduction in performance.

The idea of using gravity to store energy is not new. Britain already relies on a number of pumped storage hydro schemes, such as Ben Cruachan, where water is pumped uphill to be released when required.

The start-up plans to build models from 1 to 20MW, and is designing each ‘Gravitricity Energy Storage System’ to last over 25 and up to 50 years. They are currently short-listing a number of disused mine shafts for their first full-scale working prototype in 2020. (Feasibility work in 2020, construction not until 2022.)

Forum  Energy Technologies, Inc. has delivered a Remotely Operated Vehicle (ROV) to ESEA Submarine AS to perform a variety of...

The technology group Wärtsilä has signed a memorandum of understanding (MoU) with Petrocity, the parent company of the new port...

Silvadata and MHG Systems start their cooperation on mobile services

Oy Silvadata Ab and MHG Systems have signed a cooperation agreement on the development and marketing of mobile applications for forest...

Essity and Microsoft partner on Internet of Things

Essity, a leading global hygiene and health company, and Microsoft will partner to leverage the power of big data and...

The APC launches Power Electronics and Electrical Energy Storage Spokes bringing together academia and business to take ideas into production...

The rig can test complete instrument assemblies at pressures up to 15,000 psi to meet customer, insurance and safety requirements. Endress+Hauser...

Metso will take part in Flow Control Exchange India 2019 and will lead off with the seminar, "Applying IIoT methods...

Senseye, the Uptime as a Service company, has published a free white paper for manufacturers and asset owners about prognostics,...