It is nonsense to forecast pure electric cars costing the same as traditional ones, then life continuing much as usual. The up-front price of pure electric PE cars will be dropping below that of internal combustion engine ICE ones around 2025. The fundamentals are now clear. Short range electric cars will continue to sell badly because of range and financial anxiety: their resale value after three years can be down 80%. 200 miles/ 320 km is the tipping point where resale value can be only 40% down on purchase price. See the IDTechEx report, “Electric Vehicles 2020-2030” for the full picture of 100 categories of electric vehicle EV by land, water and air.

Raghu Das, CEO of IDTechEx advises, “Many barriers are falling. Vast numbers of public chargers will no longer be essential as electric ranges increase. Indeed, the new solar cars can be operated entirely from daylight and a regular domestic plug. The frugal, short-distance traveller will use daylight alone. The wealthy will buy cars with up to 800-1000 km range, such as the Lightyear One or the next Tesla Roadster, charging as infrequently as a regular car – no problem at all. Such ranges will be commonplace by 2030. Indeed, the Lightyear One is intended to be cost-reduced to more mainstream prices where the shorter range Sono Motors Sion solar car is today with a $145 million orderbook to prove the point. Plenty of people will sacrifice acceleration to escape the misery of roadside charging, particularly in cities where most of us now live. 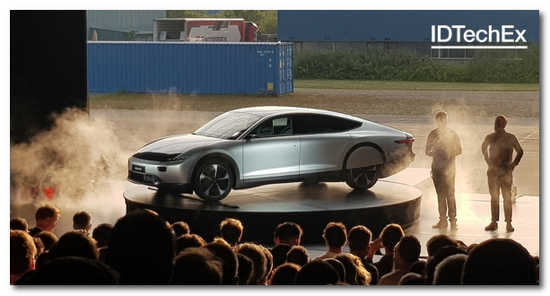 In motor industry terms, the 2025 tipping point is very close, and the industry may not have fully grasped the seismic effect it will have on sales of yesterday’s powertrains, including full hybrids HEV and plug-in PHEV. These do not have the cost reduction potential and they will increasingly incur hassle from gasoline station numbers declining, restrictions on ICE vehicles and decline in resale price. 48V mild hybrids may be an exception, because they will get pure-electric modes at a fraction of the cost of HEV. Significantly, Continental has just announced such a 48V powertrain. In contrast, although pure electric cars cost much more today and their insurance is much higher due to being a function of price and scarcity of trained repairers, that will be gone by 2025 with the ten times higher reliability and no inflated price benefitting insurance, which may even go lower than conventional.

So what is the pent-up PEV demand being released? It took only ten years for major cities to flip from horses to cars. New cars could well be 100% pure electric in 2035, tougher emissions laws underwriting that.

However, Das cautions, “As car manufacturers diverted by lesser opportunities go under and the pure-electric winners prosper there is only one cloud on the horizon - lithium-ion batteries.  Although they may have dropped to only 20% of car cost by 2025, supply is an issue. IDTechEx estimates that a demand of around 2,000 GWh just for Li-ion batteries in cars will exist in 2028 if car manufacturers can make enough pure electric cars at their projected costs. That exceeds the committed capacity of such batteries for all uses, let alone cars at about half of the overall Li-ion demand. Gigafactory commitments increase all the time but it is far from certain that they will rise sufficiently to meet demand and there are unlikely to be other batteries or supercapacitors available within the coming decade that can meet more than a minority of the emerging needs.” 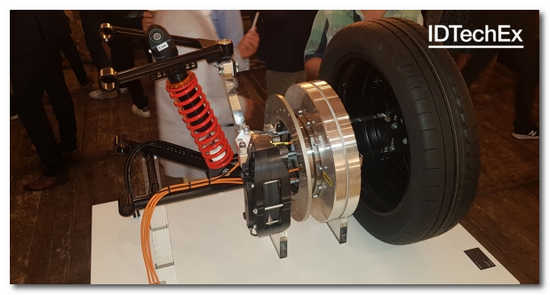 One of the four axial flux in-wheel motors of the Lightyear One, part of a system giving exceptional powertrain efficiency and therefore range. Source: IDTechEx

IDTechEx believes that the restrictions on Li-ion battery output go way beyond factory capacity. There may be temporary shortages of the required cobalt and even lithium. Ongoing fires cause output delays and distrust. IDTechEx finds they are more prevalent where companies push the limits of performance and where battery makers cut corners by changing all parts without thorough testing and prudent scale up in the race for higher energy density. In 2018, China recorded at least 40 fire-related incidents involving electric vehicles. NIO recently had one of its ES8 SUVs burn, the third time the model has been involved in an incident in about two months. The Chinese Government requires a recall of 4,800, a quarter of all sold. Tesla recently had two car fires in China. Audi is recalling its first all-electric vehicle sold in the US because of the risk of battery fire. Customers and authorities know that fires are much less frequent with EVs compared to conventional cars, but they rightly demand even fewer fires. From 2025, availability of non-flammable LIB will be a huge step forward, but they will take time to be fully acceptable and accepted. For more see the IDTechEx report, “Lithium-ion Batteries for Electric Vehicles 2020-2030”.

In view of all this, will price parity with electric cars around 2025 lead to every new car being pure electric by 2030 or will it be a non-event due to battery problems? IDTechEx calculates something in-between but, make no mistake, that will still be enough to pull down some famous names caught with stranded assets in the ICE, HEV and PHEV space. There is scope for multi-billion dollar businesses in pure electric cars to be created very rapidly from 2025. A rush of affordable PEVs with no charging problems will even embolden legislators to bring forward dates when polluting vehicles are banned from cities, thus saving hundreds of thousands of lives yearly. Yes, a tipping point.

IDTechEx guides your strategic business decisions through its Research, Consultancy and Event products, helping you profit from emerging technologies. For more information on IDTechEx Research and Consultancy contact research@IDTechEx.com or visit www.IDTechEx.com.

THE FUTURE IS BRIGHT FOR NEW GENERATION OF LIGHTING PRODUCTSTHE HUMBLE light bulb has evolved hugely in recent years and...

Sulzer has once again broken the conventions in the name of efficiency. The new CPE ANSI process pumps are specifically...

Gibbons Engineering Group has cause for celebration this year, with 2019 marking their 50th anniversary. Half a century ago, friends Wilfred...

HARTING AG Biel, a division of the HARTING Technology Group based in Biel, Switzerland, used the recent Geneva Motor Show...

The BASF and Volkswagen international “Science Award Electrochemistry” is now in its seventh year. Starting today, scientists of excellence from...

Project teams can avoid delays and eliminate errors by automating SIS configuration Emerson and exida announce the release of the DeltaV™...

Rotork has increased the versatility of the CK range of modular electric valve actuators with the introduction of the CK...

HexArmor® has just announced that it has formed a strategic partnership with uvex Winter Holding, parent of the uvex safety...

MULTIFUNCTIONAL STREET APPLICATION LAUNCHED IN ROTTERDAM With the launch of CENT-R, the Dutch city of Rotterdam and innovative developer Lightwell have...

Purolite Corporation will relocate its global headquarters to King of Prussia, Pa., approximately 11 miles northwest of its current location...

Lesjöfors, one of Europe’s leading manufacturer of springs, pressings and wire parts acquires Spirbelt Beheer B.V., which includes its two...