Like most other new products, electric vehicles sell in an S curve of a slow start with over supply. Then comes fastest growth with supply sometimes unable to keep up with demand then comes saturation. Take pure electric buses as an example. Here China rapidly deployed 400,000, 99% of the total number in the world, then it collapsed subsidies causing a collapse in deliveries and sadly it mainly makes smoking buses again.

The rest of the world is beginning to compensate. For example, recently Qbuzz in the Netherlands has ordered 159 pure electric buses, Helsingborg Sweden 76, Brussels Airport 30 and London 68 pure electric double deckers. Cities across the UK recently placed a total of 263 orders for zero-emission buses. Warsaw will order 130 pure electric buses for delivery by 2021. Kazakhstan is expecting 700 electric buses and Azerbaijan another 500 over the next three years. However, India has the largest potential, with a government plan for an initial 10,000 pure electric buses replacing some of the 1.6 million registered buses there, all of which must go, says the government, sensitive to the deaths they cause. The Indian state of Uttarakhand has ordered 500 electric buses. Now India is responsible for about 25% of the pure electric bus orders outside China. The Chinese – mainly BYD - are behind much of the supply but by no means all. Tata Motors in India has orders from six cities for a total of 255 pure electric buses. Large subsidies are an essential part of the take-off everywhere, China being at the top of the growth curve and everywhere else at the fast growth part, though China may see another S curve based on free market demands when pure electric has price parity. For more, see the IDTechEx report, “Electric Buses 2019-2029”. 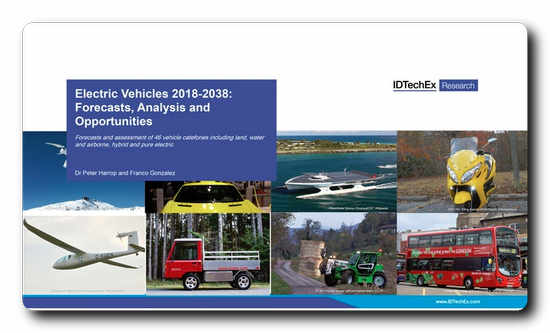 Battery costs have been a primary impediment. However, in an interesting development, busy bus routes are seeing progress to less or no battery. Eight countries have ten-second charging supercapacitor large buses now and non-stop top-up charging in many forms has arrived from solar bodywork to intermittent catenary, rails, coils in the road. Top-up, including stationary forms with gantries etc at bus stops, typically leads to 80% less battery and this and the reduction in battery prices has led to some projections of the battery being a mere 6% of bus cost in ten years’ time. For more on all that see the IDTechEx Research report, “Energy Storage for Electric Buses and Trucks 2019-2029”. That will hasten the day when the up-front price of pure-electric buses is at parity with diesel. The rising cost of diesel powertrains also helps. Consider the extra cost of diesel fume reduction measures such as 48V mild hybridisation and the cost of adding equipment to treat emissions. IDTechEx currently projects price parity around 2030 for large buses but the future can come early.

Like buses outside China, pure electric cars are now near to the fastest-growth phase at around 70% increase in numbers sold yearly, with subsidies already less critical because parity is approached earlier with small vehicles. Many now agree with IDTechEx that the smaller pure-electric cars will have lower up-front price than internal combustion equivalents around 2023 – the killer blow. This time China is in synch with the rest of the world: it has the largest pure electric car sales but, as a percentage of the number of cars being made, nothing exceptional. China is expected to dominate global manufacturing of pure electric cars just as it has grown to be the biggest global manufacturer of conventional vehicles. For the untold story of the formidable innovation in China in many types of electric vehicle from pure- electric inland ships and large high-altitude solar drones to robot farm tractors see the IDTechEx Research report, “Electric Vehicles in China 2019-2029”.

Evidence from Norway -with the largest percentage of pure electric new cars - suggests that the biggest obstacle to speeding up the electrification of road transport could now be a lack of e-vehicles with Kia eNiro on one year delivery and Tesla 3 still keeping people waiting. Volkswagen even announced that the Passat GTE and Golf GTE have been ‘closed to ordering’, due to the exceptionally long waiting times. It does not help that there is a ready supply of short-range pure-electric cars because you have to be pretty wild eyed to buy one. The range anxiety is compounded by resale value dropping at twice the rate of the others.

IDTechEx is hosting a new event in its ‘Business & Technology Insight Forums’ series, this time on Electric Vehicles and Energy Storage, to be held in Novi, Michigan on 10-12 June 2019. The Business & Technology Insight Forums take place across the world and teach global markets and technology on topics of particular interest to the local industry. Emphasis is on current and future trends including many that are typically ignored or under-represented but becoming vitally important.

The six sessions on “Electric Vehicles and Energy Storage” do just this. They last 2.5 hours each and you choose which you purchase. Audience participation and interaction are encouraged and you take away a booklet of the newly-prepared slides presented.  They are based on the famous IDTechEx facts-based analysis from globe-trotting PhD analysts able to do technical interviews in local languages. Visit www.IDTechEx.com/novi to find out more and register with the latest attendee discount.

Another resource is the world’s largest choice of up-to-date reports and relational databases on electric vehicles, systems and components from IDTechEx Research – contact research@IDTechEx.com or visit www.IDTechEx.com/research/ev for more information.

IDTechEx guides your strategic business decisions through its Research, Consultancy and Events services, helping you profit from emerging technologies. Find out more at www.IDTechEx.com

Figures by the International Federation of Robotics state that robot sales in Poland grew by 26 per cent between 2010-2015....

Innovative engineering firm Aqua Cooling, based in Hampshire, has been honoured at a royal reception for winning the UK’s most...

Save time and lost revenue with this easy valve matrix solution

Processes in hygienic industries - such as beverage, food, dairy, pharma and personal care - are becoming increasingly complex. Some...

Moog – a designer and manufacturer of high performance motion control products, solutions, and services – will launch its new...

Vasant Bennett, Managing Partner of Barry-Wehmiller International Resources (BWIR), announced a new identity for the organization, which will now be...

The technology group Wärtsilä has signed a memorandum of understanding (MoU) with Petrocity, the parent company of the new port...

Recently introduced by Thomson Industries and available with full support from its UK distribution partner Heason Technology, the new MLA...

Using ABB’s safety PLC, standard HMIs such as control panels and mobile devices can be used to alter functional safety...

By designing an explosion-proof enclosure for its leading light curtain technology to ATEX and UL Listed hazardous area standards, SICK...