Leading brands such as Zunum Aero, Tesla and Orchid Monroe, as well as exhibitors and attendees of CWIEME gathered at the Hyatt Regency Hotel Chicago on November 15 to celebrate the relaunch of the unmatched conference and trade show for electric motor, generator and transformer manufacturing in the Americas.

The new owner ITE Group has rebranded CWIEME Americas to reflect the wider appeal of the event for players from the United States, Canada and Latin America in the automotive, construction, HVAC and power generation industries. The first event under the new name will take place in Chicago from September 17-18, 2019.

CWIEME Americas relaunch event offered a taste of what is to come for the North American electrical manufacturing industries in 2019. Attendees were excited to hear about ITE Group’s plans for the transformation of CWIEME Chicago, which includes significant investments with the aim of supporting manufacturers and suppliers to grow over the long term. Attendees included United Technologies Aerospace Systems, Schaeffler Group USA, Ramco Electric Motors, and Woodward, to name a few. 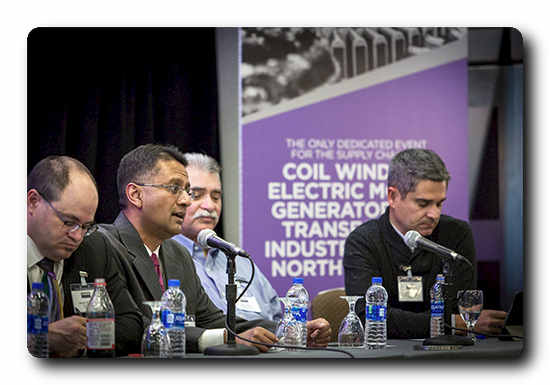 The panels and presentations were followed by a cocktail reception, which provided a great setting for one-on-one discussions and networking. It was also an opportunity for attendees to meet CWIEME Americas Director Jamie Reesby, who will be assisting in the planning for CWIEME Americas 2019.

“We were excited to have such an enthusiastic and engaged audience at the relaunch event,” said Reesby. “As 2019 approaches the rebranding of CWIEME Americas and the establishment of a dedicated team is our main focus. This will allow us to hone in on what’s truly important to both our exhibitors and attendees, so that we can provide the most valuable trade show possible.”

Climeon AB has been awarded "Technology Innovation Award" by the multinational consulting and analytical firm Frost & Sullivan for its...

Industry-leading measurement distance and temperature resolution for maintenance of plants and other infrastructure Yokogawa Electric Corporation announces the release...

ÅF Pöyry acquires CTT Systems’ electronic unit in Gustavsberg, Sweden. Through the acquisition, the company strengthens its offer within product...

PeakVue™ Plus vibration analysis firmware enhances decision-making support for technicians in the field Emerson is releasing PeakVue™ Plus, a technology enhancement...

Parents of the revolution: why we must start planning for the coming digital age today

Asia-Pacific and EMEA will drive the high voltage circuit breakers market over the next four years, says GlobalData

The global market for high voltage circuit breakers (HVCBs) is set to grow at a compound annual growth rate (CAGR)...

Performance testing of high voltage motors and generators is usually carried out to determine benchmark data following a major repair....