The world’s most advanced supercomputer is called Summit, and it recently powered up at a federal laboratory in Tennessee.

Built by a team from the U.S. Department of Energy’s Oak Ridge National Laboratory and American companies IBM and Nvidia Corporation, Summit sports eye-popping performance. At its peak, Summit can calculate 200 petaflops. That’s 200,000 trillion calculations per second, using the standard measure for supercomputer power. According to the TOP500 List, which ranks world supercomputers, Summit was the fastest on the planet as of June 25.

“It is faster than anything the world has known,” IBM chief executive Ginni Rometty said at an event celebrating the new supercomputer. 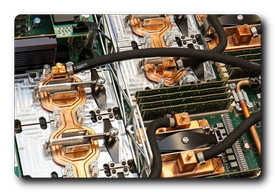 “I think we’re all searching for analogies so that everyone can understand that,” she said. “Actually, if you think about it, it is millions of times faster than what would be a really, really good, high-end desktop [computer].”

What can the world do with 200 petaflops? Early projects will tackle models of quantum materials, fission and fusion energy, bioenergy and astrophysics, Zacharia said.

One of Summit’s most promising applications is cancer research. The supercomputer will analyze a massive amount of health data to tease out hidden relationships between genes, biological markers and the environment.

Other researchers are using Summit to understand the traits that influence complex health challenges such as Alzheimer’s and addiction. By combining health data with underlying genetic information, scientists can home in on risk factors that no human could calculate, computational biologist Dan Jacobson said.

One thing is clear: Supercomputers have come a long way in the past few decades. Zacharia said today’s smartphones are more powerful than the supercomputers that decoded the human genome in 1995.

In this era, Summit will change people’s lives, U.S. Secretary of Energy Rick Perry said at an event celebrating the new supercomputer on June 8. “This is about changing the world,” he said.

Senseye, the Uptime as a Service company has just announced that it is celebrating its global recognition as a predictive maintenance...

Established in 1994, Vivago is a forerunner in personalised healthcare technology. Unique solutions support the whole care chain from diagnostics,...

AVT Reliability continues to invest in developing the skills of their team of condition monitoring experts in Europe. This drives...

In a project to increase safety, Rotork Skilmatic SI electro-hydraulic actuators have been installed in the Joint Users Hydrant Installation...

Weld Purge Monitors® are an essential tool for the Process Industries with various models serving different levels of weld purge...

Industrial processes across the globe require pumps to operate reliably and efficiently. The latest pump designs and coating technologies offer...