Industrial software provider, COPA-DATA, has expanded its UK team with the appointment of three employees. The new recruits follow COPA-DATA’s relocation of its UK headquarters to Cardiff, which was intended to facilitate the company’s projected growth.

Alan Binning has joined COPA-DATA UK as Regional Sales Manager. Boasting over 16 years of experience in automation and industrial solutions, including several, including time as an applications engineer, Binning will bring a wealth of industrial knowledge and experience to the team. This skillset is bolstered by a bachelor’s degree in Electronic Engineering from the University of Reading.

With an extensive background in multi-channel marketing, Abigail Walters-Davies will now lead COPA-DATA’s marketing efforts in the UK. Walters-Davies is responsible for communications across COPA-DATA’s network of customers in the energy and infrastructure, pharmaceutical, food and beverage and automotive industries.

As Marketing Manager, Walters-Davies will also manage and maintain relationships within COPA-DATA’s extensive Partner Community, including the local promotion of COPA-DATA’s Global Partner Academy (GPA) 2018, which will be held on 13 to 14 June in Vienna, Austria. 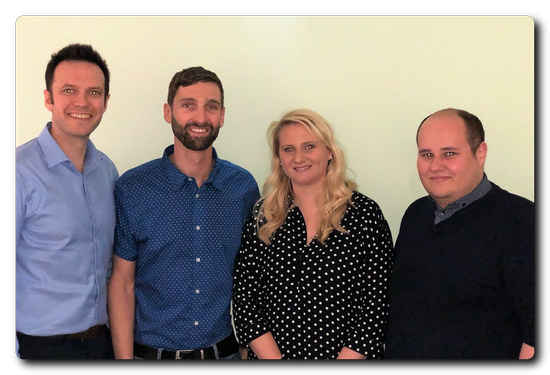 To further support the company’s technical capabilities, Aaron Cowdry will also join the team as a Technical Consultant. As a graduate in Computer Networks from University of Wales, Trinity St. David’s, Cowdry will deliver in-depth knowledge of cyber and network security to support customers of COPA-DATA’s industrial software, zenon.

Markus Hillinger has also joined the team in a move from COPA-DATA’s headquarters in Austria. Having worked at COPA-DATA for over a year, Hilllinger’s experience as an international sales consultant will assist in the UK team’s continual growth.

“Last year’s move to Cardiff marked ten years of COPA-DATA’s presence in the UK,” explained Martyn Williams, Managing Director of COPA-DATA UK. “However, it has also provided us with greater opportunities on our doorstep, including the appointment of three new members of the UK team and the chance to create new partnerships and collaborations.”

On COPA-DATA
COPA-DATA is the technological leader for ergonomic and highly-dynamic process solutions. The company, founded in 1987, develops the software zenon for HMI/SCADA, Dynamic Production Reporting and integrated PLC systems at its headquarters in Austria. zenon is sold through its own offices in Europe, North America and Asia, as well as partners and distributors throughout the world. Customers benefit from local contact persons and local support thanks to a decentralized corporate structure. As an independent company, COPA-DATA can act quickly and flexibly, continues to set new standards in functionality and ease of use and leads the market trends. Around 135,000 installed systems worldwide provide companies in the Food & Beverage, Energy & Infrastructure, Automotive and Pharmaceutical sectors with new scope for efficient automation.

On zenon
zenon is a software system from COPA-DATA for industrial automation and the energy industry. Machines and equipment are controlled, monitored and optimized. zenon’s particular strength is open and reliable communication in heterogeneous production facilities. Open interfaces and over 300 native drivers and communication protocols support the horizontal and vertical integration. This allows for continuous implementation of the Industrial IoT and the Smart Factory. Projects with zenon are highly scalable.

zenon is ergonomic, both for the engineer and for the end user. The engineering environment is flexible and can be used for a wide range of applications. The principle of “setting parameters instead of programming” helps engineers to configure projects quickly and without errors. Complex functions for comprehensive projects are supplied out-of-the-box to create intuitive and robust applications. Users can thereby contribute to increased flexibility and efficiency with zenon.

Aberdeen-headquartered Ashtead Technology has secured a deal with leading international contractor Van Oord to provide the latest generation of video...

Siqura’s marine dome camera will assist The Ocean Cleanup foundation in its work in the Pacific Ocean starting mid-2018. The...

Sensor Products Inc., a developer and distributor of cutting edge pressure and force sensors announces a key enhancement of their...

At the Filtech conference in Wiesbaden, Germany, from October 22-24, Dr Philipp Wimmer of Kelheim Fibres explained how the properties of...

Datalogic is pleased to announce the first release of its OEMConfig application, one of the most important changes to Android™...

Favourable business environment, Brexit, proximity to Africa, and rapidly growing global Infrastructure as a Service market makes Milan and the...

Sulzer has made an investment to acquire 25% of Tamturbo Plc. Founded in 2010, Tamturbo is a technology company that...

200 Million New IPv4 Addresses Enter the Market: What to Expect?

At the end of 2019, the US government passed a new bill authorizing the Department of Defence to sell around...

CHANGING FROM GAS TO HEAT PUMPS AS THE PREFERRED HOME HEATING FOR NEW BUILDS IS PREMATURE AND PROHIBITIVELY EXPENSIVE SAYS...

–With new functions for high-speed measurement and PID control– Yokogawa Electric Corporation announces that it will introduce release 4 of the...