~ The future of vision systems in manufacturing ~

With four times as many as colour receptors as humans, the Mantis shrimp has the most impressive eyes in nature.  Manufacturers have long relied on human vision for complex picking and assembly processes, but 3D vision systems are beginning to replicate the capability of human vision in robotics. Here, Nigel Smith, managing director of Toshiba Machine partner, TM Robotics, gives three rules to live by when choosing a 3D vision system for manufacturing.

Advanced 3D vision systems are a stark contrast to the vision software of manufacturing’s past. Many existing systems still require professional CAD programming to ensure the robot can recognise shapes. However, even after programming, this software can have difficulties recognising multiple items at once.

A common application for vision systems is removing and sorting items from a bin. While CAD-based systems can identify items in a bin, the challenge is recognising the position of each item when presented in a random order — let alone determining the best method for the robot pick them in.

Advanced vision systems eliminate this problem by using passive imaging to enable the robot to automatically identify items, regardless of their shape or order.

Toshiba Machine’s vision system, TSVision3D, for example, uses two high-speed cameras to continuously capture 3D images. Using intelligent software, the system can process these images and identify the exact position of an item. This determines the most logical order to pick them up and does so with sub millimetre accuracy, with the same ease as a human worker. 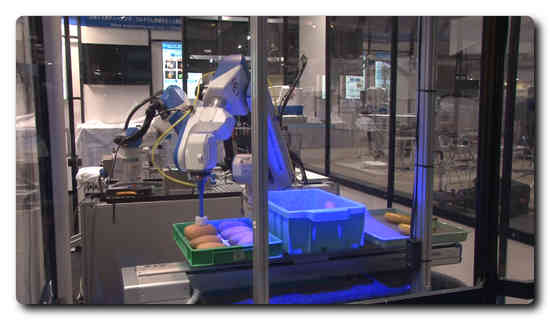 Deploying a robot for bin-picking isn’t advantageous if the robot cannot identify the edges of the bin. Considering the speed and strength of most 6-axis robots, hitting the box sides could easily halt production or damage the product.

Some manufacturers believe that motion stereo systems can effectively imitate a human’s perception of an item. Motion stereo systems use one camera, usually mounted on a robotic arm, to enable the system to move and take two or more photographs of an object. However, these systems require absolute precision as even the slightest movement can cause disparities in data and skew the measurement.

For manufacturers hoping to automate their box-picking processes, they should identify whether the system has a collision avoidance function. Advanced systems, including TSVision3D, enable the system to be programmed according to the size of the bin, ensuring the robot can dive into the box without a hitch.

Automation for jobs like bin-picking are designed to free manual operators from repetitive and menial tasks and speed up operations. However, some traditional vision systems involved multiple hurdles to implement, including longwinded installation methods and high levels of technical know-how.

Using 3D vision systems for bin-picking, cycle times can be as fast as 0.7 seconds. But, these productivity gains are useless if implementation of the software has high costs for time and staff resources.

When choosing a system, manufacturers must strike a balance between potential productivity gains and the resources required for installation. Today, manufacturers should opt for software that anyone, even with minimal training, can understand.

Eyes are a testament to evolution’s creativity. While they all have the same basic duty, the more advanced the vision system, the more information it can acquire. When choosing a vision system for manufacturing applications, manufacturers should consider how the system will improve their process, how it will manage complex requirements and how easy it is to understand and implement it.

More information on Toshiba Machine’s 3D vision system, TSVision3D, can be found on the TM Robotics website. As a Toshiba Machine partner, TM Robotics has assisted in the launch of TSVision3D in Europe and North and South America and can be seen demonstrating the system in this video

About TM Robotics: TM Robotics has installed thousands of robots in factories throughout the world, including North and South America, India, Russia, Europe, the Middle East, Africa and Australia. Many of the top manufacturing companies depend on TM Robotics’ product offerings for their reliability, performance, and overall value.

In partnership with Toshiba Machine, TM Robotics is the only company that offers a comprehensive range of all three categories of robots; 6-axis, SCARA, and Cartesian. These are designed and built in-house.

Honeywell (NYSE: HON) announced that its Elster business, a global provider of electricity, gas and water meters and related software...

When billionaire Alibaba founder Jack Ma wrote in an open letter earlier this year, “We need to fight counterfeits the...

Why Actuators for Connected Industry Run on Brushless DC Motors

Greater Manchester gears up to put manufacturing back in the spotlight

The publication of Greater Manchester’s Manufacturing Strategy, a six-step plan that is backed by prominent business figures and intends to...

Globalstar Europe Satellite Services Ltd., a wholly owned subsidiary of Globalstar Inc. and the leader in satellite messaging and emergency...

Partnership will provide acceleration of digital transformation in Italy.  e-matica, a leading systems integrator and applications development firm and a Select...

Engineering Services, the biggest business area at Semcon, is undergoing restructuring to make it more capable of adapting to market...

Emerson (NYSE: EMR), a global automation technology and engineering company, has been named the `Industrial IoT Company of the Year’...

Predictions for manufacturing: Industrial trends for 2019

Industry 4.0, the Fourth Industrial Revolution or the Industrial Internet of Things (IIoT). Regardless of the phrase used to describe...

Fast-evolving engineering company Power Jacks has increased its specialist lifting services with the introduction of a new division specialising in...