Battery elimination, indeed elimination of all energy storage, is moving to even higher power, from electronics to electrical engineering. EnOcean remotely operated radiator valves work at watts captured thermoelectrically without batteries and EnOcean technology is being adapted to provide watts for the multiple transducers and sensors in future Internet of Things nodes. There is potential for billions of units yearly as detailed in the new IDTechEx report, “Battery Elimination in Electronics and Electrical Engineering 2018-2028”. 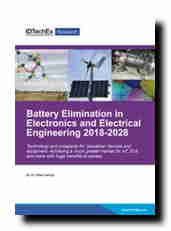 Leading author of the report, Dr Peter Harrop notes, “To celebrate the 400th anniversary of the Pilgrim Fathers going from Plymouth UK to Plymouth USA, a boat of the same length with sails and solar will complete the trip autonomously with no crew. Using its sails, Mayflower Autonomous Research Ship (MARS) will hit 20 knots (37 km/h or 23 mph). The sails will be automatically stowed when wind abates: then its solar-powered electric motor will achieve up to 12.5 knots (23 km/h or 14 mph). The solar cells will generate enough current that if traveling at 5 knots (9 km/h or 6 mph) under motor power, the ship’s range will be unlimited, needing no battery say the designers. Some of those cells will be on a folding wing opening in calm seas.  Yes, batteries can be eliminated by prudent combination of mechanical and electrical energy harvesting like sails with solar and helium with solar employed by the Canadian Solar Ship energy independent transporter based helium aerofoils and carrying 35 tonnes autonomously. There are pure electric solar golf cars and 3 wheel taxis on sale. Do you really want to play golf in the dark? Abandon the battery for daytime use when highest-efficiency expanding solar is adopted.”

The Sunniclist solar 3 wheeler from Greece goes 70 km a day without a battery at 690W peak. Powerful Hanergy solar cars in 2020 will use extending GaAs solar previously used in aerospace and military applications. Batteries will be an optional extra for performance boosting and night time operation. However, it is not all about photovoltaics when we eliminate energy storage from high power vehicles and equipment.

Lead acid batteries were in all pure electric land vehicles, as well as hybrids, but now there are a rapidly increasing number of vehicles managing with the lithium-ion traction battery alone such as the Porsche Spyder hybrid and many pure electric cars. So-called Battery Elimination Circuits (BEC) are involved. This replacement of two large batteries with one is a first step towards complete independence from batteries.

Meanwhile, at the University of Wisconsin Madison, a toy car has uses triboelectric tires to flash LEDs without a battery raising the intriguing prospect of regular cars making hundreds of watts that way. Lord Drayson, former minister in the UK government, developed a pure electric racing car that inspired the later Formula E. Continuing the environmental theme but at low power he has designed and sells the first volume product powered by ambient radio waves and no energy storage. As a surrogate for city pollution in general it monitors carbon monoxide because this requires little power. No matter that it is not super accurate and it does not always work, he argues that it acts as a useful monitor of the unacceptable pollution in cities like London where under 1% of cars and buses are pure electric and up to 10,000 people die unnecessarily every year from particulates and acid gases mainly emanating from traditional vehicles. Carbon dioxide boosting global warming is inadequately controlled as well.  This study again shows how compromises in specification are more frequent nowadays in order to get rid of batteries and make things hassle free and affordable, whether we are talking microwatts or kilowatts.

Much more to come

“There is ten to one hundred fold improvement to come in eliminating batteries from electronic and electrical equipment and in vehicles land, water and air. New forms of energy harvesting have much less intermittency creating less need for batteries. Consider Airborne Wind Energy involving energy positive tethered drones up where the winds are consistent and stronger. Magnetostrictive wave power is another example. Regeneration in vehicles gets cleverer with electricity produced from suspension and tires. Electric motors get more efficient even before gains expected from structural electronics. Components and circuits continue to improve by using lower power and work without heavy water cooling.

As yet, few designers even think of combining three, four or five types of energy harvesting. There are more specification compromises and even lower power consumption electrical systems to assist. Some energy harvesting is becoming viable at ten times the power – consider expanding GaAs solar becoming affordable and replacing fixed single-crystal silicon panels on a vehicle: three times the efficiency and up to four times the area. Toyota and IFEVS have just announced super-efficient small wind turbines to erect when vehicles are stationary (hotel facilities and task performance with no battery) and on boats even when under way. Usually the improvements leading to battery elimination are multiplicative: they do not simply add.”

IDTechEx is staging the world’s first conference and exhibition on “Energy Independent Electric Vehicles” 27-28 September at the Technical University of Delft, Netherlands. Some have no energy storage. This event will embrace the commercial opportunity and technology roadmap of the vehicles by land water and air and their enabling technologies. It is staged by analyst IDTechEx which has the only comprehensive reports and consultancy on EIVs and their technologies such as structural electronics, triboelectric and 6D motion energy harvesting and extreme light weighting. The overview report is, “Energy Independent Electric Vehicles Land, Water, Air 2017-2037”.

IDTechEx guides your strategic business decisions through its Research and Events services, helping you profit from emerging technologies. We provide independent research, business intelligence and advice to companies across the value chain based on research activities and methodologies which provide data sought by business leaders, strategists and technology scouts to aid their critical business decisions. To discuss your needs please contact us at research@IDTechEx.com or see www.IDTechEx.com

HARTING has introduced a new version of its popular M12 circular connector in the IEC 61076-2-111 standard K-coding. The new...

Performance testing of high voltage motors and generators is usually carried out to determine benchmark data following a major repair....

–Expanding business in the renewable energy, pharmaceutical, and food industries– Yokogawa Electric Corporation has announced its new subsidiary in Norway to...

Konecranes offers a wide range of cranes, lift trucks and services leading to increased productivity in ports. As the requirements...

Atlas Copco Compressors has achieved three new certifications for its operations in the UK following the completion of a nationwide...

The industrial automation trends making waves in manufacturing The shift towards digital transformation in industry has already taken place. Manufacturers have...

Yokogawa Europe has introduced a new CAN FD monitoring module for its ScopeCorder family of portable data-acquisition and recording instruments....

Memor™ 10 rugged mobile computer by Datalogic: DARE TO BE SMART

Datalogic, a global leader in the automatic data capture and process automation markets, is proud to announce the Memor™ 10...