SOFTWARE that allows air conditioning companies to design system layouts accurately and efficiently without leaving the office is being rolled out globally.

Plandroid, a program from Delft Red Simulation Technology in South Australia, uses a standard floor plan drawing to create the optimal heating and cooling solution for a property and provides a project quote in minutes.

International demand for the software has grown over the past year from zero to about 10 per cent of the company’s revenue and includes customers in South Africa, New Zealand and the United States.

Delft Red Simulation Technology founder Mike Garrett said he expected exports of Plandroid to rise significantly in the next year and estimated the business to almost double in size by 2018.

He said the company was expanding rapidly to meet demand and was aiming for a push into Europe in the coming months.

“The industry standard is still graph paper and drawing rough hand designs with crayons,” he said.

“It’s inefficient and using Plandroid they can do all the planning in a fifth of the time.

“The thing about Plandroid is it’s a simple, point-and-click, drag-and-drop program that anyone can use – you don't need to be an engineer to get the right design.”

The software is targeted towards large manufacturers such as Advantage Air, which then use installation teams to deliver their products.

These smaller teams are able to choose from a stock list of items from the air conditioning companies and drag them onto a CAD-style ducting design superimposed over a house plan. This eliminates the need for custom designing of a project.

It also saves favoured designs as pre-sets to be used on other buildings. 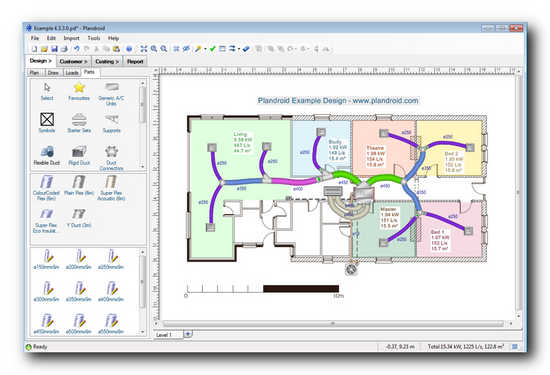 Garrett said Plandroid would be beneficial for shopping centres, airports, factories and large commercial buildings but was primarily used for high-end houses.

Delft Red Simulation Technology has more than 350 clients around the world and is in the process of expanding the program to include more features.

“We are working on a lighting mode right now,” Garrett said.

“The old barriers between electricians, plumbers and air conditioning installers are being reduced and our program will expand into more of those jobs.

“In the future you will be able to do solar panel installations, underfloor heating and more electrical designs throughout the house.”

Using remote access technology, the company supports customers across Australia and the world.

Delft Red Simulation Technology is based in South Australia’s capital Adelaide, at the Base64 business centre run by technology entrepreneur Simon Hackett.

Hackett was part of the group that developed the Australian Academic and Research Network (AARNet) – the first emergence of the Internet in Australia.

Bizerba was awarded the Top Supplier Retail 2020 seal by the EHI Retail Institute as part of the reta awards...

Like most other new products, electric vehicles sell in an S curve of a slow start with over supply. Then...

Since the beginning of 2015, the flame-retardant polybutylene terephthalate (PBT) Ultradur® B4450 G5 (halogen-free) from BASF has been used in...

Dr. Thomas Alt will support Ubimax in his function as a member of the advisory board in its strategic orientation...

Clear commitment to successful partnership / High-karat tournament with international lustre The HARTING Technology Group is once again the "Official Technology...

Introducing the R-Sensors, NIVUS GmbH provides another expansion of the product portfolio in terms of contactless level measurement. The sensors...

Dietsmann, a privately-owned Dutch multi-local company and a global front runner in Advanced Predictive Maintenance for the energy industry, is...

The BACnet Testing Laboratories, BTL for short, have confirmed that the automation software zenon by COPA-DATA complies with the criteria...

The acquisition of Light Bureau reinforces ÅF’s offering within lighting design and provides an improved platform for taking on international...