A secondary lip on the seal withstands high pressure cleaning and offers increased resistance to the ingress of dust and other contaminants, while the seal’s internal geometry has been optimised for smooth running and improved grease retention. 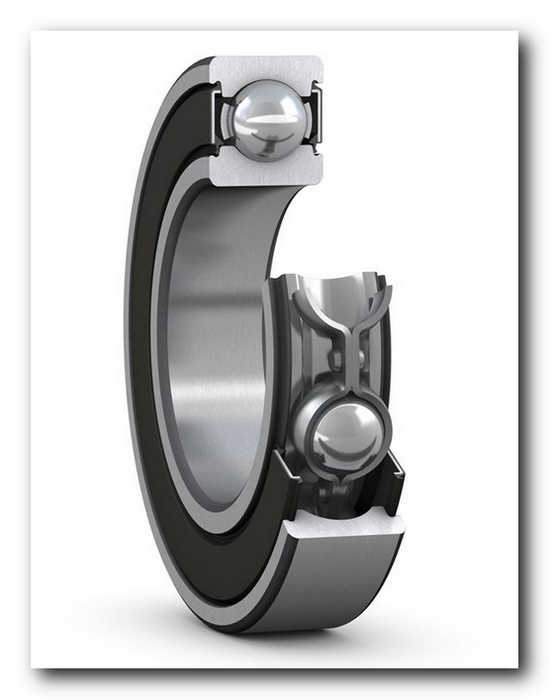 The seal is made from acrylo-nitrile-butadiene rubber (NBR), which is resistant to mineral oil based lubricants, petroleum products and animal or vegetable fats. It has an operating temperature range of –40 to +100 °C and up to +120 °C for brief periods.

Previously only available on bearings with an bore diameter of 25mm or less, the RSH seal has now been further developed and tested for use in bearings up to 60mm in bore diameter.

Users can specify SKF Explorer deep groove ball bearings with the new RSH seal installed on one or both sides, depending on the requirements of the end application. The new bearing variants are already being introduced, and the full range will be available worldwide by July 2017. The extended RSH offering joins a growing list of options and improvements in the SKF Explorer range. These include numerous different shield and seal configurations and a choice of cage materials and lubricants.

SKF Explorer was originally developed to take advantage of research into high purity steels with improved fatigue resistance, allowing the development of bearings with a longer rated life and lower friction. The SKF Explorer offering has been continuously extended and improved for more than two decades, with deep groove ball bearings joining the range 14 years ago. Since their introduction, SKF Explorer deep groove ball bearings have set the performance benchmark for the industry, with more than 4 billion bearings sold. SKF Explorer bearings are used in thousands of applications of around the world, from domestic goods to wind turbine generators

SKF is a leading global supplier of bearings, seals, mechatronics, lubrication systems, and services which include technical support, maintenance and reliability services, engineering consulting and training. SKF is represented in more than 130 countries and has around 17,000 distributor locations worldwide. Annual sales in 2016 were SEK 72 787 million and the number of employees was 44 868. www.skf.com

® SKF is a registered trademark of the SKF Group.

Britain at the Forefront of New Technologies

Industry 4.0 is clearly a revolution in the making, with wide-scale implications for businesses, consumers and workers. On the supply...

With the vision of making automation in industry a hands-on and enjoyable experience, Thomas Punzenberger founded Ing. Punzenberger COPA-DATA GmbH...

Emerson celebrates 10 years, 10 billion hours of industrial wireless operations around the world After a decade of pioneering wireless technologies...

Could Britain afford to lose 31.2 million working days? According to The Labour Force Survey, this figure illustrates the volume...

Asia-Pacific and EMEA will drive the high voltage circuit breakers market over the next four years, says GlobalData

The global market for high voltage circuit breakers (HVCBs) is set to grow at a compound annual growth rate (CAGR)...

Functional safety, a key current topic in the process automation industry, will be addressed on 29 April 2015 at a...

Plug and play in industrial plants

Contradictory to the common belief that technology necessary for Industry 4.0 is expensive, the Combine and Conquer report by Accenture...

A quarter of a century of trading and a successful partnership as an Atlas Copco distributor are being celebrated this...

Hubject, a global leader in electric vehicle (EV) charging interoperability and Plug&Charge technology capability, announced that Enel X has made...

MinerEye is launching a new, AI-powered governance and data protection solution, MinerEye Data TrackerTM that, for the first time, will...

Siemens Industry Automation has introduced an application that enables direct communication between an Apple iOS device (iPhone, iPad or iPod...

Baltimore Aircoil Company (BAC) will be showcasing the Vertex™ Evaporative Condenser and the TrilliumSeries™ Adiabatic Condenser at the 2019 IIAR...