–With a revamped user interface and improved engineering efficiency–

In the oil, natural gas, petrochemical, chemical, and other industries, the number of skilled operators continues to decline each year. As a result of the pressing need to train new operators, interest has grown in plant operator training systems. Omega Simulation’s OmegaLand integrated dynamic simulation environment enables the construction of virtual plant models that can be used not only for the training of plant operators but also for the study and verification of chemical processes and the design of new processes. Thanks to its ability to precisely reproduce plant operations based on the processes at actual plants, OmegaLand has won wide acclaim and has been a best seller around the world since its release in 2000. 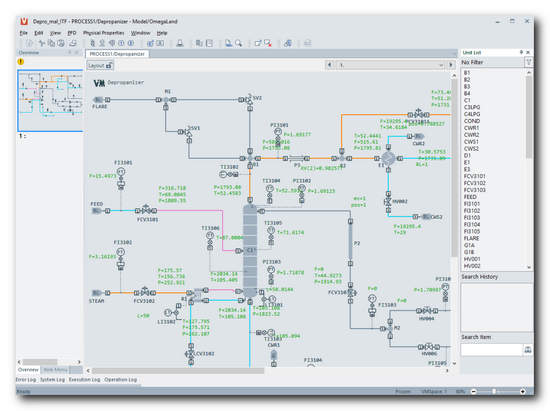 OmegaLand consists of the Visual Modeler plant dynamic simulator and a variety of functional modules including a graphic module for the on-screen display of plant operations and a simulation control module. With the assistance of an engineer, these modules can be combined to construct a system that meets the needs of each user.

With this latest release, the user interface has been updated so that each of the functional modules can be operated using the same integrated environment, thereby improving engineering efficiency. To ease the process of system engineering, three separate functional module packages are available.

The user interface has been updated to allow users to operate different functional modules using the same integrated environment. Previously, engineers had to launch multiple functional modules before they could carry out a task; with this new version, tasks can all be easily executed on a single screen. This eliminates the need to input data for each functional module, thereby reducing the likelihood of human error and thus improving the quality of the simulation system. Operability has also been improved by standardising screen design based on Windows® 7 and Windows® 10.

Previously, when building and tuning a virtual plant model to reproduce the behavior of a plant, engineers had to wait for the simulation to complete before modifying the program. With the new version, the simulation can be paused at any time if a problem is encountered with the model; once the program is modified, the simulation can be continued. In addition, the graphics and instruction functions have been modified to improve operability.

Oil and gas, petrochemicals, chemicals, electric power, and water treatment, and other industries

Omega Simulation Co., Ltd. was established in April 1997, bringing together Yokogawa’s plant control system know-how and Mitsui Chemicals’ process simulation technology. Yokogawa has an 85.1% stake in this company, with the remainder held by Mitsui Chemicals. The company is engaged in the development, sale, and maintenance of training simulators and software solutions for plant analysis, operation, and control.

Yokogawa's global network of 92 companies spans 59 countries. Founded in 1915, the US$3.7 billion company engages in cutting-edge research and innovation. Yokogawa is active in the industrial automation and control (IA), test and measurement, and aviation and other businesses segments. The IA segment plays a vital role in a wide range of industries including oil, chemicals, natural gas, power, iron and steel, pulp and paper, pharmaceuticals, and food. For more information about Yokogawa, please visit http://www.yokogawa.com

The European headquarters of Yokogawa were founded in Amersfoort in the Netherlands in 1982. Throughout Europe Yokogawa has its own sales, service and engineering operations. This dedicated network has been extended to Central and East Europe to further enhance the coverage and support associated with serving the process control and automation market place. Yokogawa develops and produces flowmeters at Rota Yokogawa in Germany and liquid analysers and industrial safety systems in the Netherlands. In addition to this dedicated network of Yokogawa subsidiaries, a select organisation of Test & Measurement (T&M) subsidiaries and distributors is established in certain areas to support the specific customer needs of this continuously developing and specific market of T&M instrumentation.

InfraTec presents the next high-end infrared camera for the mid infrared range with the ImageIR® 9500 A tremendous range of applications...

The technology company Continental has played a key role in shaping the history of drive belts and, in turn, the...

Protect your employees, equipment and the environment

To complete the strongest safety valve portfolio in the market, we now introduce a true spring-loaded safety valve: The Alfa...

Atlas Copco Compressors has appointed Heather Gallagher as Competence & Development Manager in the UK. In her new role, Heather...

MANN+HUMMEL presents a new sales tool at the ISH trade fair in Frankfurt: the eco16 filter app for air filters...

Continental sees digitalization and connectivity in construction vehicles as a crucial factor for the future of the industry. The technology...

Via its Agent in Sweden, Erichs Armatur AB, SIPOS Aktorik has supplied uninterruptible power supply (UPS) enabled actuators to the...

Rohde & Schwarz highlights its innovative 5G conformance solution for both FR1 and FR2, featuring the latest version of the...

Dr. Thomas Alt will support Ubimax in his function as a member of the advisory board in its strategic orientation...

As of 25 November, ÅF Pöyry is called AFRY. As part of our brand change, we are also enhancing our...