VTT has developed a solution for converting even small sources of methane-rich biogas into raw materials for animal feed or bioplastic on farms, landfills and wastewater treatment plants. This emission-reducing solution is based on the ability of methanotrophic bacteria to grow on methane in gas fermentors. 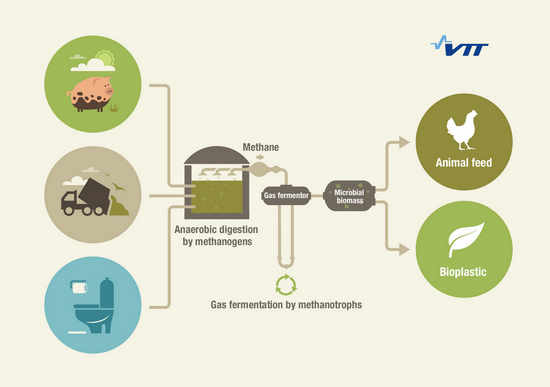 Methane-rich biogas is generated on farms, landfills and wastewater treatment plants in anaerobic digestion of biological material. Until now, the processing of such gas into biomethane has only been viable on large biogas-producing sites; small biogas sources such as farms have remained largely unexploited.

The method developed by VTT would reduce emissions, increase the use of biogas and improve protein self-sufficiency.

It is based on the ability of methanotrophic bacteria to grow in aerobic conditions in gas fermentors, using methane as the source for carbon and energy. The process is as follows: The methane gas generated by anaerobic digestion is fed into a gas fermentor. A growth medium containing the methanotrophic bacteria circulates through the pipes of the gas fermentor, creating a single-cell protein biomass with a protein content of around 60%. The cell mass is filtered, pasteurised and dried. 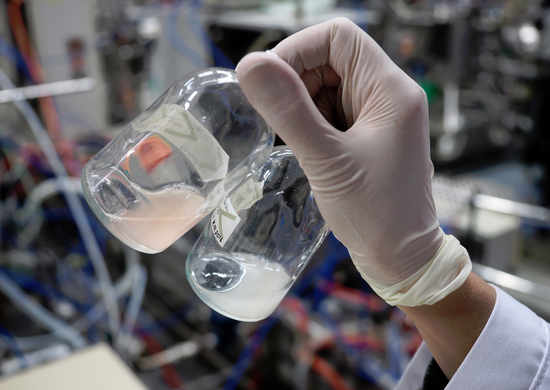 The methanotrophic bacteria and (depending on the growth conditions) cell mass may also contain polyhydroxybutyrate plastic (PHB) – a natural substance in the cells that enables them to store conserve energy. For example, PHB can be used as a raw material for biodegradable packaging material, instead of oil-based and non-biodegradable plastics such as polypropylene (PP). The cell mass may contain 50% half of the PHB, in which case the protein content is around 30%. Extraction is used to separate the PHB and protein fractions from the dried cell mass. 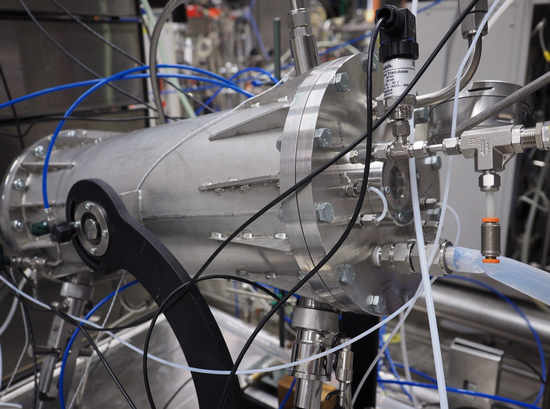 The production rate of VTT's method needs to be improved: a couple of years of development work lies ahead.  In addition, the protein fraction's suitability as a feed component needs to be tested.

Based on previous studies, single-cell proteins produced using micro-organisms can be substituted for ingredients such as meat, soya, egg whites or fish in food and feed. Finland is import-dependent with respect to soya: a fluctuating worldwide crop causes price fluctuations and uncertainty about the availability of this foodstuff. In Europe and Finland, attempts are being made to meet the challenge of protein feed for domesticated animals by improving protein self-sufficiency. This mainly involves promoting the production of vegetable protein. The production of single-cell proteins represents a good opportunity to improve our protein self-sufficiency.

Innovative engineering firm Aqua Cooling, based in Hampshire, has been honoured at a royal reception for winning the UK’s most...

Transformer energy performance standards being introduced all around the world are spurring transformer manufacturers, as well as their electrical steel,...

Designed to Meet Industry 4.0 Requirements GROB Systems, a global leader in the development of manufacturing systems and machine tools, announces...

Industrial processes across the globe require pumps to operate reliably and efficiently. The latest pump designs and coating technologies offer...

ENGINEERING ON RED CARPET Semta Skills Awards Backed By Biggest Brands Turn on the spotlights, dust off the red carpet – the...

VTT has developed a solution for converting even small sources of methane-rich biogas into raw materials for animal feed or...

COPA-DATA has been developing software for the industrial automation and energy sectors since 1987. The subsidiary COPA-DATA CEE/ME has made...

The process of identifying and managing energy demand was one of the first to adopt computer technology and the internet....

A.Celli and SINAMICS upgrade: stepping into the future!

Why migrating from SIMOVERT to SINAMICS will improve the safety and performance of your A.Celli plant. Starting in 1996, the Siemens...

Manufacturers speak out about uncertainty

MANN+HUMMEL presents bag filters with energy rating A+ and A

At the ISH trade fair in Frankfurt, MANN+HUMMEL presents a range of energy saving pocket filters in accordance with the...