Japanese electronics manufacturer Minebea expects to complete construction of its third factory in Cambodia by the end of the year, allowing the company to diversify its operations toward more value-added products, a company official stated

The expansion of the company’s Cambodian operations, which manufacture micro actuators and small motors at two existing factories inside the Phnom Penh Special Economic Zone (Phnom Penh SEZ), brings its total investment in the Kingdom to $100 million since 2011.

Tetsu Shiozaki, vice president of Minebea, said that the company would continue to invest in Cambodia once the factory was complete by bringing in specialised machinery to equip the new production line. He added that the new factory would give the manufacturer space to move further up the supply chain. 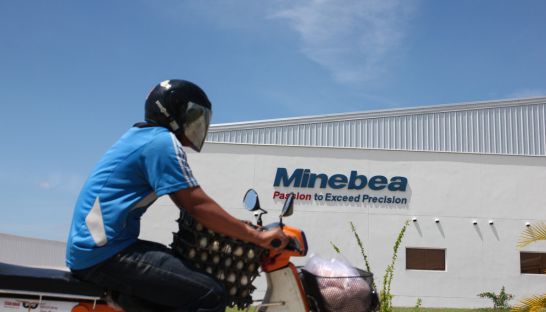 “We will start in-house precision parts production, which is a more valued-added process compared to assembly process,” he said.

He added that the completion of the third factory would bring Minebea’s total Cambodian labour force to 20,000.

The company currently employs about 5,300 workers, according to its website, or about a third of the total workforce in Phnom Penh SEZ.

While Cambodia’s industrial diversification has persistently been hindered by a low-skilled labour force, David Van, local managing director of the Bower Group Asia, said Minebea’s approach to training its own workers appears to be providing benefits.

“Minebea had no other option but to train their skilled manpower required,” he said. “Cambodia has never had such skills available to begin with, but they weighted their options and went for a long-term investment into their labour force and their well-thought out strategy seems to be paying off.”

When CETA was founded 30 years ago, a lot of companies had just begun to realize the importance of leak-testing...

E2S designs and manufactures high performance audible and visible signalling devices for use in industrial, marine and hazardous area applications....

The Micropilot FMR6x provides a small beam angle, measuring range to 410 feet and accuracy to ±1mm. Endress+Hauser introduces the...

"MatrikonOPC solutions were fast and easy to implement,and they've helped make our production process more efficient and our quality controls...

Beijer Electronics signs agreement with Otis worth more than 150 MSEK

Beijer Electronics has signed an agreement with Otis valued at more than 150 MSEK. Otis is part of the listed...

Manufacturers speak out about uncertainty

MANN+HUMMEL presents bag filters with energy rating A+ and A

At the ISH trade fair in Frankfurt, MANN+HUMMEL presents a range of energy saving pocket filters in accordance with the...