Toyota Motor Corporation has developed the world's first method for observing the behaviour of lithium ions (Li-ions) in an electrolyte when a Li-ion battery charges and discharges which can provide crucial research for future developments.

By using this method, it is possible to observe in real-time, the deviation of Li-ions, one of the causes of deterioration in the performance of Li-ion batteries, said a statement from the company.

Toyota believes that this will provide essential guidelines for research and development (R&D) that aims to improve the performance and durability of batteries, which would lead to longer battery life, as well as longer driving ranges for plug-in hybrid vehicles (PHVs) and electric vehicles (EVs), it said. 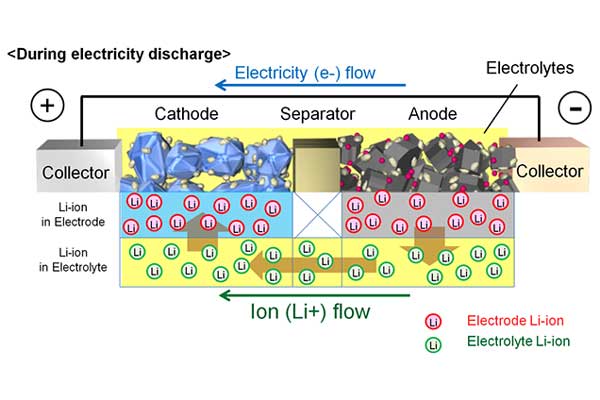 It has been known that Li-ion deviation occurs in the electrodes and electrolyte as a result of charging and discharging, and such deviation has been believed to limit the usage area of batteries, which is one factor that reduces the area in which the maximum performance of the battery can be achieved. When investigating the mechanism of Li-ion deviation, however, confirming the behavior of Li-ions in the electrolyte under the same environment and conditions as when it is being used in related products was not possible using existing methods.

Toyota Motor Corp said it aims to develop a more advanced electric-car battery "in a few years" that will allow the Japanese automaker to build vehicles with up to 15 per cent greater range and battery life than they have currently.

Using techniques developed in collaboration with a Japanese publicly-financed laboratory and four universities in Japan, Toyota engineers were able to better see in "real time" how lithium ions moved inside electrodes.

Going forward, Toyota will observe the behaviour of Li-ions caused by differences in the materials and structures of cathodes, anodes, separators, and electrolytes, as well as the differences in battery control.

The company will analyse the mechanisms that cause deterioration of battery performance and will lead to R&D that can help to improve the performance and durability of batteries, to bring about longer battery life and longer driving ranges, it stated.

Croatian packaging plant EcoCortec® was able to produce its EcoSonic VpCI®-125 Static Dissipative Bags in record time, in order to...

Landia has been awarded an important new turnkey contract in Scotland to supply pumping, mixing, ensiling and pasteurization equipment for...

The Ministry of Transportation of Azerbaijan with its new department “Baku Bus” has ordered 300 Iveco buses fitted with DIWA...

Gibbons Engineering Group and APT Powerdrive have joined forces to offer customers the best possible service on an extensive range...

Royal DSM, a global science-based company active in health, nutrition and materials, is partnering with Nexeo Solutions, a global chemical...

SKF is increasing its capacity to innovate by opening a new European Test Centre dedicated to high-speed aeronautical bearings. The new...

As a key member of the global photovoltaic industry, Trina Solar Limited ("Trina Solar" or the "company"), a global leader...

MULTIFUNCTIONAL STREET APPLICATION LAUNCHED IN ROTTERDAM With the launch of CENT-R, the Dutch city of Rotterdam and innovative developer Lightwell have...

A Leeds company is looking to cement its position as a world leader in the manufacture of electronic precision measuring...

~ How Industry 4.0 impacts globalisation ~ One of the earliest flights between two countries took place on January 7, 1785,...

Thanks to an increasing integration of communication devices in energy networks, as well as a growing understanding of component ageing...

ÅF has acquired Eitech’s automation business, thereby strengthening our range of services in the field of automation for industrial clients...