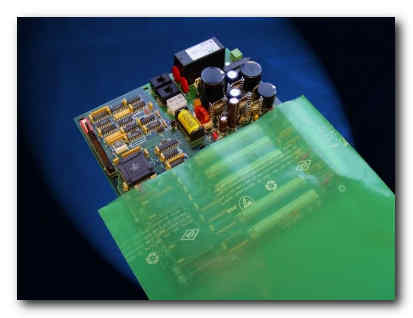 Film produced by EcoCortec’s VCI competitor failed standard ESD testing after company shipped VCI film to German global manufacturer without checking ESD properties. This could have caused huge damage to the manufacturer due to electrostatic discharge. Fortunately, the customer performed ESD testing upon receiving and rejected the whole lot.

VpCI®-125 bags were 100 pct tested for ESD and anti-corrosion properties before shipping. After they passed all the tests they were sent long with the certificates. EcoCortec®, the producer of highest quality packaging materials has always put its customers first and goes extra mile to satisfy its clients and meet their delivery window every time. This case is another example of its commitment to quality and excellence. The plant is the only VCI film producer in Europe that has a fully equipped ESD laboratory on its premises.

Multifunctional and recyclable VpCI®-125 Static Dissipative Film and Bags are one of the best selling plant's items due to their outstanding quality and properties. Bags are unique in their ability to prevent corrosion and ESD damage as well as combine effective multimetal corrosion protection with strong static dissipative properties.

Heat sealable film and bags are completely non-toxic and do not contain free amines, phosphates, silicones, or other harmful materials. They effectively protect components from electrostatic discharge. Environmentally safe VpCI®125 films and bags replace conventional preventatives such as oils and desiccants, allowing the product tobe used immediately without cleaning or degreasing.

Growing by more than 50% this year – much of it driven by manufacturers in Mexico and Latin America –...

Plug and play in industrial plants

Contradictory to the common belief that technology necessary for Industry 4.0 is expensive, the Combine and Conquer report by Accenture...

Mobile World Congress Americas 2018, which takes place in Los Angeles (September 12th-14th), will focus on key themes in the...

ATLAS Knowledge Group, a leading international provider of learning technology solutions has announced a new partnership with the prestigious Petroleum...

LDT Dosiertechnik GmbH celebrates its 25th anniversary this year of supplying liquid dosing pumps to the industry at large. In...

Atlas Copco Compressors has appointed Heather Gallagher as Competence & Development Manager in the UK. In her new role, Heather...

–Expanding business in the renewable energy, pharmaceutical, and food industries– Yokogawa Electric Corporation has announced its new subsidiary in Norway to...

Aftermarket support for thermal turbomachinery, which includes gas turbines, steam turbines and turbo compressors, is essential for continued reliability and...

iXblue launches the Phins Compact Family, offering a full range of INS for all AUV types