After a record-breaking exhibition last year, CWIEME Chicago returns in 2015 with even more exhibitors, set to attract thousands of electric motor, transformer, generator and other electrical manufacturing pros to the two-day event. 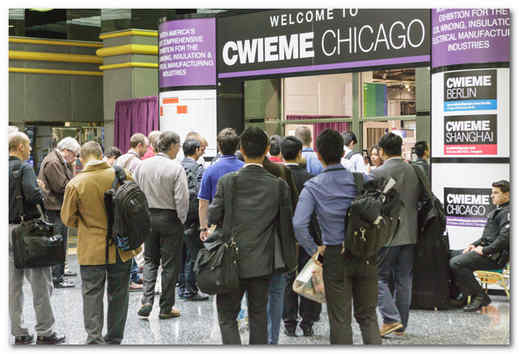 On October 6 and 7, CWIEME Chicago’s largest gathering of exhibitors from across the international coil winding, insulation and electrical manufacturing industries will meet at the Donald E. Stephens Convention Center in Rosemont, Ill. near O’Hare International Airport. Among the exhibitors, 57% will be North and Central American suppliers, while 27% will come from Asia and 16% from Europe. The show provides a valuable opportunity for visitors to network with domestic American suppliers and develop new relationships internationally.

“Our growing range and quality of exhibitors – encompassing all areas of the electric motor, transformer and generator manufacturing – will no doubt attract many visitors to this 7th edition of the show,” says Haf Cennydd, portfolio director for the CWIEME exhibition series. “Whether visitors are looking to meet with existing or new suppliers, keep up-to-date with the market, network or simply get ideas and inspiration, CWIEME Chicago is definitely the place to be in 2015.”

Visiting manufacturers of transformers, motors and electrical devices will be able to source many – if not all – the materials and components they require – from magnetic cores, wires, laminations and insulation materials, to winding equipment, and test and measurement systems.

Last year’s show attracted more than 1,300 visitors – 96% of which were in a position to authorize or recommend purchases. The largest group of attendees were design and production engineers (49%). Other visitors included senior management and procurement professionals with 52% coming from the automotive industry. The energy industry and consumer electronics industries were also strongly represented at 30% and 18% of attendees respectively.

Expert instruction will continue to be an integral part of CWIEME Chicago in 2015, with free seminars and workshops on subjects, such as the 2016 US efficiency regulation changes for electric motors and distribution transformers, growth trends and opportunities in North American manufacturing, the move towards electric motors and EV technology in the auto industry, additive manufacturing possibilities for the sector as well as a spotlight on talent from the next generation of electrical engineers.

Audience members will also hear from Sheng Yuan, winner of the CWIEME Challenge in Berlin earlier this year. PhD student Yuan was awarded the CWIEME Berlin Challenge prize for his innovative project to harvest magnetic field energy to power condition monitoring devices, such as partial discharge sensors and infrared detectors at electrical substations. His work has the potential to be industrialized in the very near future and his presentation will herald the launch of CWIEME Challenge 2016 in North America early next year.

“CWIEME Connect is such a valuable part of the show, rivalling that of many commercially-run conferences – and it’s entirely free. The content is specifically designed to fill potential audience knowledge gaps and help visitors discover solutions to technical issues and understand the industry issues of the day,” says Chloe Theobald, content manager for the CWIEME exhibition series.

“Interactivity is very important at the show,” says Haf Cennydd, portfolio director for the CWIEME exhibition series. “People can read product information anywhere, but where else can you see equipment in motion and directly compare it with competitor models?”

Another new feature, CWIEME Social, will provide a relaxed and friendly setting for visitors and exhibitors to network over drinks at 4:00 p.m. on the first day of the show. This free-to-attend event is a prime opportunity for visitors to meet the smaller exhibitors not hosting their own on-stand networking events at the show.

“A tradeshow, conference and networking event in one, CWIEME Chicago has grown year after year to become the busiest and most exciting meeting place for members of the North American coil winding, insulation and electrical manufacturing community,” concludes Cennydd. “We can’t wait to welcome both new and returning visitors to the Donald E. Stephens Convention Center this October.”

The importance of cutting-edge software

Industry 4.0: from talk to action The results of an Industry 4.0 study by PwC show that manufacturers intend to invest...

The future of transport is autonomous

Matthew Doude, associate director of the Center for Advanced Vehicular Systems at Mississippi State University, will speak about how autonomous...

Hubject, the global leader in electric vehicle charging interoperability, has just announced it is making it easier to connect to...

CADENAS awards the manufacturer's product catalog for linear units with the quality seal for an optimized offer of digital engineering...

Atlas Copco has announced a complete re-design of the stand-alone, retrofit energy recovery units for its GA compressors. The new...

Offering a mixing solution to meet any requirements in the hygienic industries, Alfa Laval ALTB agitator has been upgraded to...

ÅF appoints Malin Frenning as new Head of the Infrastructure Division and as a member of Group Management. Malin has...

Oil and gas service company, Tracerco, part of Johnson Matthey Plc, has received an Institute of Physics Award for Innovation...

Seeq customers can now work with a global network of partners to assure project success. Seeq Corporation is expanding its...