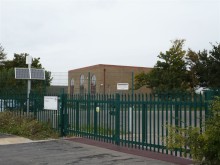 The O&O Up & Down barriers are perfect for operation from solar-power where a green solution is required or a mains supply is not readily available.  Often, providing power is the most expensive part of fitting an access control barrier, but the solar option allows security to be fitted to the most remote locations.  The standard solar panel will operate the barrier up to 100 times a day and can be upgraded to 950 operations – in a British winter!  The solar systems also assume each barrier will be fitted with a GSM intercom and exit loop as standard and are rated to cover this in the solar calculations.

“These solar-powered barrier systems add a completely new dimension to the UK security market.” said Managing Director, Neil Sampson.  “Having already proved their worth with clients such as BT, DHL and the NHS, they are perfect in remote or shared power locations and can be upgraded to suit even the busiest entrance.  Supplied with everything that’s required, including solar panels and a four year warranty, the kits are a massive cost saving when mains is more than 50 metres away.  We have continued our solar expertise into our range of solar gate automation with a section of ram and underground automation with 10 year warranties that can be operated up to 200 times, per winter day.”

For further information on the solar-powered barrier and gate kits, please see Green Gate Access System’s latest 2015 trade catalogue on the homepage of their website - http://www.solarbarriers.co.uk

Neil Sampson is the founder and Managing Director of Solar Gates UK Ltd, the Green Gate brand who provide solar and mains powered gates, barriers and access control systems throughout the UK.  Established in 2006, Neil, together with his wife, Hannah Sampson, have grown and developed the company into one of the most successful and respected firms within the industry, currently employing 10 staff, many of whom are locally based.

Since its inception, the company has grown 25% year on year and now works with a range of clients across both the domestic and commercial sector, such as architects, schools and local authorities, in addition to becoming the UK importer for the O&O range of automation.  In 2009, the company moved to its first commercial premises and in 2012, opened a showroom and training facility in Maidstone, Kent.

In June 2014, Neil was selected as Chairman of the ‘Powered Gate Group’, part of the Door and Hardware Federation.  The group was formed in response to requests from the Health & Safety Executive for an industry-wide trade body to develop higher standards of safety for automated gates.  The initiative followed a number of tragic accidents involving powered gates.

In April 2015, the company opened another office in Salisbury and are moving to larger office space in their Kent headquarters in July.

Green Gate Access Systems is an active supporter of several charities, including Soteria Trust, which runs a business school for under privileged youngsters in Nigeria, equipping them with UK recognised qualifications in business studies and accountancy; Redeeming our Communities, a UK based initiative to improve community cohesion; and the Princess Project, which assists young single mothers in the Maidstone area.

EV motors have lasted for over 100 years on boats and their design changed slowly. Now some last only a...

Mobile Electrics at Watts to Kilowatts without Batteries

Battery elimination, indeed elimination of all energy storage, is moving to even higher power, from electronics to electrical engineering. EnOcean...

Silvadata and MHG Systems start their cooperation on mobile services

Oy Silvadata Ab and MHG Systems have signed a cooperation agreement on the development and marketing of mobile applications for forest...

In addition to classic automation projects at field level, the demand for scalable solutions that offer connectivity from the sensor...

The Shield Group, the UK’s largest independent Total Security Solutions (TSS) company, has reported a 400% increase in orders from...

Stora Enso has signed strategic partnership agreements with three of the leading technical universities in Sweden and Finland. The aim...

ÅF Pöyry acquires CTT Systems’ electronic unit in Gustavsberg, Sweden. Through the acquisition, the company strengthens its offer within product...

KVM - an investment in the future

... or why the seamless integration of IT with the broadcast world is essential Guntermann & Drunck GmbH will be exhibiting...

Mitsubishi Electric a global, leading green technology company, has reaffirmed their commitment to Ireland with the announcement of a multi-million...

Agricultural robots and drones to become a $45Bn industry by 2038

Robotic technology is quietly transforming the world of agriculture. In this article, we describe how this market will plausibly grow...

DLM3000 features improved precision and productivity from a compact package with interactive touch-screen display The new Yokogawa DLM3000 is the first...

In electric vehicles, China is not what it used to be. Electric bike demand collapsed five years ago, and electric...