A new design for SIPOS Aktorik’s electric actuators will be launched in December 2014. The development, which is the most significant announcement for the company since the launch of the SIPOS 5 in 1999, features a number of advancements that will benefit valve control applications. 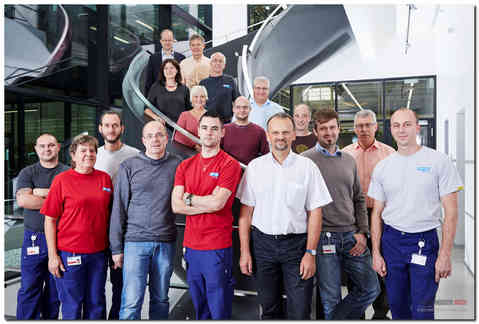 SIPOS, which is renowned for its pioneering actuation innovations including variable speed technology to address water hammer, reveals that three years of R&D and intensive tests have been invested in the evolution in electric actuation.

Leading experts in the field of actuation have contributed to the advancement including Matthias Rebhan, whose track record includes work as an R&D engineer with Siemens and who gained a doctorate in Electrical Engineering in 1987. Giving an insight into the announcement, Dr. Rebhan, General Manager of SIPOS Aktorik said:

“We have used the brightest brains in the actuation industry, talked to our customers around the world and listened to our suppliers to evolve our devices. Full details will be revealed in December, but we can assure all parties involved in valve actuation, including operators and end-users; contractors and valve companies plus designers and specifiers that this marks a new era in actuation.”

Dr. Rebhan achieved a diploma (Dipl.-Ing) in Electrical Engineering at Erlangen-Nuremberg University, Germany. He started his professional career in 1987 as an R&D engineer with Siemens. He initially worked in the field of digital

real-time simulation and gained a doctorate (Dr.–Ing.) in Electrical Engineering at Braunschweig Technical University based on this work. Subsequently he worked in software / electronics development for frequency converters. At SIPOS Aktorik, Dr. Rebhan has been influential in achieving variable-speed capabilities in electric actuators: since 2001, he has been at the helm of the company.

Advanced pump analytics platform recognized for its innovative integration of IoT into existing operations Sulzer will be joining other leading high-tech...

Nuuka has signed a new agreement with a big Swedish supermarket chain to install their technology in a further +50 buildings.

It was announced in January that ICA Real Estate would use Nuuka’s software in pilot-projects to monitor, analyze and improve...

SKF is increasing its capacity to innovate by opening a new European Test Centre dedicated to high-speed aeronautical bearings. The new...

Senseye, the scalable predictive maintenance leader, is excited to announce that it will be giving live demonstrations of its ground-breaking...

Fast and cost effective cleaning Saving time and water are some of the KPIs which have the most attention in the...

Semcon is launching a new collaborative venture with XMReality to enhance the user experience of product information with the help...

India remains a key growth market for OMNOVA's specialty polymer latices and resins In order to put greater focus on its...

Ashtead Technology, a market-leader in the rental of specialist marine equipment, has seen a sharp increase in equipment sales since...

Seminar and workshop from ABB Robotics to provide a straightforward look at how to assess the potential for robotic automation...

COPA-DATA will attend SPS IPC Drives in Nuremberg, Germany from November 28-30. Joined by eight partners, the company will be...

ANDRITZ and TeamTec have signed a cooperation agreement for worldwide marketing of the SeaSOx exhaust gas cleaning system for the...

Cind, using technology from the defence and security company Saab, has entered into an agreement with BillerudKorsnäs for the measuring...