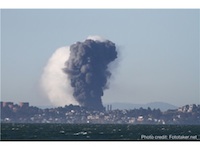 Pipeline corrosion has moved back up the process safety agenda after the US Chemical Safety Board (CSB) identified the issue as a key factor in the vapor cloud release and massive fire that occurred at the Chevron refinery on 6 August, 2012.

A CSB investigation team concluded that Chevron had, for 10 years, failed to effectively apply inherently safer design principles and upgrade piping in its crude oil processing unit that was extremely corroded and ultimately ruptured to cause a release of hydrocarbons that endangered 19 workers and caused a major fire.

It is already well known that fouling and corrosion can threaten the reliability and safety of critical atmospheric fractionator overhead condensing systems. These problems often can impair production, raise maintenance costs and reduce profits.

Meanwhile, another driver behind the need for greater corrosion control is a push by refiners around the world turn to lower-cost "opportunity" crude oil feedstocks and aim to maximize middle distillate production.

Among the companies responding to these issues is GE, which has introduced TrueSense for Process, an online crude overhead monitoring system (COMS) that continuously monitors, applies and optimises the delivery of chemicals into the crude process stream to control corrosion.

Episodic pH variations in the overhead of the crude unit that are measured in the condensate water are often missed. This is mainly because spot testing is performed manually due to the lack of online, reliable data-gathering devices that can make adjustments to corrosion control chemistry in real time.

Semcon expands the partnership with fuel cell company Powercell with a view to upscale the company’s production of fuel cells...

On September 30, BASF acquired a majority share of the internet platform UBench with offices in Turnhout and Geel, Belgium....

Bringing together all the latest technology

A strong network between IT and mechanical and electrical engineering is needed so that well informed, knowledgeable decisions can be...

Power management company Eaton, a Warwick based manufacturer of Screw in Cartridge Valves and Hydraulic Integrated Circuits, has won national...

ANDRITZ AUTOMATION, part of international technology Group ANDRITZ, has received an order from Compass Minerals® to supply the electrical distribution...

Which automotive drive system will become dominant in future? How can we achieve further reductions in energy consumption and emissions...

After the successful launch of the AUMA Support App for Apple devices earlier this year, the electric actuator manufacturer now...

Toyota Motor Corporation has developed the world's first method for observing the behaviour of lithium ions (Li-ions) in an electrolyte...