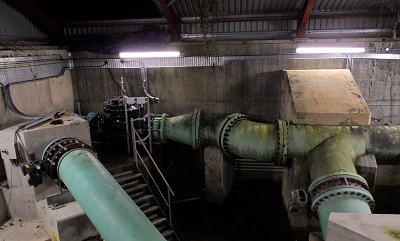 Dŵr Cymru Welsh Water investigations of ‘pin holes’ by non-destructive testing of a strategic flow control valve found that in less than five years, cavitation had caused extensive detrimental and potentially fatal wear to the plug valve, which was in danger of imminent failure.

If this have failed completely, the Pontsticill water treatment works near Merthyr Tydfil  would have flooded and reinstatement would probably have taken several days, placing 70,000 customers at risk of losing supply.

Although there was a replacement plug valve on hand, Dŵr Cymru Welsh Water sought advice from Industrial Valves’ technical specialists (IVL Flow Control) as to the suitability of this type of valve in this environment.

On studying the available data it was proved that the pressure differentials present could not be handled by this type of plug valve, and it would inevitably lead to a repeat of the cavitation problems and another potential loss-of-supply situation. IVL recommended a series 300, 600mm EOV control valve as an alternative, along with a technical assessment which Dwr Cymru Welsh Water were happy to accept.

The difficult replacement was carried out overnight, and the removal of the existing valve and re-installation of the new valve was achieved within an eight hour overnight shutdown period between 8pm and 4am, with IVL’s engineers on hand to assist.

IVL Flow Control’s director Craig Stanners said:  “Thankfully this type of work goes unnoticed by the general public, but when dealing with such large volumes of water from a health and safety and water quality point of view, the planning and effort that goes into ensuring a smooth transition has to be absolutely meticulous”.

He added:  “This was a great example of teams working together to protect essential services and an excellent example of a positive intervention that will benefit both customers and the company”.

The new 600mm control valve is already showing that it is resistant to cavitation at Pontsticill WTW, performing within an accuracy of ±0.5% and controlling flows from 0ML/d (closed) up to around 95ML/d.

Furthermore, in this situation the new control valve will have a lifetime of 20-30 years, when serviced and maintained regularly.

Chris Holloway, production asset engineer at Dŵr Cymru Welsh Water, added:  “We had noticed a problem with the old valve when we were carrying out regular checks of the raw water valve.  There was water spraying out of very small holes in the valve body.  When it came to changing the valve (and the capital team told us they were going to change the type of valve), I was a bit concerned that that the operation of it would change and we would not be able to restart the works in the way we normally would”.

He continued:  “On the night after the new valve was installed and everything was ready to go we decided to try to bring on the works using the normal method, where we have to bring the flow on very quickly for the first 40mld to make sure the DAFs get a decent flow to start with. I was surprised that the flow came on so smoothly and did exactly what I was hoping it would do. All changes following this were much smoother than we were getting with the old valve.

“Since the install of the new valve we have noticed that the changes to the flow required by network and the high lift pumps (which can be as much as 20mld at any one time) have been a lot smoother than before.  The control of the chemicals, which are flow-paced from the front-end has also improved enormously”.