A total of 18 planned and announced Floating Production Storage and Offloading (FPSO) projects are expected to be deployed offshore Brazil during the outlook period 2020–2025, the highest among the countries globally, according to GlobalData, a leading data and analytics company.

Among the 18 upcoming FPSO’s to be deployed in Brazil by 2025, eight are planned with identified development plans while nine are early-stage announced FPSOs that are undergoing conceptual studies and may be approved for development. Petroleo Brasileiro SA (Petrobras), the state-owned company of Brazil, leads the operators’ list with seven FPSOs.

Haseeb Ahmed, Oil & Gas Analyst at GlobalData, comments: “In Brazil, the announced FPSO for the Carcara field is expected to have the highest crude oil production capacity during the outlook period with 220 mbd, followed by FPSOs for Mero 4, Mero 3, Mero 2, Guanabara MV31 and Carioca MV30 with 180 mbd each by 2025.” 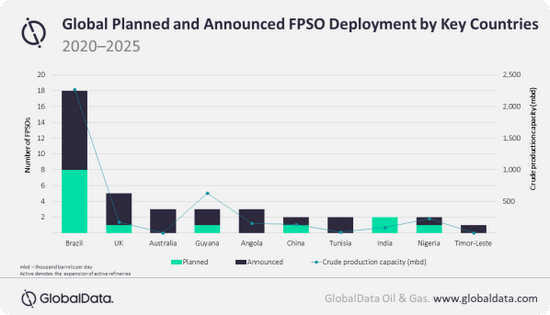 GlobalData identifies the UK as the second highest country globally with five upcoming FPSOs by 2025. Four of the upcoming FPSOs in the country are announced FPSOs. Rosebank, the announced FPSO operated by Equinor UK Ltd, has a crude oil production capacity of 100 mbd, while Penguins, the sole planned FPSO in the country, is expected to have a capacity of 45 mbd during the outlook period.

Australia, Guyana and Angola follow next with the deployment of three FPSOs each. While all the three deployments of Australia and Angola are announced projects, Guyana has two announced and one planned project during the outlook period. The top five countries are expected to contribute more than three quarters of global crude production capacity through FPSOs by 2025.