A key player in Aberdeen’s marine support scene has added a tenth boat to its growing fleet of workboat vessels. McLachlan Marine has acquired the 26-metre-long ‘Ocean Titan', a windfarm support vessel capable of 28 knots and MCA certified up to 60 nautical miles offshore, allowing them to offer faster support further out to sea.

The substantial investment of more than £1 million follows a decade of rapid growth for the independently-operated McLachlan Marine, which was established in 2011 and recently dubbed the ‘Swiss army knife of workboat operators’. Having doubled its turnover every year, the company has a quayside base and berthing in Aberdeen Harbour, warehouse and workshop headquarters in Fordoun, and an additional office in Montrose. 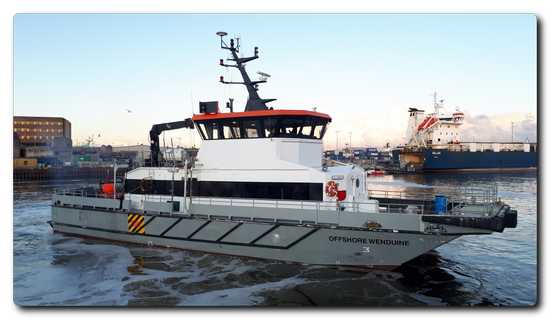 Owner and Managing Director, Ruari McLachlan, said: “We purchased the first boat in 2011 with a 10 year work history and have added a further nine since then to meet the growing demand across the renewables, offshore wind and oil and gas sectors. We have a range of boats from catamarans to smaller safety vessels, each one offering a distinct service, from crew transfers to seabed surveys.”

None can match the versatility of Ocean Titan however, as Ruari explains: “Powered by two water jet propulsion systems which allow for rapid acceleration and increased manoeuvrability, Offshore Wenduine can go further and faster than our other vessels. With a cargo capacity of 15 tonnes and large cargo space at the bow and stern, she can accommodate a 20-foot container, or a launch and recovery system for ROV deployment. She also has an automated custom built survey pole with a winch, and a tugboat arrangement – the sheer adaptability of Ocean Titan makes her a real game-changer for marine support across the north east coast of Scotland.”

Ruari retains a hands-on role in the company, being involved in day-to-day operations and project management, as well as overseeing a 30-strong staff during peak season. The team has a wide-ranging background in offshore wind, oil and gas, renewables and maritime training: “The breadth of our team’s experience across various sectors coupled with the size and variety of our fleet has stood us in good stead to offer reliable, comprehensive support to clients over the years,” he continues. “But the industry is changing, with larger vessels coming on the scene, and an increasing focus on safety - the acquisition of Ocean Titan was very much in response to this, and will ensure we can continue to be a safe and strategic partner for clients into the next decade.”

Established in 2011 and strategically located between Aberdeen and Dundee, McLachlan Marine owns and operates a growing fleet of 10 marine support vessels for the offshore wind and oil and gas sectors.

With a diverse profile of projects, services and a quayside base at Aberdeen Harbour we providecrew launch, crew transfers, workboat hire, safety boats, seabed survey boats, equipment sea trials and equipment deployments, the company provides the highest levels of service, with an overriding focus on safety

Designed and built to the highest standards, their expanding fleet and variety of vessels ensures they can offer the right vessel for each project.