Midas Gold Corp. has just announced that the U.S. Forest Service’s (“USFS”) had released the Draft Environmental Impact Statement (“DEIS”) on the Stibnite Gold Project (“Project”) for public comment. Individuals will have 60 days to comment on the proposed redevelopment and restoration of the former Stibnite gold, silver, antimony and tungsten mine, which is located in Valley County, Idaho. The comment period is legally required to be 45 days and the USFS has decided to grant a 15-day extension. In addition to producing gold and silver, the Stibnite Gold Project would produce the only domestically mined source of the critical mineral antimony in the United States, invest approximately $1 billion in construction, provide approximately 500 direct, family wage jobs for Idahoans as well as numerous indirect jobs in the supply, services and contracting sectors, address numerous legacy mining issues affecting the environment and reconnect migrating salmon to their native spawning grounds for the first time in more than 80 years. 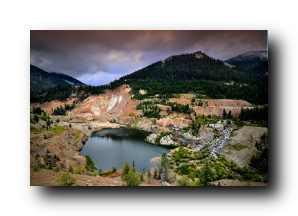 “We are one step closer to recognizing the full benefits of the Stibnite Gold Project,” said Stephen Quin, CEO of Midas Gold Corp. “Our company has worked hard for the last decade to design and permit a mining project that could redevelop and restore an abandoned brownfields site and have a positive economic impact on the local community and Idaho in general. We have carefully developed an approach to use the proceeds of mining to restore fish passage and habitat, address numerous legacy environmental impacts and improve water quality in the region. If permitted, we will bring hundreds of well-paying jobs to rural Idaho and invest hundreds of millions of dollars in the state. We encourage community members to write to regulators and let them know why they support the Stibnite Gold Project, if they want to see all of this happen.”

Midas Gold designed the Stibnite Gold Project to integrate responsible, modern mining with the restoration of legacy and new disturbances. At first glance of the extensive DEIS released today, readers should note that the Executive Summary prepared by the U.S. Forest Service only summarizes the impacts of proposed mining. The reader should look to the rest of the document and Appendix D to see the holistic impact analysis with the voluntary and required mitigation proposed for the various resources incorporated.

The project has strong support in Idaho, with more than 1,000 people signed up as members of the Support Stibnite Coalition, most of them Idaho residents.

“I have lived in Idaho since I was 17,” said Willie Sullivan, co-chair of the Support Stibnite Coalition. “I have memories of the old mining operations up at Stibnite, having roamed there as a child, and I have fond memories of hunting and fishing in the area as a child. If you’ve been to the site, you know it is a mess and needs to be cleaned up. I support Midas Gold’s plans to use modern mining to restore the site because I want my grandchildren to see this area cleaned up. Plus, the project will be a boon for our economy and provide jobs to many families in our region.”

Individuals who wish to view the document or comment on the Project can visit www.RestoreTheSite.com. Additional information about the Project and Midas Gold’s plans for site restoration, redevelopment of mining operations, reconnecting salmon to their spawning grounds, protecting the environment, jobs, and producing the critical mineral antimony, can be found at www.midasgoldidaho.com/news/deis-released/. Comments on the DEIS are due by October 13, 2020.

Midas Gold has been studying the Stibnite Gold Project for the past decade. During this time, the company has worked closely with regulators to provide all of the information they needed to conduct a comprehensive review of the project. Under the National Environmental Protection Act (“NEPA”), regulators need to ensure they meet the regulatory requirements to support a robust and defensible Record of Decision.

Midas Gold has delivered more than 80 reports totaling 27,522 pages of scientific data and analysis to the 11 federal, state and local agencies reviewing the Project. These documents included baseline studies, technical reports, scientific modeling data and other supporting information. During the review process, regulators made 114 requests for additional information (“RFAI”) and 22 additional requests for clarifications (“RFC”) in order to evaluate the thoroughness of the environmental impact analysis. Midas Gold responded to all of these requests with additional data and analysis to aid regulators in their careful consideration of the proposed plan and various alternative development scenarios.

About Midas Gold and the Stibnite Gold Project

Midas Gold Corp., through its wholly owned subsidiaries, is focused on the exploration and, if warranted, site restoration and redevelopment of gold-antimony-silver deposits in the Stibnite-Yellow Pine district of central Idaho that are encompassed by the Stibnite Gold Project.