Despite possessing some of the largest uranium resources in the world, globally unstable prices and state-wide regulatory impediments have prevented the Australian industry from reaching its full potential. Now, miners are beginning to back its recovery as demand picks up and inventory falls. So what does the future hold for Australia’s uranium sector? GlobalData takes a look.

Global Data’s mining technology writer Scarlett Evans says: “The global uranium market has been relatively uncertain in recent years. A recent report released by the World Nuclear Association (WNA) said that an oversaturated market led to a general decline in production, reducing globally from 62,200 tonnes in 2016 to 53,500 tonnes in 2018. Prices have also been seen to drop from a January 2019 average of $28.90 a pound to $25.30 a pound in August. 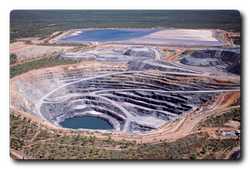 The Ranger uranium mine - Image source: Getty Images“However, the same report found a change in global policies is marking a favourable return for the material, a shift many hope will be echoed in Australia. With a history of regulations blocking the use of nuclear power, the Minerals Council Australia (MCA) has this year revitalised the debate over utilising this resource, and mining company Boss Resources has recently unveiled plans to revive their South Australian Honeymoon project. While the benefits of harnessing nuclear remains contested, there is a sense that change is beginning to be seen.”

Ian Hore-Lacy, senior advisor at the World Nuclear Association, told GlobalData: “The current state of nuclear power in Australia is zero. There is none and there are no immediate prospects of any.

“However, quite apart from that, there is widespread support for uranium mining and export, and that has been ongoing really since the Fox enquiry in the 1970s.”

GlobalData’s Evans concludes: “It would seem such calls are beginning to be heard, with a number of legal developments in the country over the past decade. Commonwealth support for uranium mining, the lifting of bans on uranium mining in Western Australia and Queensland, and the New South Wales Government’s repeal of the ban on uranium exploration have sparked optimism amongst industry members. Public support for nuclear energy has also been found to be on the rise, with recent surveys showing a majority of Australians support a role for nuclear in the nation’s energy mix.”

4,000 of the world’s largest companies, including over 70% of FTSE 100 and 60% of Fortune 100 companies, make timelier and better business decisions thanks to GlobalData’s unique data, expert analysis and innovative solutions, all in one platform. GlobalData’s mission is to help our clients decode the future to be more successful and innovative across a range of industries, including the healthcare, consumer, retail, financial, technology and professional services sectors.