Swiss high tech firm, SELFRAG AG has developed a unique technology, centred on high voltage pulse power that is aimed at revolutionizing the comminution process within the mining industry. SELFRAG has already sold a number of batch units to institutes around the world, including the globally-renowned Julius Kruttschnitt Mineral Research Centre (JKMRC) in Australia, and is now in the process of developing an industrialized continuous system for mining applications. 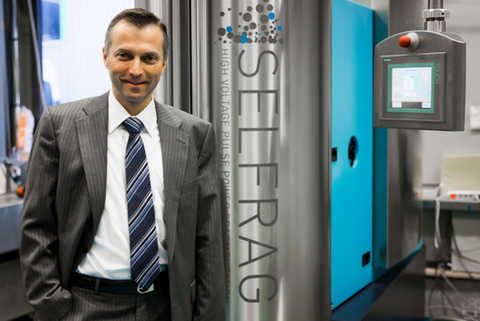 The benefits of being selective

The SELFRAG method has two major advantages over conventional comminution. Firstly, the interaction between minerals and the induced electrical and mechanical stress fields inside a rock matrix is highly selective. This makes SELFRAG’s high voltage fragmentation exceptional at liberating minerals – ores treated using between 1 and 10 kWh/t are generally liberated both coarser and more selectively. This has been shown to improve concentrate quality for nickel and copper ores. Alternatively, this improved liberation may be used to increase the grind size of an ore, which could represent a considerable energy saving. SELFRAG’s Lab system, sold to geology and mining institutes, has proven successful in liberating zircons and other minerals for dating of rocks.

The second advantage is the ability to weaken rocks using small energy inputs; energy inputs of 1 to 4 kWh/t, have typically given weakening values of up to 160% (based on an increase in A*b values (see Figure 1) and Bond work reductions in the range of approximately 5% to 20%. JKSimMet simulations have demonstrated that these strength reductions can result in significant overall energy savings. In the case of a SABC circuit with two ball mills, power draw of the SAG mill was kept constant to produce a finer product from the weakened feed; this change in the circuit power balance was sufficient to allow shutdown of one of two ball mills, resulting in significant power savings as well as considerable reductions in other costs such as grinding media and liners (see Figure 2). 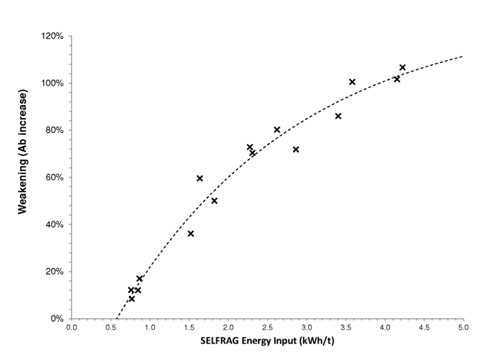 “At SELFRAG we currently have a pilot plant capable of processing up to three tonnes per hour,” explains CEO, Frédéric von der Weid. “We have been using this plant for internal development, as well as processing of bulk samples for mining and exploration companies. In the last six months, third party projects have included platinum, copper/gold and silver applications. We have also already completed engineering work on a modular 10 tph pilot unit; this modular design represents a scalable concept allowing for throughputs of 100 tph or more to be reached.” SELFRAG also offers services in high voltage characterisation of ores to the mining industry.

In addition to mining applications, SELFRAG is also actively developing exploration solutions for the diamond market, machines for the recycling of a wide variety of feed stocks, and units suitable for ultra-high purity fragmentation applications such as silicon rod crushing.

SELFRAG’s batch Lab unit is already installed in over 20 institutes around the globe, including in Australia, Japan, China, North America, and Brazil.

SELFRAG AG specialises in the development, engineering and marketing of high voltage pulse power products, plants and systems for the selective fragmentation of solids in the mining, recycling and solar industries. Founded in 2007, the company is headquartered in Kerzers in the canton of Fribourg, Switzerland and currently employs 30 staff. Privately held, investors include Affentranger Associates, Ammann Group, Credit Suisse and the Swiss Helvetia Fund.