The Danish company DIN Forsyning and KPA Unicon have signed a contract for the turnkey delivery of a district heating plant in Esbjerg, Denmark. The combined capacity of the Unicon Renefluid bubbling fluidized bed (BFB) and the Unicon Condenser flue gas scrubber will be 60 MW. The boiler plant will produce heat for the local district heating network for nearly 100 000 inhabitants and will use wood chips as fuel. The plant will start its operation in January 2023.

The boiler plant will be located in the port area of Esbjerg. The plant delivered by KPA Unicon is a significant part of a bigger plan, where three de-centralized heat production units are planned to be constructed to the same site for the purpose of replacing the existing coal-fired power plant. DIN Forsyning’s strategic goal is to utilize only fossil free fuels by year 2030 and Unicon Renefluid boiler plant is an important step to reach the set target.

”The local Combined Heat and Power station (CHP) is to be shut down in April 2023 and DIN Forsyning is obliged to find an environmentally sustainable replacement for up to 350 MW of district heating, we received from the CHP. We are pleased to have signed the contract for the boiler plant from KPA Unicon. We will use their expertise in this important process of replacing coal with a greener alternative,” says Kenneth Jørgensen, Leading Project Director in DIN Forsyning. 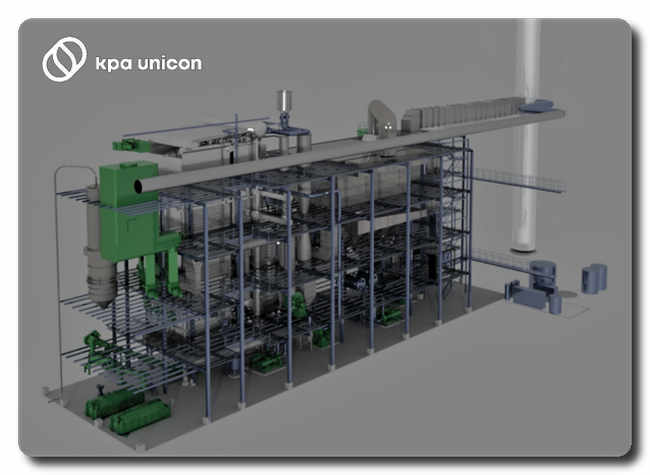 “It is great that we will deliver our first plant to Denmarks and thus be involved in taking the country towards a carbon-neutral future. The plant will be the best available technology in terms of efficiency, emissions and availability. The long service agreement is also very well in line with our development in the Scandinavian market area,” says Ada Herranen, Project Development Manager, KPA Unicon.

The delivery is extensive, including the Unicon Renefluid boiler with its main equipment, water treatment plant, fuel and ash handling equipment. The supplied Unicon Condenser flue gas scrubber enables high plant efficiency. The customer emphasizes the importance of zero discharge of wastewater and the plant will be designed to fulfill the request. Local emissions from the plant, such as dust, sulfur oxides and nitrogen oxides, are very low thanks to the supplied bag filter and SCR equipment.

Stable and secure remote operation of the plant is enabled on KPA Unicon's PlantSys digital service platform. In addition, a five-year maintenance agreement has been signed with the customer, which covers 24/7 technical support and annual maintenance of the plant. The customer will be responsible for the plant building and the fuel storage.

DIN Forsyning
DIN Forsyning is a multi-utility company within the markets of water supply, wastewater purification, district heating, household waste and recycling.
The company has 230 employees, is owned by the municipality of Esbjerg and Varde and the head office is based in the town of Esbjerg in Denmark.
Every year DIN Forsyning produce and distribute about 8.6 million liters of drinking water, transport and treat 23 million m3 wastewater, handle 45,000 tons of waste and supply approximately 1000 MWh district heating from waste incineration and CHP to our customers in the municipalities of Varde and Esbjerg. https://fremtidensfjernvarme.dk/

KPA Unicon
KPA Unicon is a Finnish family-owned company, which has been a strong advocate of clean, renewable energy since 1990. KPA Unicon creates and implements clean energy solutions around the world. It renews existing production systems with technologies utilizing renewable energy sources and equips energy producers with innovative digital tools. The company aims to lead the debate on clean energy, and to take initiatives that produce value to its partners. The company's headquarter is in Pieksämäki, Finland and it employs approximately 230 energy professionals in eight different countries.
www.kpaunicon.com