Imagine the environmental benefits if we could all simply paint solar cells onto the roof of our houses, or onto any surface for that matter. We could do this using perovskite solar cells (PSC), but, due to their instability, they have not yet been widely introduced. Now, researchers from the Graphene Flagship have developed hybrids of graphene and molybdenum disulphide quantum dots to stabilise PSCs.

Progress in PSCs means that they are primed to become an affordable and flexible solar cell option for smart, low-intensity applications. This is because PSCs are less complex to produce, are made with cheaper materials and, due to their flexibility, can be used in locations where traditional silicon solar cells cannot be placed. 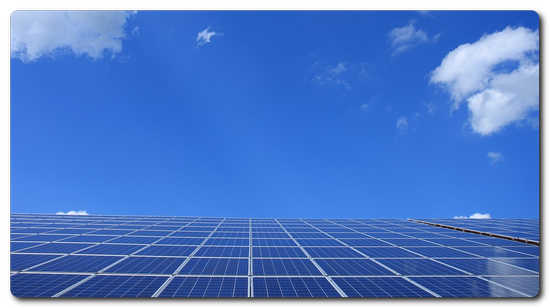 A collaboration between the Flagship Partners Istituto Italiano di Technologia, University of Rome Tor Vergata, and BeDimensional resulted in a novel approach based on graphene and related materials to stabilize PSCs.

PSCs are improving fast. When they were first developed in 2009, they had an initial efficiency of 3.8%. Today, they can achieve efficiencies above 22%. In comparison, silicon solar cells have been around since 1880, only reaching efficiency levels of 26.1% in 2018.

The main weakness of PSCs is their stability. This is where the molybdenum disulphide quantum dot/graphene hybrids come into play. The collaboration between research institutions and industrial partners enabled by Graphene Flagship, yielded a GRM based ink. Layering this over the PSCs saw them drastically increase the stability.

Graphene was central, as molybdenum disulphide was anchored to reduced graphene oxide. This allowed for both materials’ properties to be applied and the ink not only increased the stability but also the performance of the PSC.

“The Graphene Flagship was central to this development,” explained Professor Emanuel Kymakis, work package deputy leader for energy generation. “The funding and structure that they put in place were key to allowing new research teams to take part, such as the University of Rome Tor Vergata.

“Thanks to this research, we have overcome a major hurdle to adopting this new technology,” continued Professor Kymakis. “With the new levels of stability and performance, we could see the mass adoption of PSCs in the next few years.”

Once the PSCs stability is solved, attention can focus on scaling up production. Manufacturing PSCs requires solution processing, that can be ramped up to an industrial scale. Due to the flexibility, PSCs can be applied to nearly any surface and produce electricity.

Stable PSCs could change the way we power our homes and devices, as every available surface could be made to generate electricity.

Andrea C. Ferrari, Science and Technology Officer of the Graphene Flagship and Chair of its Management Panel added: "the potential of graphene and related materials to improve solar cells has been recognized since the beginning of the Flagship. Their combination with the emerging field of perovskite solar cells now allows a crucial step forward in stability. This validates the major investments in spearhead projects on solar cells done by the Flagship.”

About: The Graphene Flagship

The Graphene Flagship is one of the largest research projects funded by the European Commission. With a budget of €1 billion over 10 years, it represents a new form of joint, coordinated research, forming Europe's biggest ever research initiative. The Flagship is tasked with bringing together academic and industrial researchers to take graphene from academic laboratories into European society, thus generating economic growth, new jobs and new opportunities.