With the coal power sector in India struggling for the last few years, the Indian government has proposed carbon tax waiver on coal which may pose significant risk to India's renewable energy sector growth, says GlobalData, a leading data and analytics company.

The waiver is an attempt to help finance pollution curbing equipment and alleviate significant debt levels in the power industry. As per the proposal, a waiver of INR400 rupees/ton (US$5.61) of carbon tax would be given on the production and import of coal in India. The waiver would help project proponents of coal-fired plants to install pollution curbing equipment that would cut the emissions of sulfur dioxides.

Mohit Prasad, Project Manager at GlobalData, comments: “The power sector in India is mainly driven by non-renewable energy sector with coal contributing more than 55% of the country’s installed capacity. The waiver in carbon tax is likely to have a negative impact on the growth of renewable energy. The coal-based power sector, which had witnessed cancellations of projects and competitions from renewable sources after the cost of renewables in India, fell below that of coal, and gas-based power will now regain momentum.”

As per GlobalData, the annual installations of coal-fired plants have dipped starting 2016 and the declining trend has continued till 2018. During the same period, however, solar PV installations have increased significantly, mainly driven by competitive auctions. 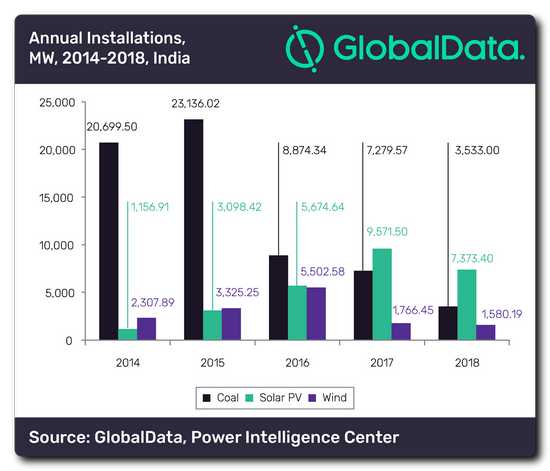 Prasad continues: “The proposed waiver has been announced at a time when most of the renewable energy auctions in India are getting undersubscribed. The fall in tariffs under the auction mechanism has been putting pressure on the margins of project developers, thereby reducing the economic feasibility of project pipeline in renewable energy sector. This is manifesting itself in the under-subscription of the auctions seen in recent times.”

Furthermore, one of the major technical challenges with renewable energy is intermittency, resulting in low utilization of transmission infrastructure. Hence, the Ministry of New and Renewable Energy (MNRE) of India has issued a draft policy for the supply of round-the-clock (RTC) power from renewable energy projects complemented with thermal power projects.

Prasad concludes: “To address this low utilization of transmission infrastructure, ‘reverse bundling’ would be done wherein high cost thermal power is bundled with low cost renewable energy in order to provide RTC power to discoms. The two measures are together expected to reverse the declining trend in coal-based capacity additions.”