Pinnacle Recycling, Akron, Ohio, launched business nearly a decade ago in March 2010. Owners Chad O’Connor, Dan O’Connor, Tim O’Connor and Gary Dalessandro had all been working in the recycling industry but wanted to start something of their own at the time. The company focuses on recycling postindustrial paper grades, including corrugated and printing grades. Chad adds that the company also handles some postindustrial plastics.

To keep costs low when starting the business, Pinnacle operated a used, two-ram baler. It also leased part of a building in Barberton, Ohio, instead of purchasing its own property. However, by the company’s third year in business, it realized it needed to move out of the leased property to purchase a larger space.

The company’s real estate broker suggested the company purchase a vacant Sears property at the Rolling Acres Mall in Akron, which closed in 2010. Chad says this property seemed unusual, yet it offered some perks. The facility was only a mile away from its old leased property; it was close to two major highway systems; and it offered enough room to grow. 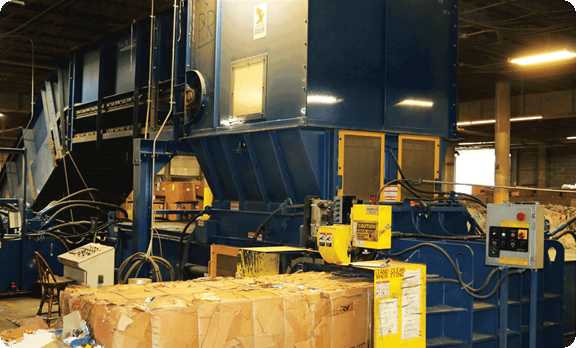 “When we looked at it, it actually was a really good fit for us,” Chad says. “It had a lot of land where we could park our trailers; a lot of space inside the building. With the highways, our trucking fleet can reach north, south, east and west really easily.”

However, before Pinnacle officially moved to its newer and larger facility, it was time for the company to invest in a new baler. Chad says the used baler couldn’t keep up with Pinnacle’s growth.

“There was too much downtime with the old baler,” Chad says. “It became the norm, that every time you walked into the facility, you’d be hoping the baler was running. It was just time to get rid of that baler. So, when we decided to move into the new building, it was the perfect time to look for a new baler.”

Initially, Chad says Pinnacle considered purchasing two balers to replace its used baler—it would purchase a large single-ram baler to handle paper commodities and a smaller two-ram baler to handle plastics commodities. Yet after visiting with American Baler, the company found what it needed in the W828-225 two-ram horizontal auto-tie baler.

“When we went to visit American Baler, they happened to be building this baler,” Chad says. “We were very impressed with it and figured we could run everything through that. Rather than have the two balers, we could have just one.”

"Our cost per ton has come down dramatically; if you can bale for a few dollars less per ton, that’s a big deal.” – Chad O’Connor

So, a contractor installed the two-ram horizontal auto-tie baler at Pinnacle’s Akron facility in August 2012 and a few weeks after installation, the company set up shop there. The facility in Akron is about 150,000 square feet. While the ceiling is only about 20 feet high, Chad says the company had more than enough room to expand in the old Sears building.

Chad says the two-ram horizontal auto-tie baler from American Baler has been “much more dependable” than its previous baler. He says everyone on Pinnacle’s team appreciated having a more reliable machine.

“Instead of being stressed out because we didn’t have enough space and running a baler that wasn’t dependable, we moved into what seemed at the time to be a gigantic place that had a brand new, sparkling baler sitting there,” he says. “It ate up everything we fed into it. That really boosted company morale.”

In addition, the W828-225 was also bigger and faster than the baler they were using before.

“We’re able to bale material much quicker,” Chad says. “Our cost per ton has come down dramatically; if you can bale for a few dollars less per ton, that’s a big deal.”

Seven years later, the baler still operates as good as new as a result of regular preventive maintenance. Chad says the company’s costs per ton baled are still low. The machine bales up to 400 bales per day, depending on the commodities the company receives.