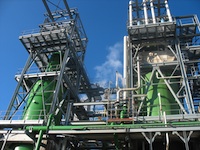 Solvay and INEOS are to combine their European chlorvinyls activities in a proposed 50-50 joint venture, which would rank among the top three PVC producers worldwide.

Under a proposed deal, the JV would have pro-forma net sales of Euro4.3 billion and earnings (REBITDA) of Euro257 million, based on 2012 figures. The combined business would have around 5,650 employees in nine countries and would pool each company’s assets across the entire chlorvinyls chain, which includes PVC, caustic soda and chlorine derivatives.

RusVinyl, Solvay’s Russian joint venture in chlorvinyls with Sibur, is excluded from the transaction.

“The joint venture will improve the competitiveness of its operations in a very challenging environment regarding feedstock and energy costs in Europe. We are convinced that this is the right project to secure, for the long term, the development of Solvay’s European chlorvinyls activities, of its employees and its plants,” says Jean-Pierre Clamadieu, CEO of Solvay.

The deal, added Clamadieu, would substantially change Solvay's portfolio of activities and accelerate its transformation into "a chemical group focused on growth and high-margin businesses.”

“This agreement will result in the creation of a truly competitive and sustainable business that will provide significant benefit to customers such as reliable access to PVC,” said Jim Ratcliffe, Chairman, INEOS AG. “The newly combined business, which will be of world scale, will be able to better respond to rapidly changing European markets and to match increasing competition from global producers."

Under the deal, Solvay would contribute its vinyl activities, which are part of Solvin –  JV between Solvay (75%) and BASF (25%) –, as well as its Chlor Chemicals business, spread across seven fully integrated production sites in Europe. These sites include five electrolysis units converted into more energy efficient membrane technology, which supports sustainable production of PVC.

Kerling, the subsidiary of INEOS and the largest PVC producer in Europe, would contribute its chlorvinyls and related businesses that include three modern and large-scale membrane electrolysis units. These assets are based on ten sites in seven European countries.