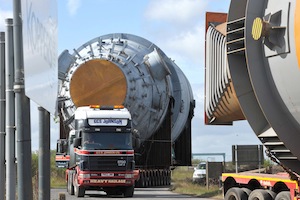 Oscar Mayer has achieved savings run into hundreds of thousands of pounds per annum through the introduction of a new waste-treament and green energy system at a UK site. The project was triggered by a 50%-plus hike in its effluent bills. Waste4Generation (W4G) supplied a system that uses a concentrated feedstock, and a high-rate AD process. (Read more)

Malton Foods Ltd has gained planning permission to build a biomass-fuelled boiler and turbine system at its site in Amotherby, Yorkshire. This is to provide process steam for its food processsing and research facility, which employs 217 people. (Read more)

Air Products (page-lead image source) is reportedly in talks with Falkirk Council about company plans to establish an energy-from-waste plant at Grangemouth in Scotland. While declining to confirm the plans, an Air Products spokesman said the company "could not deny" such talks – as reported in the Falkirk Herald and based on details received by a local group under the Freedom of Information Act.  (Read more)

Kirk Environmental has been awarded a new project with Anglian Water through its customer Saxlund International. Kirk will design, manufacture and install one glass-fused-to-steel sludge cake silo complete with a GRP roof at the Canwick STW facility. The silo will be 8m in diameter and 8.4m high and will be the latest addition to an existing anaerobic digestion facility in Lincolnshire.

Recent figures from the UK's department for energy and climate change (DECC) show that between 2011 and 2012 CHP capacity grew by almost 3% to 6.1GW, meeting 6.4% of the UK’s total electricity needs. The proportion of renewable CHP increased almost 20% in 12 months, now accounting for over 8% of total fuel used in the CHP sector.

Stobart Biomass Products Ltd has won a new, long-term contract to supply fuel to the Evermore Renewable Energy Plant – a 15.8 MWe recycled wood-fuelled CHP station to be constructed in Derry/Londonderry for start-up  by summer 2015.  (Read more)

Viridor has received a government permit for its proposed Energy Recovery Facility (ERF) in Beddington, Sutton. The ERF is expected to help eliminate landfill disposal for the four London boroughs: Croydon, Kingston, Merton and Sutton – converting around 275ktpa of waste into electricity and heat, potentially to be utilised locally. It will create hundreds of jobs during construction and 40 permanent roles once operational.

SITA UK has won a seven-year, £53m contract with Northamptonshire County Council to manage up to 79ktpa of residual household waste. Waste will continue to be sent to SITA UK’s landfill in Wellingborough until 2015, when it will go to a 200ktpa solid recovered fuel facility in Rugby. The unit will supply CEMEX with fuel for its Rugby cement kilns as part of its 25 year partnership with SITA. A five-year extension could increase the value of the contract to up to £89 million.

RES got the go-ahead from the UK government, on 24 July, to establish a 100MW biomass power station at Battleship Wharf in Northumberland's Blyth Estuary. The £250m North Blyth power station project is the first biomass development for RES, which already has a portfolio of onshore and offshore wind and solar energy projects.
Vivergo, a JV between AB Sugar, BP, and DuPont officially opened its £350-million bioethanol plant on 8 July. The 80-employee plant at the Saltend Chemicals Park near Hull has capacity to produce 420m litres of bioethanol a year. This, said Vivergo, is equivalent to a third of the UK’s current demand for the renewable transport fuel which is added to petrol. Vivergo will also produce 500ktoa of animal feed for the UK market. The JV will be the UK’s biggest wheat buyer, taking 1,100 ktpa of animal-feed grade wheat a year.

Tamar Energy has announced that work has started on a new anaerobic digestion plant near the Bluebridge Industrial Estate in Halstead, Essex. Construction is expected to last for about 12 months. The site, which received planning permission in March 2011, will be capable of taking up to 45ktpa of food waste a year from local homes and businesses.

Carbonarius Ltd, part of the Una Group, won the best energy from waste initiative at the National Recycling Awards 2013. Carbonarius is an energy–from-waste plant which uses wood to produce electricity and heat for businesses. The joint venture brings together a national plc, Una Group, partnered with an international manufacturer. The £15-million project will be housed in units built by Una Group at it’s Belliver site in Plymouth and will see 20ktpa of waste wood diverted from landfill. It will produce power and heat to be used by the various manufacturers adjacent to the plant.

CEMEX UK has signed up Decarbon to explore and implement funded energy-saving ways to reduce both operational costs and environmental impact. DECARBON provides funding to enable businesses to implement energy-related projects that lower operational expenditure. Martin Hills, CEMEX UK’s energy development manager said Decarbon would help "optimise the more efficient use of energy across our sites and throughout our processes."
Ralph Erskine’s iconic Byker Wall Estate in Newcastle upon Tyne has recently seen its district heating scheme upgraded to a new, more efficient system, powered by biomass fuel. Desco was appointed in 2011 by Your Homes Newcastle to undertake a full technical review of the estate’s 1970s district heating system and to make recommendations on how to best reduce the running costs of the system together with the benefit of reduced carbon emissions.  (More info)

Thames Water is to employ a Biothelys thermal hydrolysis plant, from Veolia, at its Oxford STW. The unit is scheduled to be in operation by March 2014. The Oxford plant will treat a throughput of 25ktpa of dry solids. This will be composed of a mixture of primary and secondary sludges produced, both at the Oxford works itself together with those imported from outlying works.  (More info)

Wood recycling firm Plevin is to open the UK’s largest waste wood recycling centre – primarily to supply wood chips for E.ON’s £120m renewable energy plant at Blackburn Meadows near Sheffield. As exclusive suppliers of fuel for the biomass-fired facility, Pelvin plan to install the £5m facility on a 50 acre site in Hazlehead, South Yorkshire. Timed to coincide with the start of our contract with E.ON, work is due for completion in early 2014. (More info)


Diageo has just completed a £105m investment program at its Cameronbridge distillery, the largest grain distillery in Scotland. Part of this improvement plan includes the installation of a £65m bio-energy plant, using the expertise of Veolia and BCI Process, who were responsible for the manufacture and installation of the mechanical services and support structures.

HRS Heat Exchangers has received two orders for the delivery of heat exchangers for sludge and waste food applications for a major environmental company in the UK. One order involves the application of HRS' double-tube heat exchangers for the cooling of sewage sludge after a thermal hydrolysis process. The other order will see HRS supply a complete turnkey package to continuously pasteurise mixed food waste to Animal By-Products Regulation standards.

Metso has been awarded its 5th repeated order from the CNIM group for the automation of another greenfield waste-to-energy plant in Great Blakenham, Suffolk,UK. Metso will supply an extensive Metso DNA automation system and safety system to the new plant. This order comes after similar ones for WtE plant in Turin (Italy), Tallin (Estonia), North Hykeham (Lincolnshire, UK) and Four Ashes (Stafford, UK).

Lorien Engineering Solutions, headquartered in Burton on Trent, has announced its highest grossing year to date in its 28-year history, and is also now serving its largest ever customer base across the food and drink, brewing, life sciences and sustainable energy sectors. The firm said it had also achieved significant international expansion, having relocated its Poland office to larger, more modern premises in the south western city of Wroclaw, and undertaken assignments on behalf of clients in Russia, India and China.


Offshore Group Newcastle (OGN) has been selected by Talisman Energy (UK) Ltd for the engineering, procurement and fabrication of the jacket, which will form part of a new bridge-linked platform within the Montrose Area Redevelopment (MAR) Project. In addition to extensive recruitment opportunities, the company foresee that a significant amount of subcontracted services will be sourced from the UK, which in turn will generate additional jobs through the local supply chain and beyond.