Silicone is a little like concrete. Both are taken for granted, and the world as we know it would be hard to imagine without either. And while concrete keeps a building standing, so silicone (or more specifically, silicone extrusions) help to keep the machinery within that building functioning. But unless you’re working directly with both, they can be easy to overlook.

The food processing industry is no exception to this rule, and many different grades of (FDA-approved) silicone cords, strips, gaskets, tubes and profiles are all necessary for functioning food production lines. And silicone, with its many advantages over other competitive materials, now makes up one of the most dominant types of rubber extrusions used in food processing and production.

Yet advantages have brought complacency in the industry around what to do with silicone once we’ve had our use from it. 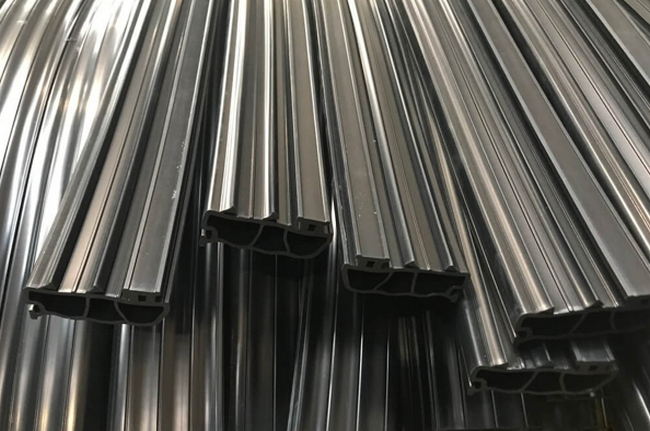 Silicone is not recycled enough after use. This is actually down to a lot of varied factors; some of them complex. But the main reason is that it is difficult to recycle because it is hard to break down.

In some ways, silicone’s resistance to biodegradability is a good thing. It does not fragment into microplastics, and it doesn’t react with other chemicals in the Earth. All this limits how much it can spread through the environment, preventing ecological harm.

This, I believe, is the reason behind our lackadaisical response to recycling silicone. After all, it just kind of sits around. There is no urgency to deal with it like there is with plastic. But silicone use is increasing across all industries, and especially in food processing — so this complacency cannot go on forever.

Now, there are some companies operating today that do work to recycle silicone, but there are by no means a lot. This may be due to the costs incurred in breaking it down, and also due to a lack of resources. (After all, if no one is looking to recycle in the first place, then these companies won’t be getting the supplies they need to remain functioning).

The current best method to break silicone down includes cutting it into small pieces and then placing it in a high-temperature, high saline environment. In such a culture, chemical reactions will begin to undo silicone’s molecular bonds. There are other ways to ‘recycle’ silicone that also make good short-term methods (and are much easier to do). For example, shredded silicone can be repurposed and reused to make rubber mats.

The market is there and the environmental impetus is certainly there. But while silicone is tough, nothing lasts forever and after 500 years it will start to disintegrate. So, our current ways of thinking, and pan-industrial attitudes need to change. I have heard, anecdotally, that recycling requires strenuous effort, and for silicone to be carted off by the “tonne-load”. Poor attitudes like this are unhelpful, but I am confident if we implement a wider strategy of networking and accessibility, to make the recycling process cheaper and easier, then we will be able to turn things around rapidly.

Silicone use in food processing is growing. There are several reasons for this, including cost-effectiveness and practicality. But a key reason is because FDA-grade silicone has long been understood to be very safe.

Not everyone is convinced, however. Critics fear so-called “siloxanes”, which are trace elements of silicone that can crossover into food — and this crossover may increase in food that is naturally high in fats. It’s worth noting that these fears are only really apparent when it comes to silicone-food packaging, and not with the silicone that is used in the actual process of food production itself.

But nevertheless, if people are concerned, we need to listen to their concerns. As of right now the biggest area of concern are cyclic type siloxanes. These are odourless, colourless, and are sometimes purposely added into our face creams and moisturisers. The evidence that they are harmful to human health is lacking, but nevertheless some people worry that if we are exposed to enough then crossover levels could pass what’s known as the “1000 Dalton limit” — in which the traces could make it inside the human stomach.

The reaction has been such that the ECHA (European Chemicals Agency) and REACH (European Registration, Evaluation, Authorisation and Restriction of Chemicals) have decided to limit three types of silicone — D4, D5 and D6 respectively, and to even try to ban them altogether. Because the research is not at all clear, it’s no surprise that the Global Silicones Council has launched a campaign against the EU to try to overturn these limitations.

So, given that the academic jury is still out on whether silicone is harmful to health or not, what can be done in the meantime to relieve everybody’s anxieties? We could start by intensifying the silicone curing process. A study by the Technical University of Denmark found that, with more intense curing, less siloxanes were found to crossover out of the material. “Curing” is the process of turning silicone from a liquid into a solid. To me, a combination of intense curing, along with better and more transparent regulatory standards, could go a long way to appeasing those with concerns and snuffing out siloxane crossover.

In the meantime, however disruptive, the EU’s restrictions on silicone D4, D5 and D6 could be a good thing. With increased siloxane monitoring, it could be just the stimulus the industry needs to find alternatives that truly are safer for us and the planet.

Thanks to its practical uses and numerous benefits, silicone usage is here to stay. It’s important to remember that silicone has great benefits. For example, it has been estimated that for every tonne of carbon dioxide used in the manufacturing process, its application in the long run ends up saving about nine tonnes over time. It is an important material for future development.

So, we need to put to bed once and for all everybody’s environmental and health concerns. This, I believe, isn’t that difficult to do. We just collectively need to pull together, to create a culture where recycling is encouraged and easier, and to argue for more transparency and accountability.

More in this category: « SinnovaTek appoints veteran CPG executive Jim Holbrook as Chairman of the Board of Directors Alfa Laval partners with Wayout to develop micro-factories for sustainable water and beverage supply »
back to top